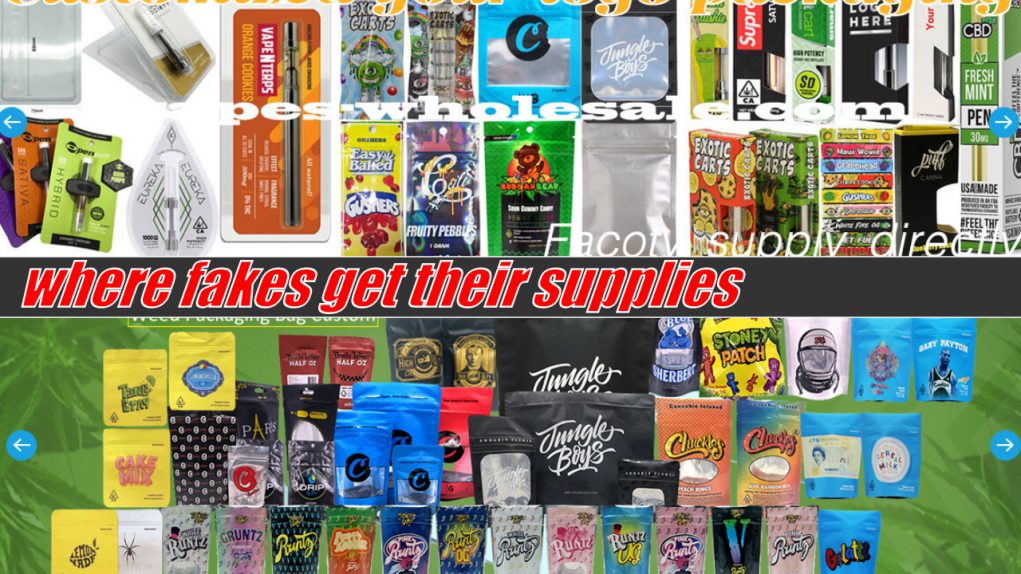 Ever since we published our guide to the Top Ten Fake Cart Brands, it’s been out most popular post with lots of enthusiastic feedback and discussion. Readers have suggested to us that it would be helpful to post updates on the market to help them spot the fake brands before they roll out to the street. So hey, we’ll go one better!

DHGate is the #1 seller of empty cart packaging

Alibaba Group, which we have mentioned before, seems to have turned over a new leaf as far as vaporizer gear goes. The branded vapes are gone, even the venerated Dank Vapes! They have plenty of other vape gear anyway, along with accessories, but no fake “brands.” Alibaba, however, owns DHGate and numerous other outlets, which have taken up the slack. DHGate is the prime online retailer for empty vape cart packaging.

Sorting by “best selling” makes sense to see which brands street vendors are ordering. And our top brands are: 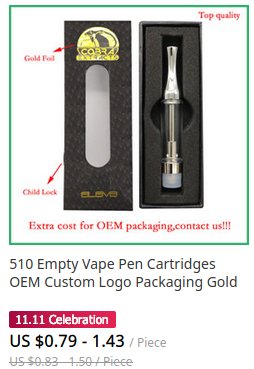 Cobra Extracts is a real company, whose products are distributed in dispensaries throughout California. We’ve reviewed Cobra before. Now the curious thing here is, we don’t encounter many users reporting fake Cobras on the street. Yet it’s the top-selling branded fake on DHGate, in fact it’s available from several vendors. Where are they all going? We see a lot of Cobra popping up at online fake cart scam websites, but they take your money without sending anything, so they have no need for stock. Is this the new “Dank,” where people are just vaping what they can get and hope for the best? It’s a mystery. 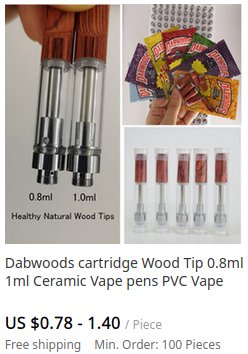 Ah, the old classic! Dabwoods and its family of derivative “brands” – Dankwoods, Backwoods, etc. – were one of the first brands to be heavily counterfeited and have become the poster child for busted vape brands. We still see Dabwoods banners at the occasional underground sesh and related flea-market events, but like the other fake classics, nobody expects anything but street plug oil out of one. No trace of the original company has ever been found. 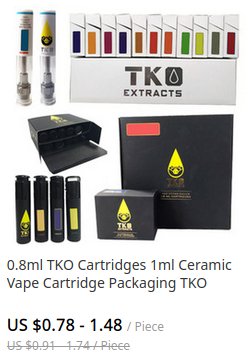 TKO! The black market brand that would not die! We’ve covered TKO fakes extensively, and since then we see thousands of searches just for this brand, so we know people out there are finding them. TKO as a company does exist, but if you check them out, they gave up on cartridges entirely and now sell edibles exclusively! So there you have it: every TKO cart you find in the whole world is 100% fake. That’s a shame, because you can see the black market forcing legitimate companies out of the market. 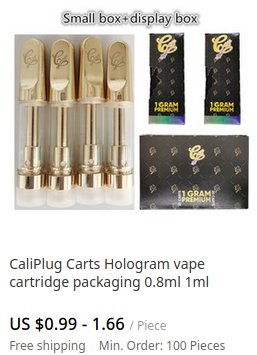 Yes, that Cali Plug garbage isn’t going away either. We never found a real company behind anything named “Cali” and its vast menagerie of descendants. Over at our fake carts wiki which we host on Reddit, there’s dozens of Cali-this, Cali-that spotted, and they all come up fake. No sane company would dare start up named “Cali” anything in the vape industry, because the name has been burned for so long as synonymous with street plug oil. Cali Plugs are another common sight at underground events.

We promised to “go one better,” so let’s switch focus from DHGate to introduce some other fake cart packaging venues. They have popped up all over!

This explains why business seems to have shrunk at some other online retailers. Vapes Wholesale has just about every fake brand you can name. We’ll speed this up here with some groups of fake brands, because you have seen them here many times before! 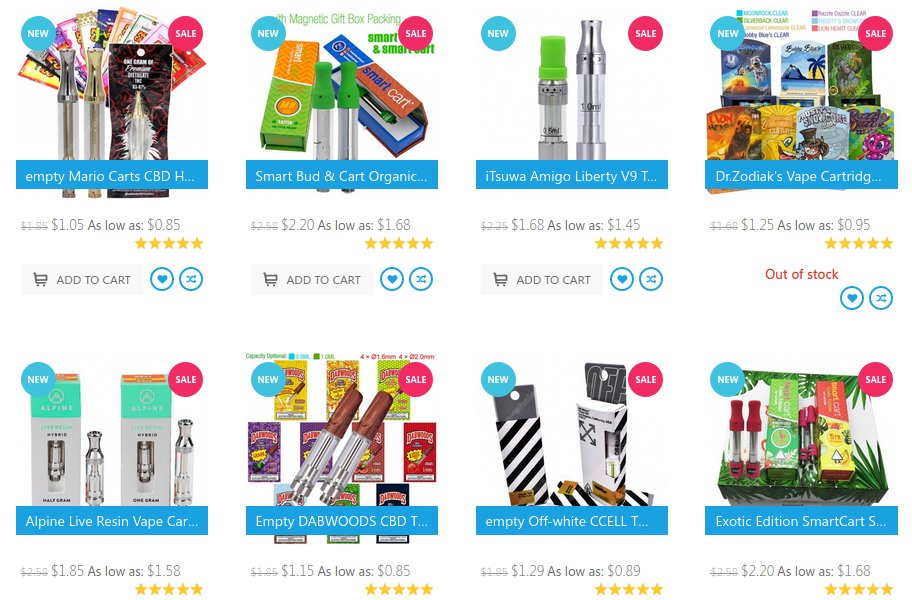 We see Mario Carts, the dreaded “Smart” Carts, the immortal Dr. Zodiac, Alpine, Dabwoods again, the obscure Off-White, and Exotics. The iTsuwa Amigo Liberty there is not a cart brand, but counterfeit hardware.

Not much shocking here, but Alpine and Off-White are two brands we could have sworn had disappeared. 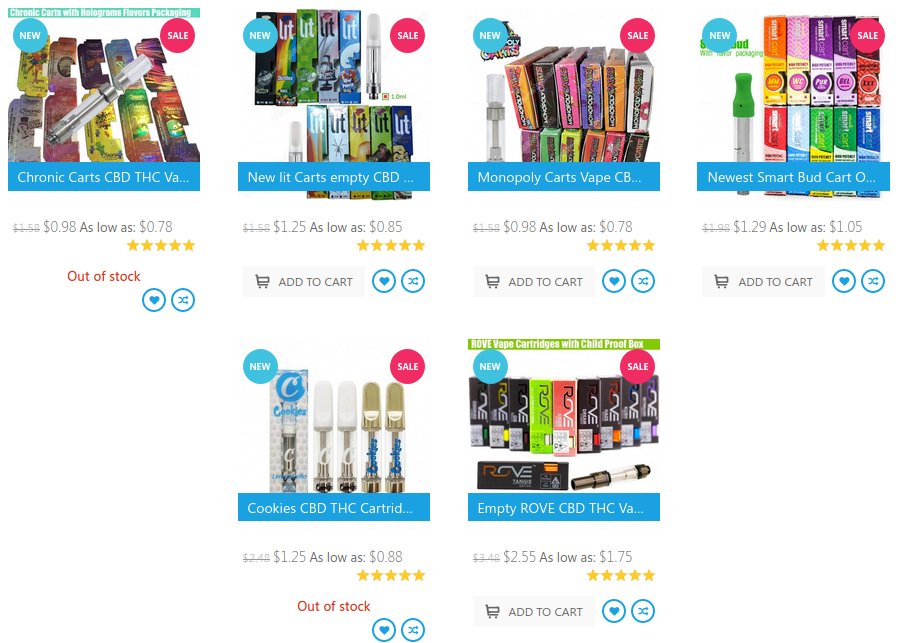 Second row, we have Chronic, Lit Xtracts, Monopoly, Smarts again, Cookies, and Rove. To unpack: Lit Xtracts is one we haven’t gotten around to yet because, while they’re obviously faked across the black market, we had somebody raving at us that they’re a legit company and we’re waiting for them to produce proof. As for Rove, it’s a pity because they are a nice brand and even fought back against the counterfeiters, but they’re just faked on every street corner. Check back with them often, because they change their packaging just to defeat the fakes.

Cookies is complicated. There really is a Cookies dispensary on Melrose Avenue in L.A. It doesn’t get any more authentic than that. They do sell cookies-strain weed and their own cart products, but seem to turn a completely blind eye to the knock-offs. So if you encounter a Cookies cart, it’s fake unless you are standing in that store.

Carts Packaging is even less pretentious than its peers. You want branded empty vape packaging to fill on your own, they are right up front on page one. Their stock is eerily close to the main fake carts we’ve covered, almost like you could go by our fakes tag and hit every brand. Well, let’s see the rogue’s gallery:

That repulsive Sherbinski, crappy looking Cali packaging, the infamous Muha Meds, the Lion’s Breath we’re sick of hearing about, and Glo Extracts, which sticks around like a bad rash.

Some idiot at the BlackList.XYZ posted a single walk-in R&D test for a single, self-filled Glo Extracts, after which every street plug and their customer now insists that they must be legit. Again: An R&D / QA test sheet means NOTHING, and we’re about to start calling out the labs that even hand these out anymore because they are used for nothing but fraud and abuse. We see Glo Extracts on every empty cart package site, no company exists, ALL GLO EXTRACTS ARE 100% FAKE!!!

Still on Carts Packaging, we have Select Elite, Pure One, Rove again, KRT Yang, and Golden Gorilla. Both Select and Pure are real companies struggling to fight off counterfeiters, but KRT is 100% boof. For awhile they were the top of the fakies market, but apparently they blew up so fast that they burned out.

Golden Gorilla… We never did cover that one, but it does show up from time to time on articles like these. It just seems too ridiculous to be true. It sounds like it should be a brand of kid’s cereal or something.

Wow, 1Match boofs are still kicking! There’s Eureka, KRT again, Dime, and poor old West Coast Cure which was getting counterfeited from day one and hasn’t recovered yet. Dime is a real brand which is seeing counterfeits. As for Eureka, they were faked before, the real company radically changed their packaging, and the counterfeiters caught up with them again!

Many more fake cart packaging outlets out there!

We have a handy guide to every online source to order branded vape cart packaging. We have it on the forums because (a) you have to have some reason to go there, and (b) we were thinking readers can make that a live thread by posting there whenever they find another one of these stores. They pop up like mushrooms after rain, surely we missed some? As new sites pop up, we keep that updated.

As always, we close by reminding you that unlicensed, unregulated brands can contain anything. You are putting your own life at risk with every puff!

There is a deadly epidemic of lung illness tied to black market cart usage. Vaping-associated pulmonary injury has so far claimed 64 lives and hospitalized more than 2700 users. This was the main health story in the news before Corona Virus COVID-19 cases pushed it off the front page, but people are still getting sick off boof street carts. Unregulated vape carts could contain heavy metals like lead, pesticides, cut such as Honey Cut, or simply bunk. Or they could be fire if you’re lucky. But a lot of people in the hospital right now weren’t lucky.

Incidents are still happening. Days ago one reader posted in our forum about a Friendly Farms fake that gave her seizures, and there’s many more horror stories where those came from.

Readers, you have the floor. What do you see going down in your neck of the woods?