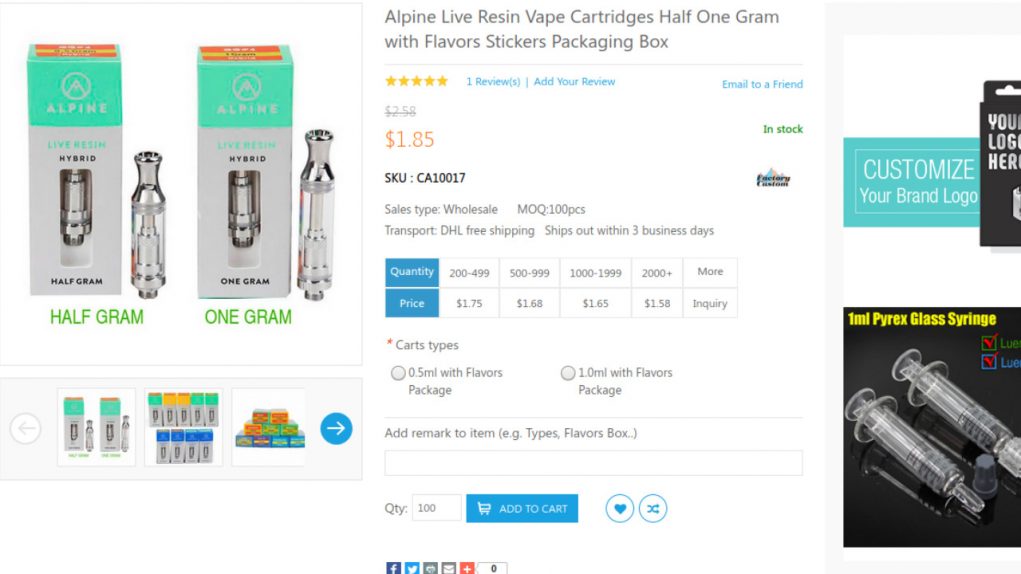 Carts are the new wave, everyones smoking carts. But here’s the deal, If you live in a state where cannabis is illegal, there’s a high chance that you’ll encounter some fake stuff. And if you’re paying less than $50 a gram then you’re definitely smoking something fake. First off, packaging can be bought online on a very very cheap price. We’ve spotted Fake Alpine Vapor empty cartridges and packaging sold online for about $1.50-2.50 per piece.

They’ve clearly stated there this notice: “Please notice this is a high quality clone product, and it doesn’t include oil.” Which is pretty obvious that you need to be vigilant on what you’re buying since any people can buy the packaging and cartridges and put whatever they want in it.

Next, Make sure you’re buying from reputable retailers or dispensaries. Also, The packaging will never have the THC percentage printed on it. It should just say the actual brand name and a little THC warning on the packaging. The THC percentage should be on a sticker as per Alpine carts it should have the sticker on the side.

Alpine Vapor updates their packaging with lines going around it. Check that first to make sure it is real.

Make sure you check it out carefully because it seemed like Alpine Vapor has updated their packaging since there’s a lot of fakes ones that have been produced in the market. If you’ve been following their products you’ll notice the big change on their packaging with their more colorful and vibrant packaging.

Here’s the new packaging by Alpine Vapor, and first thing that you’ll notice are the lines on the packaging. The old ones and fake ones doesn’t have it, so make sure you keep an eye on that detail.

As I’ve mentioned awhile ago, THC percentage should not be printed on the packaging itself. But Sometimes fake one’s will have the THC percentage stickers also because they fake it as well! You can easily buy everything from the packaging to the Instruction manual, that includes the THC stickers.

You can buy the actual cartridge online (empty ones) at $1.53-2.50 a piece. Then they put whatever they want in it which is the scary part because you can be smoking anything in the world, put them together then sell it for $40-50 and people think they’ve got themselves a deal.

Another way to check if what you bought was fake is to do an oil test. You can do it by turning the distillate cartridge over and check whether the oil moves fast. If it does, then it’s a bad quality oil which means that it’s most likely fake. Another way is to check for bubbles. If it has bubbles in it, turn it over and check if the bubble moves or runs to the top. If moves to the top quickly, then most likely you’re looking at a fake one but when it stays still and moves slowly, then you’re looking at the real one.

You can find find the legit ones on their store locator where you’ll see the list of stores that sell the original one or visit their Instagram account for more information.