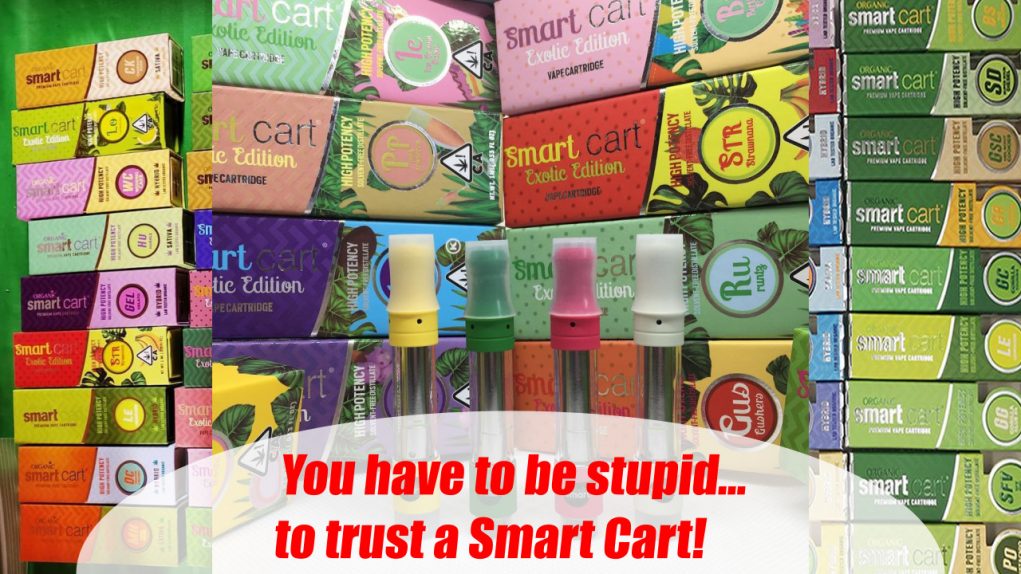 Smart Carts are an ironically-named brand of THC cartridges that we covered here at Dab Connection way back before your humble author joined the ranks. Our staff writer there attempted to make a review of the cartridge even knowing it was fake. You have to hand it to him, that takes guts! 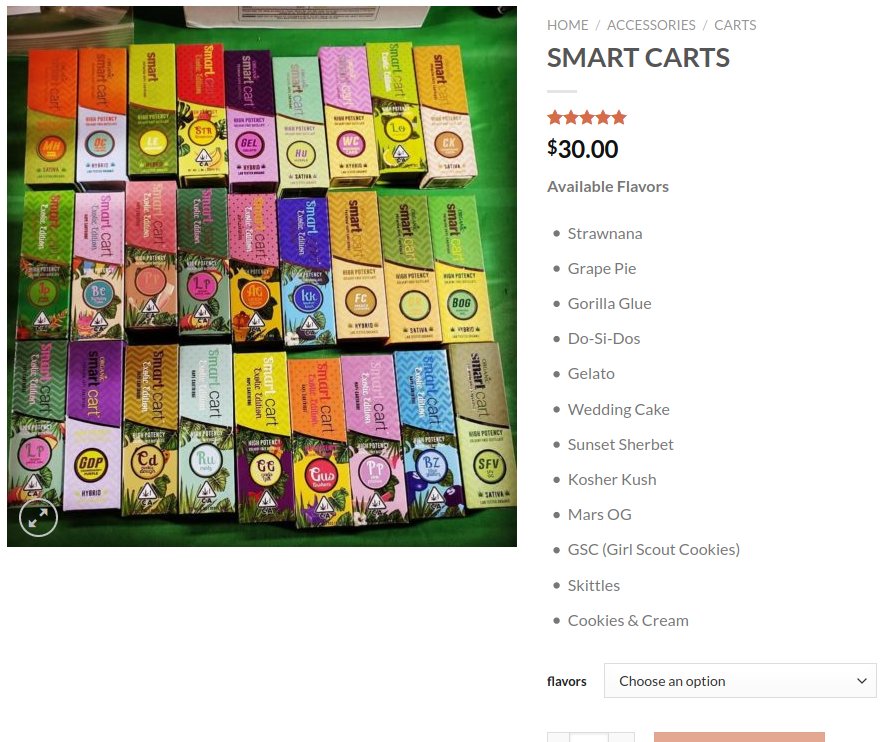 Smart Carts are a fake brand, a widely distributed brand, and to our knowledge we have never uncovered an actual original company behind them. They are so heavily distributed among Chinese black market vape packaging retailers that they made #9 on our top ten “fakest” carts post. Which should tell you that it’s a brand to avoid no matter how much you trust your plug.

We base that top-ten list off the brands which show up most prominently on DHGate, a main conduit for knock-off Chinese goods coming into the US. That list is kind of like watching the stock market go up and down; the names switch around from week to week. Currently Smart Carts don’t show up there until page 2.

For the record, most of the top names in fakes right now still include the top ten we mentioned before, plus the brands we call “the three stooges”: Lion’s Breath, Muha Meds, and Big Chief. They cause more drama than every other brand combined that we’ve mentioned here.

If you want a different view of the fake cart market, we have a whole list of other empty cartridge packaging retailers here. Some of those also have Smart Carts and the rest of the gang. This garbage just goes on forever.

When we say “drama,” it’s because the three stooges brands we mention have somebody currently behind them, either trying to force the brand into the legit ranks or struggling to gain control of an ownerless brand, we can’t tell. All we know is that whenever we say “boo” about them, they squeal like piggies. Try searching Instagram for the #smartcarts hashtag, and Lion’s Breath, Big Chief, and Muha Meds all show up anyway because fakes of a feather… 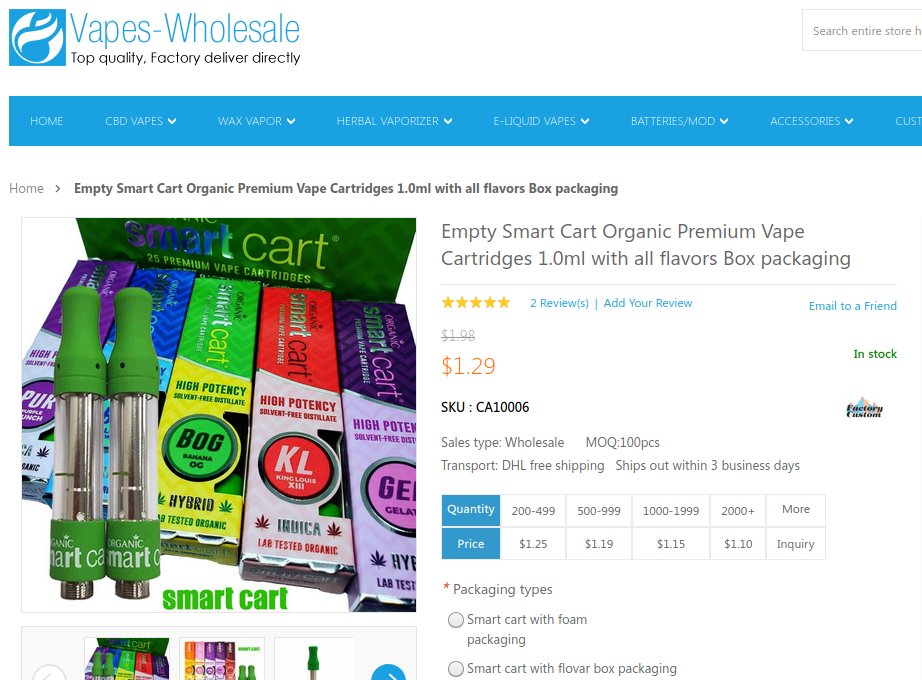 Smart Carts do not have a single soul behind them

We’re a big enough website in the cannabis blogosphere that whenever we mention any brand at all, we usually have somebody associated with it pop by in email, forum, or comments. It’s like summoning a djinn, they just pop right up.

With Smart Carts, we have NEVER found an owner, a main website, a contact, a license, an application, an email… NOTHING! The Smart Cart vape cartridge brand belongs to Casper the Friendly Ghost for all we know. We do find an alleged “organicsmartcart.com” which is now a hacked spamsite. Of course we find millions of Instagrams with rubber-banded boxes of boof.

In fact, the domain for “Smart Carts dot com” is actually a maker of utility carts, of the sort used for gardening, maintenance, construction, and whatnot. They never asked to dragged into this situation, we’re sure!

This self-driving garbage can remembers to take the trash to the curb for you https://t.co/b3zzROcSfT pic.twitter.com/zrnL0WQCDh

We also find a self-driving trash can called “Smart Cart,” which is both wicked cool, and a fitting metaphor for where you should be consigning any Smart Cart THC vapes you find.

Why were we so naive about fake carts at the beginning?

Obviously, like everyone else, Dab Connection had to find out about fake cartridge brands the hard way. We started out just being a review site way back when. It was only after we got our hands on a few bunk cartridges that we started to get suspicious. As it is, we were still one of the very first sites on the web to break the story of fake carts, and eventually the vaping lung illness epidemic attached to them. 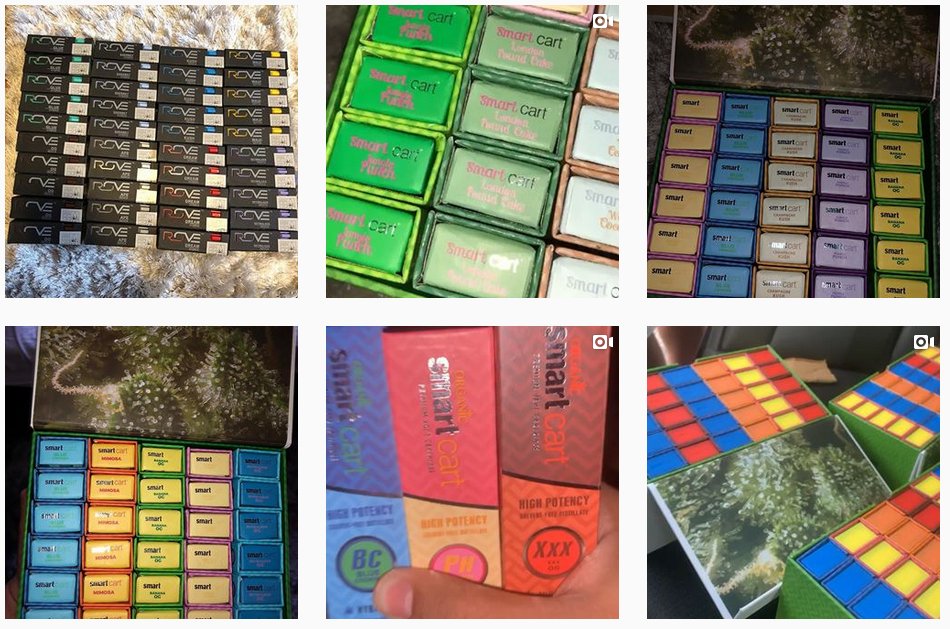 But still, if you go back through the early days of this website, you’ll see us trying to review brands which were obviously fake garbage, which we criticized as such, but still had not discovered the fake packaging cottage industry where just anybody could buy the package for pennies and fill a cart with hot dog water if they wanted. We have kept these posts up for historic reasons and because they still get the message across kinda, but we added disclaimers updating them as being about brands we now know are 100% bootleg packaging with no central source behind them.

The whole vape industry is still only a decade old, with legal cannabis even younger. It may seem incredulous that we ever lived in a world without fake THC vapes, as much as we talk about them now, but that’s how the ol’ burrito rolls around here.

Are Smart Carts finally on their way out of Dodge?

Can we make room for companies more deserving of the term like utility cart companies and robot trash cans now? Open your thoughts to us here or in our forum.