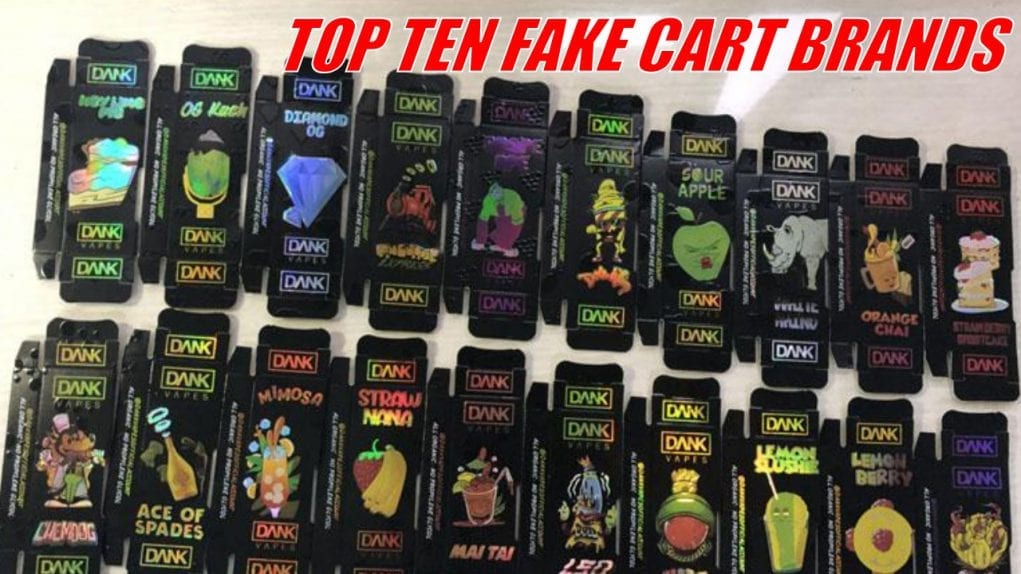 Being a recreational vape fan in the 2020s is tough. The epidemic of vaping-related lung illnesses has so far claimed 55 lives and hospitalized 2.5K users, from tainted fake and counterfeit carts. This news has been out there for months, and yet just this last week a string of illegal vape shops in L.A. were busted.

The black market carts at the unregulated L.A. stores tested out as: “75% of the vapes contained undisclosed additives, including the thickening agent vitamin E acetate, which has been blamed by federal regulators for the majority of lung illnesses tied to the outbreak.” Not only that, but THC levels in the bunk carts were as low as 18%, despite being labeled up to 85%.

What’s a vaper to do? We can’t do much (we wish we could), but we can try to help consumers out there make the most informed decisions. So here’s a list of top faked carts on the black market, along with a little inside info on each of these brands’ backstory.

The Top Ten Vape Brands To Watch Out For…

We’re going by DHGate, a Chinese eCommerce website which is one of the chief conduits for black market products entering the US. They have a product category called “Wholesale Atomizers,” which is the category that moves all the fake THC carts. Sort by “best selling” and you know the brands most likely to be currently on the street.

Note that they are sold EMPTY! For as little as five cents, you too can buy an empty cart and fill it with whatever liquid pops into your mind, and then become a distributor of one of these “brands.” We’re not saying these carts are automatically bad. It depends on the filling, or in the case of counterfeited legit brands, whether you got the cart at a legit distributor. But when you see one, and you are not going through official channels, you should see red flags.

UPDATE – We have been notified that the recent reports of the death of Kingpen and West Coast Cure have been greatly exaggerated.

TKO was one of the original counterfeits we covered back in May 2019. There is a real TKO brand, follow them to stay up to date on the latest packaging. Here is TKO’s CDPH license number. As we mention, TKO fakes are pretty easy to spot, and it doesn’t look like the black market has bothered to update the old style look at all.

The TKO fakes are even more obvious now! TKO has updated their packaging and cartridge, everything is different from the DHGate picture.

Cookies should come as no surprise. “Cookies” is originally the name of a strain of weed. Then a high-profile rapper named Berner teamed up with G Pen to come out with a line of vaporizers under the Cookies brand name. We have covered a post on telling fake Cookies from (what we believed to be) real, but we’re suspecting now that the massive volume of fakes out there have driven the original oil distributor (High Flyers, last we heard) out of business.

SOS! If you are a real Cookies pre-filled oil cartridge distributor or know definite, concrete proof of a licensed oil distributor, please let us know in the comments and we will correct this post.

The distinctive abstract crown logo hasn’t changed at all. We’ve covered West Coast Cure fakes before, however, even the original company (WCC Managment) was once a street brand that tried and failed to get licensed. The website of WCCmgmt.com, listed under West Coast Cure’s license application, is now just a dead Godaddy domain.

HOWEVER, we have received word that West Coast Cure lives on in a new domain. They have a CDPH production license there and, more importantly, a distribution license, both California. But their products menu is now just Pods, Concentrates, Flower, and Pre-Rolls, so any oilpen products out there might still be bunk if we’re not mistaken. But it’s good to see the regal crown on a legit product at last.

We get tired of looking at DabWoods around here. Known by a million variations including “DankWoods,” “DeepWoods,” “BackWoods,” etc., we’re going with “they’re all fake and always have been.” We tried flushing any legit original company out of the bushes way back in August of 2019. We came up with zip, zero, zilch. The theory is that there was a brand of pre-rolls out there, but even WeedMaps doesn’t think they’re licensed anymore.

DabWoods is a case of a fake brand that is nothing but packaging. All bunk, no skunk.

We see Danks in our nightmares! Not only have Danks been one of the most notorious brands reported by lung illness victims, but we have searched to the ends of this Earth and have found no original company. To add to our efforts, many websites have also investigated the Dank brand name trying to find a legit company, such as this excellent write-up by Emma Betuel at Inverse. She, too, met nothing but dead ends.

Dank is the fakest fake brand there ever was! Dank is the poster child for lung illness, the reigning king of inhaling vitamin E acetate, the laughingstock of fake brands. If you see this brand anywhere, you should be doubly cautious, because you have to be really stupid to try to pass off a Dank.

It’s been so long since we reviewed Kingpens we forgot they were out there. Yet, judging by the high search traffic volume, many people are still encountering these. Kingpens were looking to be closed out, but the company is back now.

We have handy proof that Kingpen is/was produced by a real company named “Clean Cannabis Initiative, LLC” on Wilshire boulevard in Los Angeles, California. We known that because they were named in a lawsuit alleging that their pens tested dirty. It has since become one of the most widely publicized cases of a lawsuit concerned with a faulty product. That company is licensed to Paracorp, Inc., the biggest thing we can find out about them being how to serve them with legal papers.

HOWEVER, we have been notified that there is a Kingpen official site, with vape cartridges now featuring a QR code validation. That is one older and wiser company, for sure. Validate your Kingpen carts there, problem solved.

Another one of the most consistently counterfeited brands we’ve seen. Brass Knuckles knock-offs could practically fill their own category, but we try to keep a post updated for spotting fake BKs with packaging changes.

We feel bad for Brass Knuckles, even if our review of their product wasn’t the most enthusiastic. Then there was a lawsuit out on their brand too, due to allegations of dirty testing oil. But Brass Knuckles OG stays in business still, so we respect them for not turning chicken.

Besides “Dank,” the two words that can make a Dab Connection staff member have to suppress a gag reflex are “Cali” and “Plug.” Cali Plug is another completely fake brand we’ve investigated, being nothing but packaging. This is another fake brand which has spawned a dozen mutations, so the same goes for “Cali Cart,” “Cali Confidential,” “Cali Piff,” and so on.

There have been glimpses seen of a “Cali Plug” “company,” but they bill themselves as a “lifestyle brand,” selling hats and Tshirts only. They show up at festivals with a tent, that sort of thing. In any case, there is no registered, regulated distributor of oil in anything called “Cali Plug,” and certainly not in packaging that looks like Robert Crumb puked on it.

The ironically named “Smart Carts” got a bad review from us for their bunk cart, and even then we ascertained most of the Smart Carts out there to be fakes. We were skeptical about the existence of a company behind the brand at all, even then.

We’re now pretty sure all Smart Carts and Smart Buds are fake. Both brands, the last anyone could find out, were run out of two websites, smartbud.ca and smartbud.us. Both of those are parked GoDaddy domains, so whatever subterfuge of pretending to be a real company behind this brand there was have since vanished.

And this brand… is one we’ve never covered before! GLO Extracts does have its own website, with its own extensive authenticity verification system, and here they’re getting counterfeited already.

Whelp, we’ll have to check out GLO’s product sometime.

There is a deadly epidemic of lung illness tied to black market cart usage. Vaping-associated pulmonary injury has so far claimed 55 lives and hospitalized more than 2.5K users. Unregulated vape carts could contain heavy metals like lead, pesticides, cut such as Honey Cut, or simply bunk. Or they could be fire if you’re lucky. But a lot of people in the hospital right now weren’t lucky.

If anybody has more information to share on any subject we touched here, please share it with the community here in the comments or in our forum.

ASKING ABOUT OTHER CART BRANDS:

This post was originally just to show the *TOP TEN* most common faked brands. There are infinite brands out there and only so many licenses, so there are many more fake brands. We encounter dozens every week. The top ten even rotates over time.

If you’re asking about a cart, please take it to our forums and post a thread in cartridges. It helps a LOT if you can provide photos of the packaging, where you got it (at least the state), and if you got it from a dispensary, delivery service, swap meet, plug, or whatever. Our rule is, if you didn’t get it from a licensed dispensary, it’s usually fake.