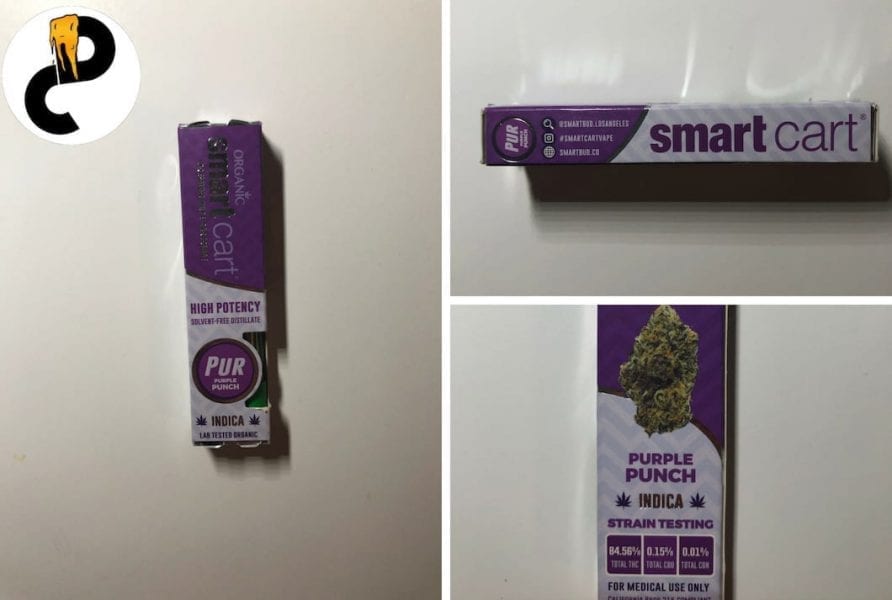 Smart Cart, also known as SmartBud.CA on instagram, is a smoke shop based in California. From cartridges to selling grass, this company is know for having high quality products. We picked up Smart Cart Purple Punch and did not like it one bit. The reason for this is because this specific cartridge is not an authentic one. It’s from their  previous packaging that they discontinued. Because of how many fakes there are, they decided to cut off their previous packaging. Therefore, if you ever come across a discontinued package, than it definitely is a fake Smart Cart.

Smart Cart sell authentic cartridges, but we picked up a fake, which is most of them in circulation

First off, Smart Cart is a legit company with authentic and tested products. Although they do sell cartridges, they have been focusing mainly on selling straight weed. The reason for this is because there have been so many fakes out, they had to discontinue their old packaging. There is so many packaging being sold from Chinese manufacturers, they had to cut out the last packaging.

That being said, most Smart Carts out there are fake. There are way more fake than real, so if you have a Smart Cart in your hand and you did not buy it at a California dispensary, way more likely than not it’s a fake.

Discontinued cartridge turned out to be fake

Here we encountered the old version of Smart Cart, before they updated their current packaging. Because they cancelled these packaging, the oil is not original and may be filled with anything inauthentic. We tried Purple Punch and would not recommend them to anyone. Personally, I didn’t like it one bit and it had a terrible taste to it, it could’ve been filled with anything, it’s difficult to trust the old packaging.

So we picked this particular cartridge and didn’t like anything about them what so ever. As mentioned earlier, if you ever face these packaging, than without a doubt they aren’t legit. We didn’t like these so much to the point we literally threw it out after just a few hits.

It’s very unfortunate what the black market can do and cause for these authentic companies. Without people being aware, it really can damage the positive reputation that companies created for themselves.

At first glance, I thought that the oil looked great. It seemed to have a nice and thick consistency and has a very clear and clean color. Doesn’t move fast one bit. But never let that believe you that the oil is authentic and amazing. When I did try this, I couldn’t stand the taste or anything about the cartridge itself. We really couldn’t find anything positive about these old and fake cartridges.

This Fake Smart Cart has a horrible taste to it

This had to be the worst feature of this fake cartridge. The fist hit, it just tasted alright. But after the second and third, it just tasted disgusting. From hitting it to the after taste, it really did make me gag for a bit. We disposed of it after moments of hitting it.

Not very efficient and has a terrible hardware

First off, with this cartridge you do need either a specific battery or a mod/adapter. We aren’t too sure if it’s the same with the original Smart Carts yet. Regardless, with this fake one, the hardware wasn’t good at all. We tried using it with multiple batteries, from the Vessel Battery to an Elf but couldn’t screw on. This is because of the 510 thread, it was too thin.

Apart from that, this cartridge doesn’t even burn nice nor evenly. We did manage to find a battery that did fit, the E Leaf Pico. At first, we tried it with anywhere between 2-5 watts but couldn’t get a good hit. We aren’t sure if this is because of the thickness of the oil or because of the hardware of the cartridge itself. Either way, we bumped the watts up to 12W and hated this fake Smart Cart even more. We got a better taste of this cartridge and did not like it at all. It was so nasty, after a few hits, we trashed it.

How to identify Fake Smart Carts

There are various ways to identify a fake Smart Cart. But the key is if you don’t have the updated packaging, than you definitely have a fake with you. And if you do come across one of these, just throw it out and don’t risk your health. You never know if it contains harmful pesticides nor artificial flavors.

As said multiple times, Smart Cart only make these kind of packaging shown above. This update was recent due to the amount of fake cartridges being distributed.

Cartridge design is Zinc Alloy rather than Copper

Regardless if you encounter a fake Smart Cart or legit one, this is another way to see if yours is authentic or not.

Show below is a list of inauthentic flavors. If you ever come across any one of these, we don’t recommend you to consume them.

If you ever encounter these fake Smart Carts, we do not recommend you buy them at all. We’ve said this many times through out this article and will keep mentioning it again. You really can’t trust these fake cartridges, especially when you have no idea what’s in them. It’s not cool because people are unaware about this and believe some fakes are actually legit. Yeah some people may say that a few carts taste amazing and do get you high. But one day, you just might encounter a fake like the one I did, better yet worst. I didn’t even get high off of it just because I really couldn’t stand the taste. I hit it so few times, I felt the necessity to get rid of it.

We weren’t kidding when we said that we had to throw it out after just a few hits. We didn’t get the full experience of this particular fake Smart Cart just because we really couldn’t stand them. We do not recommend you smoke anything inauthentic or from the black market. Don’t get me wrong, some fake cartridges may taste great and get you baked. The only thing is that you really can’t trust them. They may contain anything from artificial flavors to dozens of pesticides.