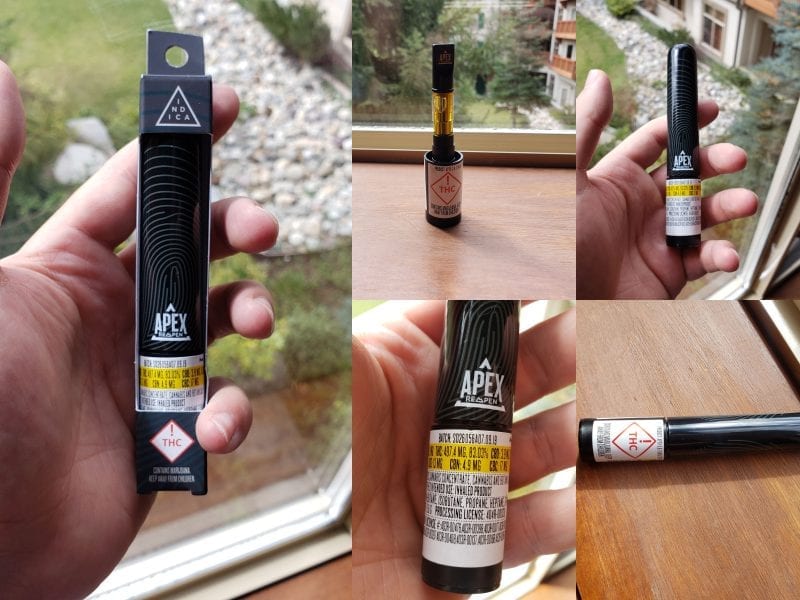 I started out using this Apex RemPen with just a standard non-variable battery. Needless to say, it didn’t really hit that well. It seemed pretty weak, it wasn’t terrible but it wasn’t anything that great. Then I switch it over to a variable voltage battery and it made a huge difference.

The key to getting the most out of an Apex RemPen vape cartridge seems to be running the battery at 4.2 volts. If you run it on a standard pull draw that’s probably battery likely operating around 3.7 volts, it’s not going to perform well. Use something like a Vessel battery or YoCan Uni and you won’t be disappointed.

Recommendations: Put this oil on something standard like CCELL hardware and it should make it taste a little bit better.

Check out our video review below and keep reading for the more in-depth review.

As a complete package, the APEX RemPen is pretty good. It’s not the absolute best cartridge out there, but I would say it lands on the top 1/3 when it comes to quality and strength out of the cartridges that are available.

The strain used in this review is Sundae Drive, most likely based on Sundae Driver. This cartridge is currently available in Colorado.

Another nice thing about APEX RemPen is that it comes in 600mg instead of 500mg but it’s priced the same as 500mg THC carts. Right off the bat that’s a nice increase.

You can still get a good hit out of this as mentioned when we use the right battery. However, by default its just really not that great piece of hardware. If they use a CCELL, SPRK, or maybe a pod system like the Uno or Dart, better results would be had from the same THC oil.

Colorado seems to have a wider variety of hardware types than California and Nevada, who seem to have mostly CCELL as the default.

When you use a variable battery on 4.2 volts, however, you will get a good hit. Still, though, it still not good as you will get on a CCELL even operating on a standard pull draw battery like the Palm or Silo. I do feel like this oil could be even better if they have good hardware. Additionally, the airflow holes are very small on the mouthpiece and it does seem a little bit restricted.

The oil never changed color the entire time. I had the APEX RemPen for 2 months of on and off use before writing this review.

Part of the reason why I didn’t start hitting that much initially as it seems pretty weak. My priority as a reviewer is to get to the best stuff first if I am hitting multiple items, so the APEX RemPen sat for a bit while going through other THC vape carts.

Then I tried it on another battery in the right settings and it seems much better. With no consistency changes with the oil at all, and everything maintained its color to the end, this seems to be a quality made distillate. Doesn’t seem that it has any cutting agents, non-cannabis terpenes or anything like that on this cartridge.

Strength is battery dependent, go with variable voltage for the APEX RemPen

A standard battery would make you think that this cartridge is weak and not strong at all. Put it at the right battery and put it on the right voltage, and now you will have a strong cartridge again.

Definitely in the top 1/3 of carts when it comes to strength when it’s at 4.2V. I’m comparing to other cartridges that I have tried in CA, CO and NV.

It’s not the absolute strongest cartridge and if I’m looking for something that is stronger around the same price, I would probably take an AiroPro over this one. You are getting an extra 100mg with this cartridge but I would just grab and take another cartridge that is slightly better than buying this one.

I mention AiroPro because it was available at the same dispensary I picked up this APEX RemPen cart at. You do need an AiroPro battery or UWOW Storm (don’t use an adapter the magnets line up perfectly already) to vape AiroPro carts though. The Storm is also a decent battery for Apex carts.

Taste is decent, nothing spectacular

Nothing really special on taste, but in a good way. It doesn’t seem like they’re adding any flavors in here and I prefer that rather than adding fake flavors. However, the distillate itself doesn’t taste spectacular. There are better tasting cartridges that are straight distillate. For example, Roots, Cannavative and one that completely blew us away on taste, the AiroPro Live Flower Series.

Comparing CO to CO from the same purchase batch, APEX RemPen was on par taste-wise with Eureka Vapor, but behind Javelina.

APEX RemPen cartridge is pretty efficient, with the right battery

If you are using a standard battery the whole time of this cartridge, you will really think that this is not efficient because you will never get a strong hit out of it even though it is using the oil up to the last drop.

We should note that the intake holes on this are much smaller than there are on most of the batteries.  They’re trying to make it use less oil as it goes. Personally, I think larger intake holes are better and small intake holes are often the reason why you’re not getting a strong hit out of your cartridge. This is the case on the Jackpot Cartridge.

But if you have the right battery on the right voltage, efficiency is pretty good and this oil does really last a long time. It vapes slowly as you would expect from this thick of THC oil.

Number of puffs is good

Value is there but could be better with different hardware

If they give this a better piece of hardware, this will definitely be of better value. You don’t really know the full potential of this oil until you put it in some type of standardized hardware that hits really good.

We already know that this cartridge doesn’t hit very well without the right battery, so that does take it ours from its value. You need to have the proper battery in order to get a better hit. At the price of $40 plus tax, there are other options available that have a better value.

Compared to a lot of other brands though Apex is way better. I would take an APEX RemPen over a Cookies cartridge any day, even though they do use the same CCELL cart hardware Cannavative does. In fact, this in a way proves the APEX RemPen has great oil, just needs better hardware.

Overall, the APEX RemPen vape is good. It hits well with the right battery but seems weak otherwise. It’s nice that they have included and extra 100mg but I rather just have better hardware than have the extra 100mg. I also would like to see this oil in a syringe if they don’t have it already and test it out on a CCELL cartridge.

APEX RemPen cart is an example of a company trying to go unique with the hardware and it’s not working out so well. The piece of hardware doesn’t seem that it would be much cheaper based on the construction of it, which seems like high-quality parts. It just doesn’t hit as hard as CCELL. My recommendation would be to switch this oil over to a CCELL, SPRK or other types of hardware that hits better. Then this will be an overall better cart.

We’d love to hear all about it in the comments below or check out our forum.

KRT Vape Carts Are Fakes : Nothing But Packaging