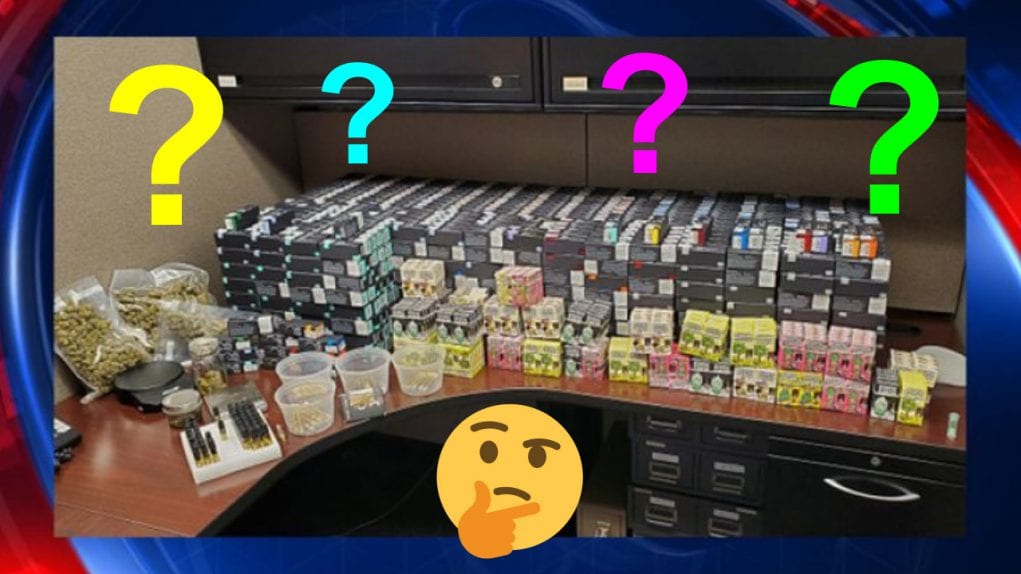 The massive crisis of fake and counterfeit vape cartridges and the associated epidemic of lung illness has swamped the legalized cannabis industry. It’s left the vaping community in a panic, as everybody scrambles to sort through the rumors – least of all helped by some media outlets that don’t report on this stuff accurately.

We’ll try to do our part to help out. Let’s call this…

So far, only about 20% of the United States allows legal cannabis and cannabis extracts for adult recreational purposes. That leaves a lot of people out in the illegal places. We know, if you live where it’s not legal yet, you’re going to want to get your product from somewhere. There’s also the matter of people who medicate for various maladies, and they want to maintain a supply line as well.

We just want to say first off that we’re not out to shame and blame anybody. But we also have a responsibility not to advise people that they’re safe puffing on mystery oil brewed up in somebody’s basement.

To determine the legality of cannabis products in your state and find out how to check the license for any individual business, we put together a full listing of US states with links to every licensing authority we can find. We try to keep it updated as new developments occur.

California is where the majority of fake carts circulate

Something like 90% of all fake cartridges we track down either come from or are sold in California. Let’s take a moment to thoroughly explain California licensing:

The MCSB has an FAQ section on licenses for manufacturers of cannabis products. The license classes are:

Each of these licenses are inclusive for the ones below them in the list. So if you have a Type 7, you are licensed to extract with volatile solvents, extract through cooking oils, infuse oil into edibles, and package and label the product.

As for the BCC licenses, there’s an information section on them. The license types are:

Of course, fake carts are spread throughout the United States, Canada, the UK, and other places as well. But California, being the largest legalized state by population, is positively teeming with them.

We’ll let this YouTuber set you straight on Cali:

They get busted on a regular basis. Just recently in December 2019, Los Angeles police raided multiple shops in L.A. The unlicensed dispensaries were trading in the usual fake vape cartridges, which were confiscated and tested. They found that 75% of the vapes contained undisclosed additives, including the thickening agent vitamin E acetate. Not only that, but THC levels in the confiscated vapes were found to be as low as 18%! That is some serious dilution.

This was months after the first stories of people dying from vaping-related lung injury broke in the mass media, so everybody involved here had no excuse.

There are several fake vape cart brands that saturate the market

While the variety of fake cart brands are nearly infinite (covering them all is the quest of a lifetime), there are several consistent brands that show up month after month. They are sold as empty carts for a few pennies each on international online market sites such as DHGate and Alibaba. Anybody can buy them and fill them with whatever. View our list for top brands of fake cartridges, but note that some of those are counterfeits of legit companies.

There are different kinds of unregulated vape cartridges

We try to differentiate between them, because they all tell you something different:

When you see a fake brand, it is 100% guaranteed to be unregulated. Every puff is a gamble with your life, since these brands prey on the naive and regularly send people to the hospital.

When you see a counterfeit brand, the question is “did you get it from a licensed dispensary?” Or at least, can you verify from the QR code that it was just bought from one? If not, it’s just as bad as a fake brand, see above.

When you see a street brand, that’s a different thing. Street brands do have some quality control… sometimes. We realize not everybody lives in a legal state and everybody likes to think they can trust their plug. Street brands will only pop up in a few local areas, handled by a few people who count on their brand’s reputation. Some even test their product regularly and post results. The problem is that without regulation, you’re still trusting somebody with your life.

Let us be clear: Almost nobody deliberately sets out to poison their customers (barring a few psychos). The process of transforming cannabis flower into vape cartridge oil is hard work, with many tedious steps that make for a temptation to cut corners. Some guy brewing oil in his basement following from a couple YouTube videos is prone to make mistakes. Lord knows, cartridges have tested dirty coming from fully legal, top-name brands.

Marijuana has been used for at least 2500 years of human history. Smoking it has not resulted in one death. Smoking can cause other long-term health problems, and separately cannabis may possibly affect certain individuals negatively in the long-term, but when it comes to vaping lung injuries, it’s squeaky clean.

Your second best safe bet is other concentrates: Shatter, wax, dabs, or edibles. These are harder to fake and you’re more likely to know your source better. We haven’t lost a devoted dabber yet.

People are still dying from it and people are still going to the hospital from it. It’s called VAPI (Vaping-Associated Pulmonary Injury). The Wikipedia page on VAPI is regularly updated. The toll as of last update (January 21, 2020) stands at 60 deaths and 27K cases reported to the CDC.

We see some people in the vaping community asking if the epidemic is over because it’s disappeared from the news. The media has moved on to other stories as they always do, but the problem has not gone away.

THE BUBBLE TEST IS BULLSHIT!

Early on when THC vapes first became a thing, an urban legend quickly spread equating the viscosity of the oil in a cartridge with its quality. We’ve seen every variant, calling for slow-moving bubbles, stationary bubbles, or certain patterns of bubble movement. This means nothing! In fact, the widespread rumor that thicker oil = higher potency is what led to the addition of harmful cut like Honey Cut, which started the whole lung injury epidemic.

This is such a persistent rumor that it’s made its way into licensing literature such as the Ohio Marijuana Card site. Even there, they point out further down that additives are used to thicken the oil, a whole five paragraphs below the claim that the bubble test is “generally effective.”

If you want to test your oil, take it to a licensed laboratory testing facility. That’s it.

Readers: What other questions about fake carts in general do you see over and over?

Help us out by sharing any popular misconceptions you encounter on the subject. You can also add your point of view in the forum.