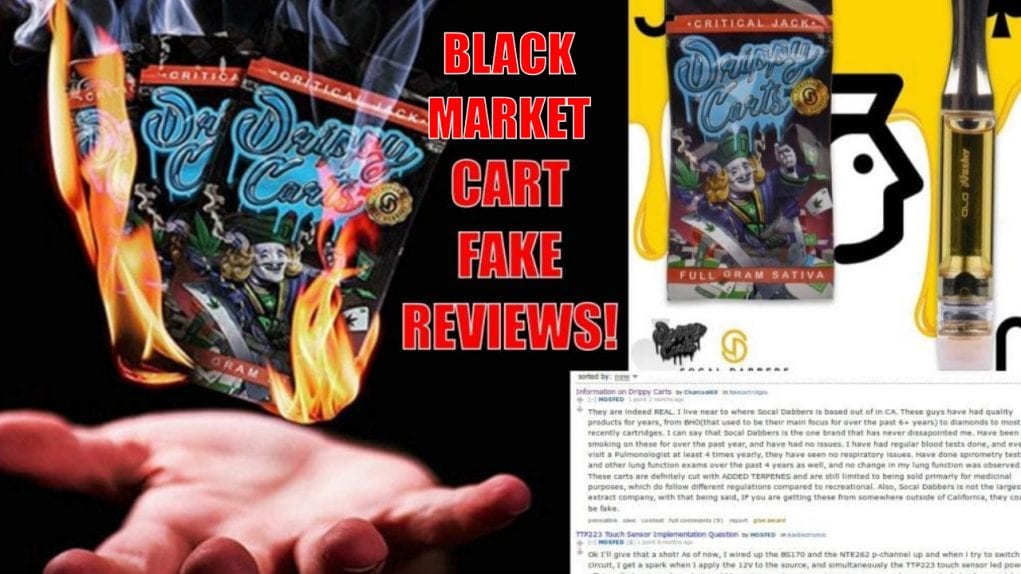 Drippy Carts are a black market brand, untested, unlicensed, unsafe. Taking one look at the packaging will show that they’re every bit as egregiously black market as Dank, Cereal Carts, Bart Carts, and the rest of the black market carts rogue’s gallery. There is, however, some active hustling going on behind this logo, as we will show.

We know this because they boldly say so on their Wix-created home page. Yes, this time we’re dealing with a black market operation that has no qualms about advertising what they’re doing. Everything with them is bold and in your face, daring everyone to call them out on it.

So let’s be sure to do a lot of that.

First, their home page gets right to advertising Sour Patch edibles and Drippy Carts (full gram). Their page also lists a Google maps layout – cleverly labeling it “Orange County” so they avoid giving any specific street address. If you don’t click on it, it looks like they’re showing an address and therefore conclude “must be legit.” They also link to a dead Instagram page, and a dead WeedMaps kiosk (WeedMaps actually kicked them off? Miracles never cease!), but their Facebook is still live.

You will note from their banner that their entire purpose in life is to sell Drippy Carts. They may pretend to be one of those “lifestyle brands,” selling branded hoodies and tees, but that’s all they really show interest in is selling empty carts for distributors to fill and resell.

Wait, it looks like they’re out of stock on their home page – nope, no carts for sale here!

There’s also a special ruse this time which we’ve never seen before. Trying to locate more Drippy Cart retailers, we stumbled upon Jefe Photography. It appears on the front to be a humble freelance photographer. Except, what a funny photography business! The only “works” he shows in his “gallery” are black market THC vape cartridges, the only “customers” he shows under “clients” are all black market or counterfeit THC vape cartridge brands, and so on.

Could this be SoCal Dabbers astroturf-marketing their product?

Behold this Reddit thread, with the usual poster asking 5 months ago if the Drippy Carts product they found was fake. Several posters answer in the affirmative – BUT one poster name of u/MOSFED leaps to Drippy Carts’ defense. He says they’re “indeed REAL,” and the maker has “quality products for years,” and even goes on to claim he gets his lungs tested at a Pulmonologist – quote – “at least 4 times yearly” to verify he has no health concerns.

Doesn’t it seem peculiar to make that claim? Why would anyone get their lungs tested FOUR times a year out of the blue?

Well, look at MOSFED’s account. There is activity on another unrelated thread to appear legit, then the heartfelt defense of SoCal Dabbers, then nothing.

Doesn’t look suspicious at all, does it? We’re supposed to be too stupid to see through it.

This casts the positive reviews of Drippy Carts and SoCal Dabbers on Reddit in a suspicious light. Like reviews one two three all from u/cholo_stoner. Or this one from u/killedforapepsi who also plugs Dank carts.

What we see here is a pattern of unusually invested accounts which collectively demonstrate (1) awareness of the lung illness crisis, and (2) deliberate deception to trick people into thinking they’re safe. As several on Reddit itself point out, the price range of less than $40 per full gram means that it is impossible for these cartridges to contain uncut oil. Even u/MOSFED backpedals by saying “maybe they have a lot of terpenes” in anticipation of further questioning.

As one Instagram poster puts it, “what about lab testings?” Of course, we’ve seen Photoshopped lab results posted before when covering other black market brands, so that would be small assurance here.

SoCal Dabbers’ Facebook page shows numerous posts complaining of being kicked off Instagram. The social media network has recently cracked down on the THC vape marketers infiltrating their platform. Yet SoCal Dabbers response is simply to create a new account: they’re there now. So somebody’s not getting the message.

Unlicensed, unregulated brands like Drippy Carts may contain anything

There is a deadly epidemic of lung illness tied to black market cart usage. Vaping-associated pulmonary injury has so far claimed 55 lives and hospitalized more than 2.5K users. Unregulated vape carts could contain heavy metals like lead, pesticides, cut such as Honey Cut, or simply bunk. You might hope they could be fire if you’re lucky. But a lot of people in the hospital right now weren’t lucky.

SoCal Dabbers are the kinds of black market distributors we really look forward to exposing, because along with their illegal activity, they are so dismissive of the public, so arrogantly insulting of our intelligence. In other cases, we may give black market brands the benefit of the doubt when people are hospitalized with vitamin E acetate in their lungs. Maybe they didn’t know better, maybe it was a careless accident. With an outfit like So Cal Dabbers, going to such lengths to elaborate the ruse and hide what they’re doing, you know it’s no accident when it happens! The people behind this brand name care nothing about your life.