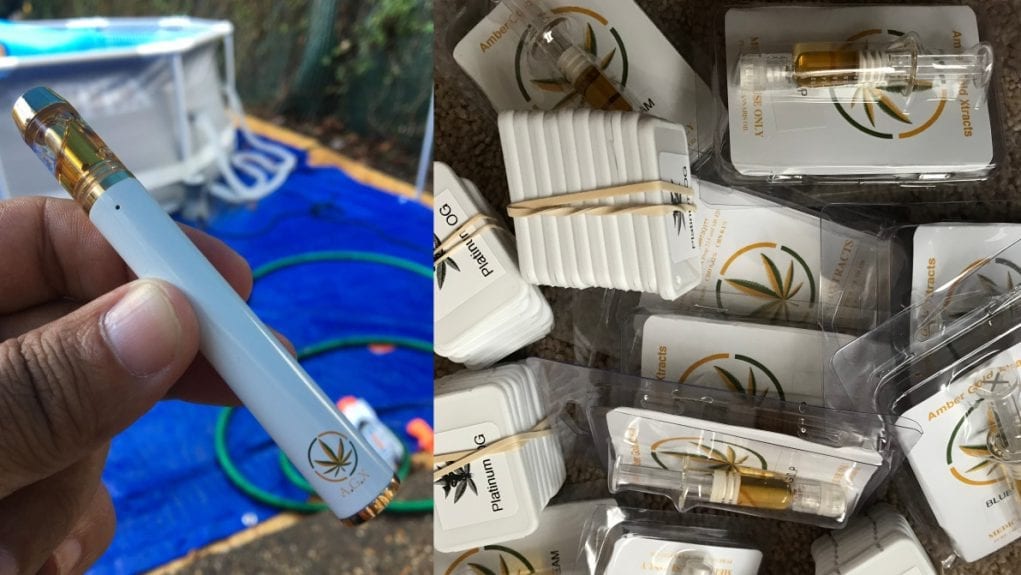 Every day in the business of tracking down fake, street, and black market brands, we find a new deceptive trick. The black market is responding to the public concern by increasingly camouflaging box product as legitimate brands. Such is the case with Amber Gold Xtracts, a THC vape cartridge brand with no company behind it.

Amber Gold Xtracts are out there, but not common

We only find one report on Reddit’s oilpen channels about this product, but it begins a thread we’ll pursue later. This report (with a now deleted video, just our luck) mentions a legit-looking package but “can’t get that QR code to scan.”

The hashtag #ambergoldxtracts leads to several channels promoting the brand and some other THC 710 packaging. Some channel patrons were generous enough to provide us with glimpses of this QR code:

Both of these are, indeed, too muddled for our own QR code scanners to connect. For anybody wondering, you can easily find QR codes by simply Googling them, and then if you have access to another screen, you should have no problem scanning a QR code off, say, a laptop onto a phone.

But these don’t pick up for anything we’re using, and then we noticed something. Rotating one of the images and blowing up the QR code areas, we get this result which we can still make out even though the images get a bit blurry in one sample:

Now, why would the QR code be the same on all three boxes? For three different strains, two made in February 2019 and one in March 2019? You can see the pattern doesn’t change between all three codes. By everything we know about how QR codes on vape carts are supposed to work, they should be individual down to the cartridge. That way you can check to see if they’re factory-sealed originals. That’s how Rove does it, for instance.

Note also, that the code and other details are on a sticker. We haven’t seen mass-produced street carts with their own stickers before. Again, like with Muha Meds, that’s going to a whole lot of trouble to appear legit when it would be less trouble and expense to just go legit!

Apparently somebody flagged an Amber Gold Xtracts post with that hashtag and Instagram removed it? User account “elpote710” reports so, telling off whoever did that along with some vulgar language. The same guy also posts this jaw-dropping rant:

Lots to unpack here. He’s calling out other fake brands. Then posting a video highlight under “AmberGold” there showing rows of mass-produced boxes from somebody’s home.

And hawking other known fake brands on the same page. We meet again, DankWoods! For this guy to do all that is just hypocrisy on a whole new level.

Then several of the brands in that list are real companies, just frequently counterfeit ones, but he calls all those not safe. Finally, ah, we assure you all that there are some terpenes in cannabis alright. This guy seems suspicious about terpenes. In fact, there’s plenty of the same terpenes in your spice rack and a few kicking around your produce, and for all we know somebody could be sprinkling some basil in there. So half-point awarded, maybe, but the problem with the lung damage epidemic isn’t coming from terpenes, it’s the vitamin E acetate in the cut.

Anyway, ElPote is far from the only Instagrammer posting videos of cartridges ready to sell. There’s also “THC.farmacy,” with a KFC ripoff for a logo. In case you were discouraged by the usual “nothing for sale” disclaimer that all weed-stagrammers put on their profile, here’s this:

Hey, if these are the closest we can get to spokespeople for this supposed brand with stickers and QR codes on it, then we’re just quoting them!

Here’s this user’s profile, giving us a glimpse into the rarely-encountered Pinterest side of THC vape culture.

We also find it on black market sites like these:

Thanks, you have Stiiizy counterfeits, and they’re “compatible with Juul pods,” like Juul didn’t have enough problems already!

Locations we’ve seen reported so far include Pomona, California, and Philly / Pennsylvania, between the several pages and social media accounts.

Well, several things we never did find for Amber Gold Xtracts is a company, a license, a registration, or a licensed dispensary selling same. All that, after trying to scan these QR codes. It’s as if this brand was nothing but… fool’s gold?

Readers, we turn the floor over to you. Wanted: One clear QR scan of this code! Notify us in the forum.