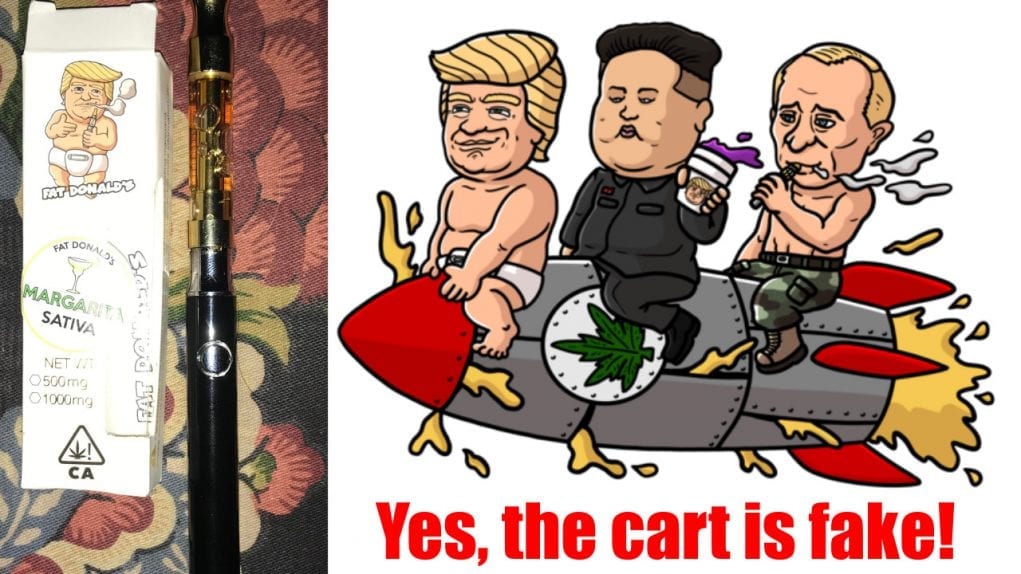 Sometimes a meme and the black market come together in just the right way. So today, we will state the blindingly obvious and tell you that Fat Donald’s is not a licensed or regulated brand of THC vape cartridge. But we have to give it credit anyway for being a fun subject.

Special notice: The subject matter depicts a current US politician. We here at DabConnection disavow all political opinions and don’t care about yours. This is a story about a THC vape cartridge being sold, so it’s in our jurisdiction, regardless of who or what it depicts.

UPDATE: See add-on near the bottom, where we encounter exactly the same story with the brand “Jeff’s Sessions.”

The “brand” showed up as far back as a year ago. Their website offers only clothing and entices you to visit their social media channels “for exclusive deals we can’t show anywhere else.” Note the title on their website still says “Fat Donald Vapes.” Their Instagram hints at a bit more of the story, showing a bevy of models not only wearing the apparel, but all puffing vapor by coincidence!

Their store also has accessories like this beach pillow. 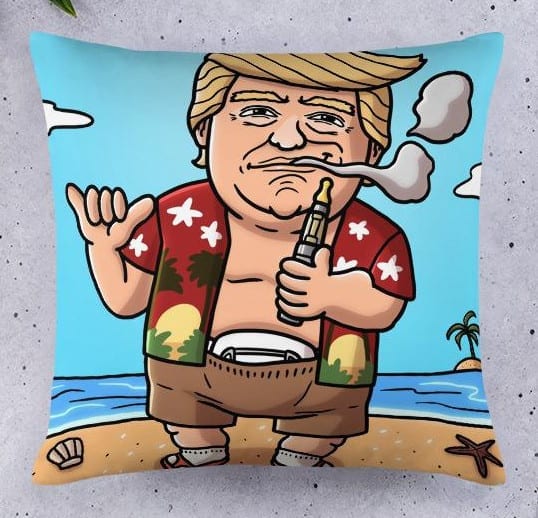 “Fat Donald” is a caricature of current US president Donald J. Trump. On cart packaging, he is depicted as a baby in a diaper puffing a vape. On cartridges, the same baby caricature is also engraved on the metal tip. 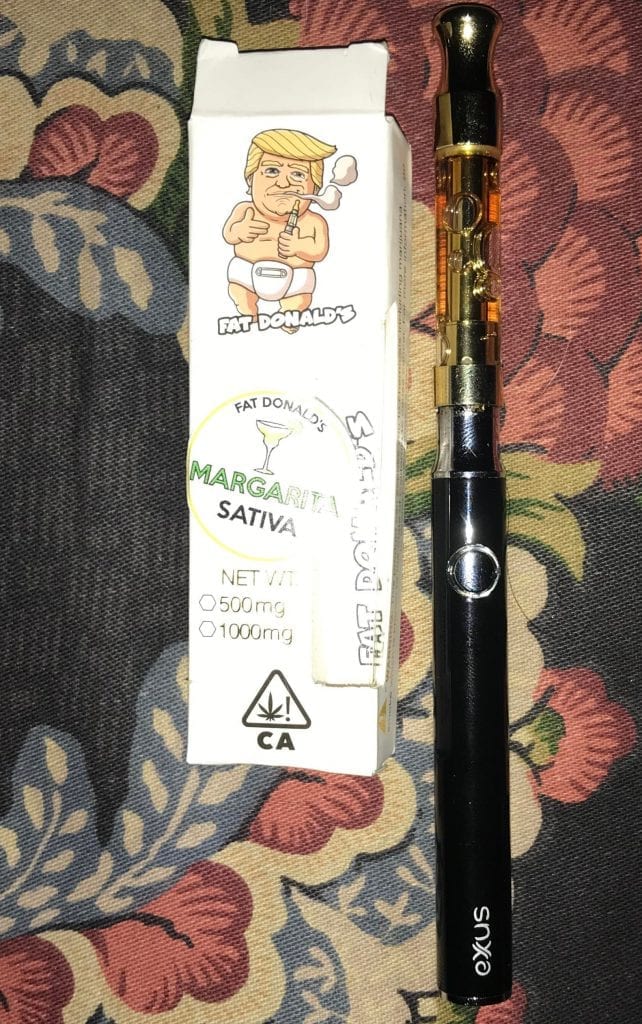 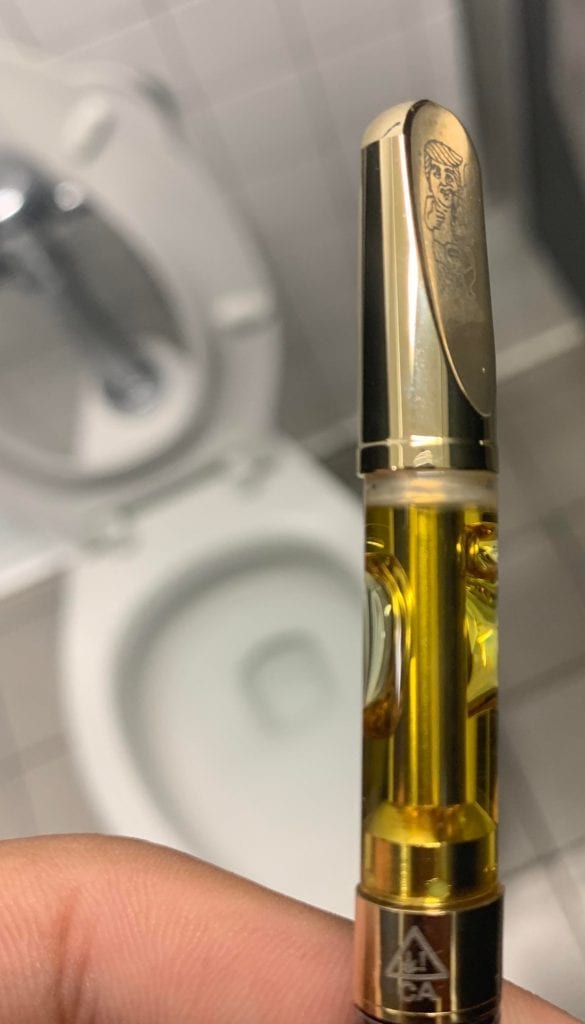 Needless to say, there are no BCC / CDPH licenses registered under such a name. We don’t anticipate this street brand will be getting one any time soon.

Fat Donald’s packaging is not compliant – but not for the reasons you think!

In light of the same arguments we make for fake brands like Runtz, one might think that copyright concerns would be applied to images of the US president. But in fact, there’s a bit of constitutional law that makes this allowable! “A government work is generally not subject to copyright in the U.S.” You can print the US flag or US seal on any old merchandise you want, which by extension covers public figures holding office.

In addition, the cartoon counts as a political satire, protected under the First Amendment. In this way, products can be sold depicting the president, which you can find for any administration. Disclaimer: We are only showing these images to cement our point.

No, the reason this packaging is non-compliant is because it contains a cartoon! The California Department of Public Health specifically forbids cartoons on vape cart packaging.

Fat Donald’s may hang around for awhile

This being an election year and all, the lifestyle / clothing brand obviously has a market.

There is, however, irony in the execution. The Fat Donald package depicts a cocktail glass since the flavor is “margarita.” Donald Trump famously claims to be a teetotaler for personal reasons. On the other hand, Trump Industries did once market a vodka label.

The “Fat Donald” character is also shown in the clothing brand’s logo riding a rocket branded with a pot leaf, accompanied by caricatures of North Korean leader Kim Jong-un and Russian president Vladimir Putin. Cannabis has not been legalized in Russia, and its legal status is debatable in North Korea. President Donald Trump has not come out in full force either for or against cannabis legalization.

So whatever political statement this is trying to make, it’s not a very consistent one regarding cannabis policy. More likely, it is meant as a remark upon the association between these three world leaders.

Political satire on drug paraphernalia is much older than you think

This isn’t any kind of original statement. It carries on a long tradition of drug culture existing, by necessity, within underground culture and hence ripe for all kinds of subversive political statements. A little history gallery: 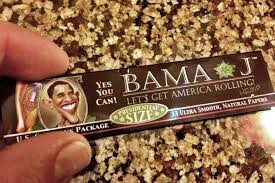 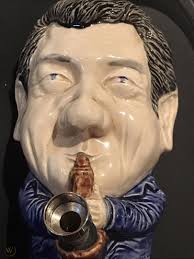 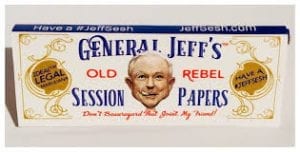 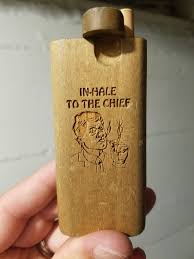 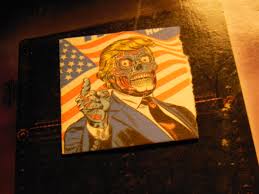 Jeff Sessions is the former Alabama Senator and former Attorney General under president Trump, before he resigned in 2018. He is a frequent target of derision in cannabis culture due to his hard-line stance on cannabis. We’ve actually covered him before when he spoke out against the Cannabis Cup. So it comes as no surprise when we ran across a brand similar to Fat Donald’s, called Jeff’s Sessions. Note that Sessions is depicted resembling a Keebler brand cookie elf, a comparison made frequently by his political detractors. 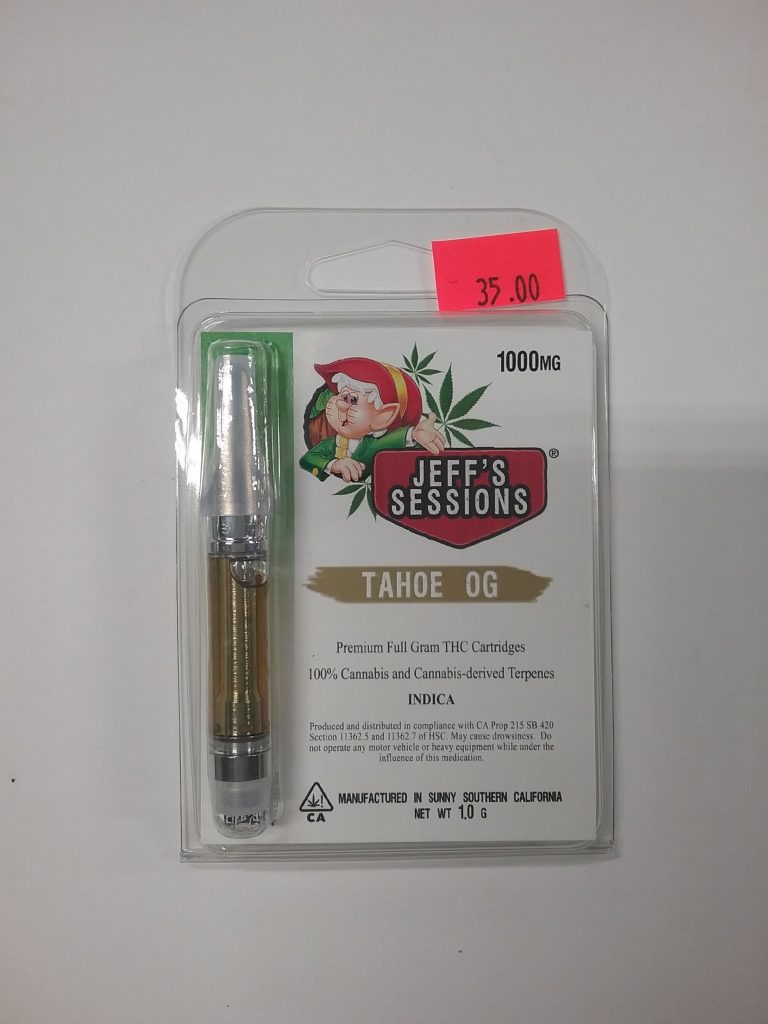 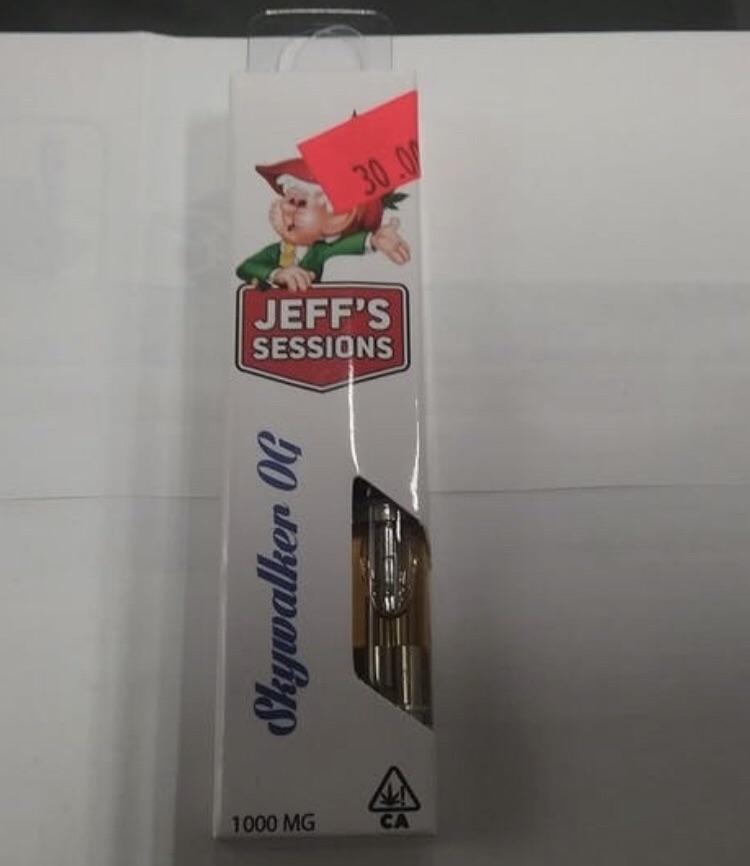 Users reported encountering the brand here and here. These are from a year ago and ten months ago as of this writing (June 2020). Since then Sessions stepped down from his Attorney General position and has expressed that he will re-run for his old senate seat in the 2020 primary. We do find some tell-tale remains of the Jeff’s Sessions’ brand here and there, but it seems to have panned out long ago, probably following his resignation as Attorney General.

If you’re all wondering “What took so long to post this one?” We have a backlog! We get reports of dozens and dozens of fake vape carts every single week. Researching at our fastest, we can confirm and bring you the whole story of between one and three carts per week. This has been going on since vapes were a thing, so do the math. We have a lifetime’s work digging out from this list.

In any case, brands like Fat Donald’s and Jeff’s Sessions are less of a concern, because they are really blatantly faked and the point is to express a political opinion rather than fool people into thinking they’re a real brand.

We run across these from time to time, so we’ll just collect a little gallery here:

“Jimmy Cart” – Rather dippy attempt at humor here, as Jimmy Carter has become a respected statesman among ex-presidents with his work in Habitat for Humanity. Now add to that: Jimmy Carter’s single term in office ended forty years ago as of this writing (1980, when Ronald Reagan was sworn in) and while he was in office he never was noted for his stance on cannabis one way or the other, so this also misses the mark on relevancy. Most people of vaping age won’t even know who this is. 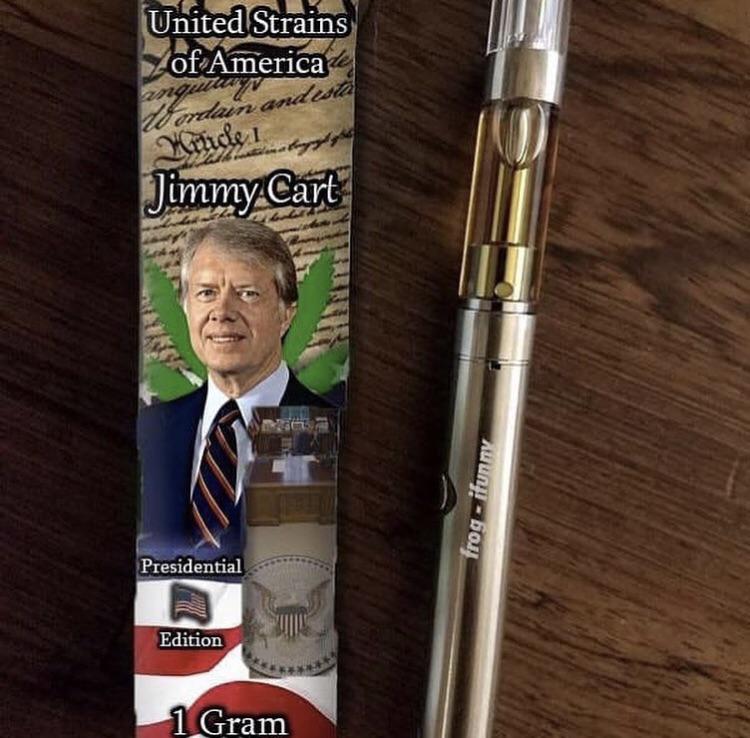 “Kim Jong Juul” – A really lame pun. The North Korean leader is an international target of derision, however, so it’s moderately in step with the times. 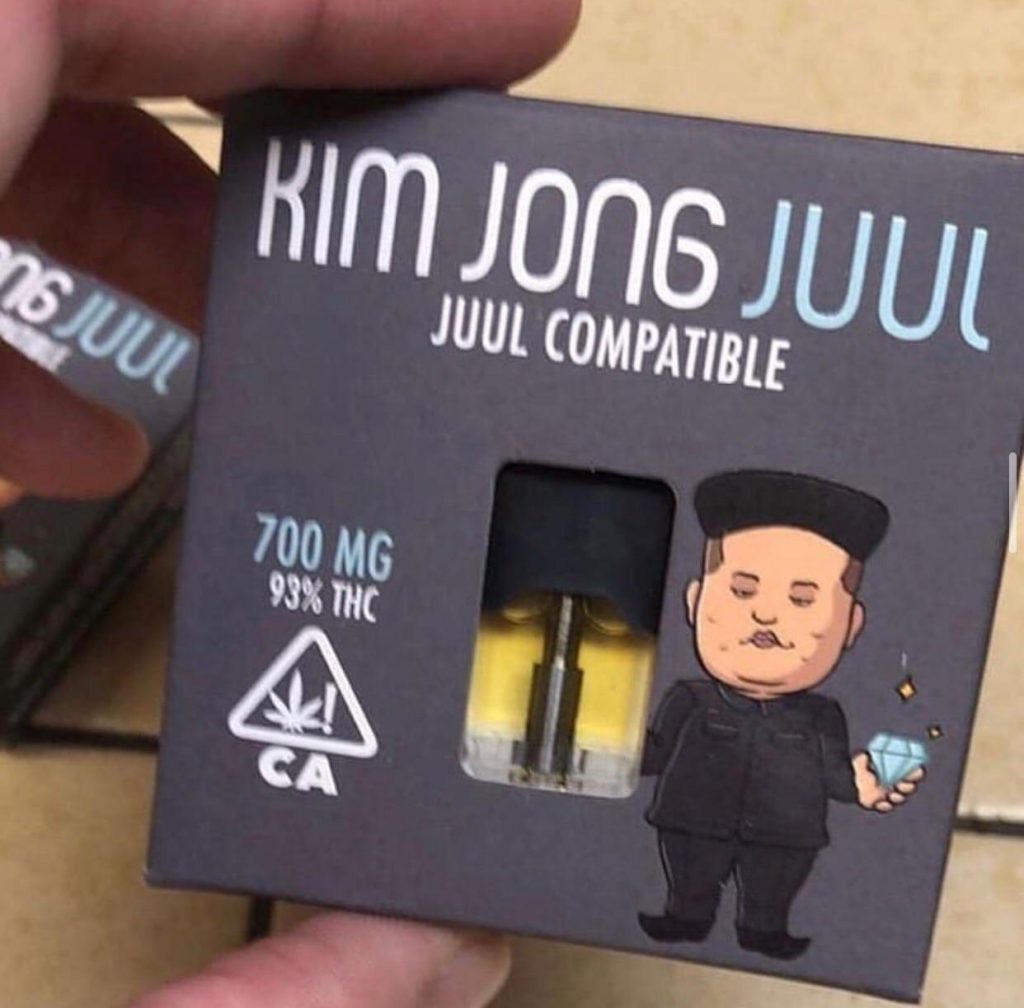 “Sleepy Joe” – Rival Donald Trump’s nickname for successor Joe Biden. Produced during the 2020 election and the aftermath of same. This one is very on-point for political satire, and the nickname even aligns with the effects of Indica, so points for wit here. It’s also yet another fake Muha Meds.

Unlicensed, unregulated brands like Fat Donald’s may contain anything

There is a deadly epidemic of lung illness tied to black market cart usage, no matter how funny the cartoons on the packages are. Vaping-associated pulmonary injury has so far claimed 64 lives and hospitalized more than 2.7K users. Unregulated vape carts could contain heavy metals like lead, pesticides, cut such as Honey Cut, or simply bunk. They could also be fire if you’re lucky. But a lot of people in the hospital right now weren’t lucky.

Let’s try to keep a sense of humor about this, regardless of our opinions. We welcome your opportunity to show us how responsible and enlightened people within cannabis culture behave, here in the comments or in our forum.