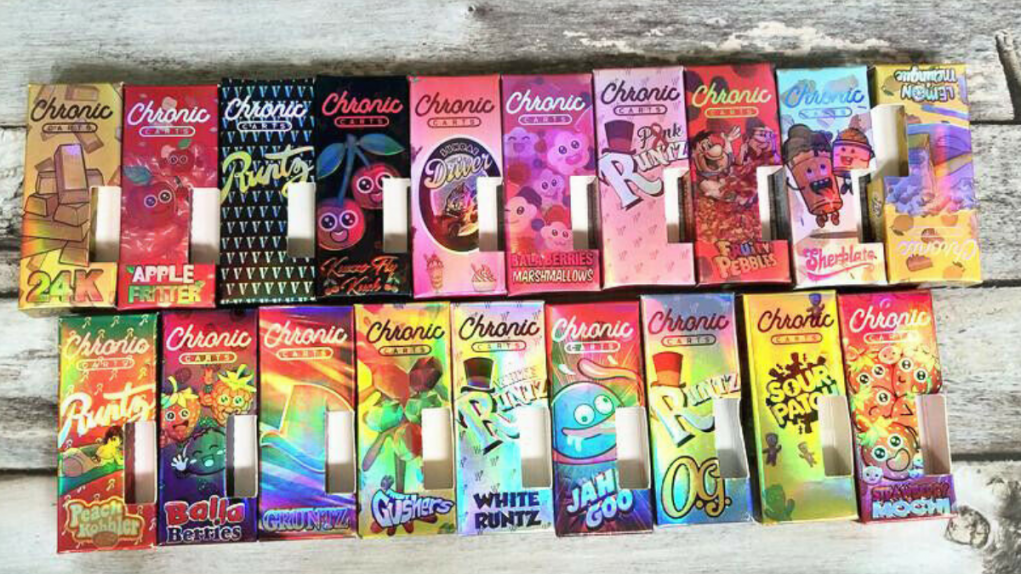 In researching fake vape cart brands and counterfeit knock-offs of real cart brands, we often find ourselves visiting some very weird corners of cannabis culture. But the Runtz story, without a doubt, is one of the most confusing rabbit holes we’ve ever dived into. We could fill a documentary just with a Runtz case study.

Let’s get right to the first point:

UPDATE December 2020: A legit Runtz brand now exists, registered by Cookies LLC. It is not to be confused with the long-standing fakes we post about here.

Runtz vape carts are from a 100% fake brand

There is no controlling or regulating company we can find. Not a dispensary. Not even one of those lifestyle brands selling Tshirts. The entire brand is conjured out of thin air. The packaging is for sale anywhere and everywhere: 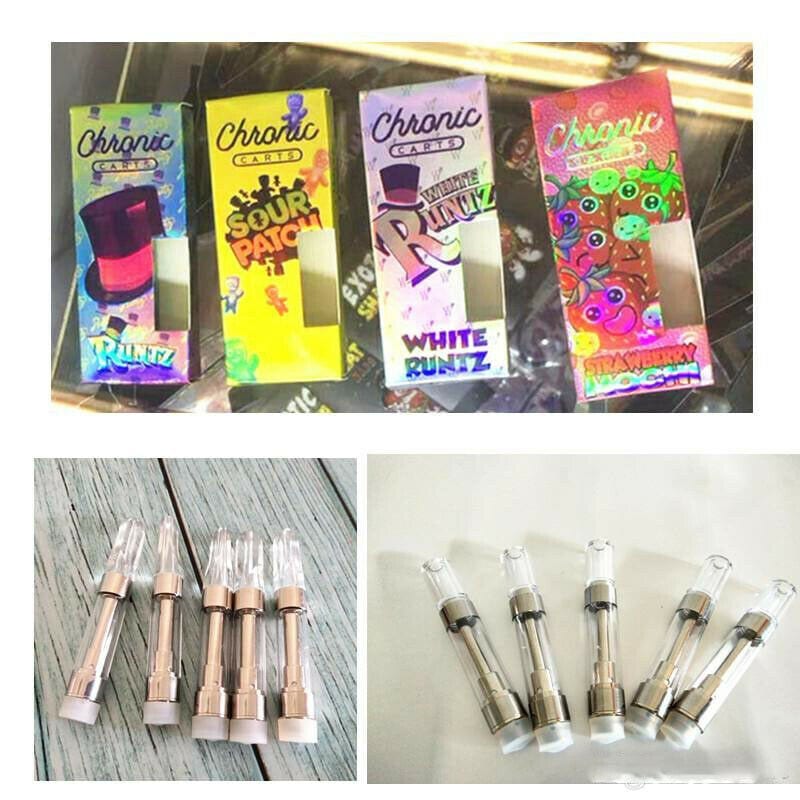 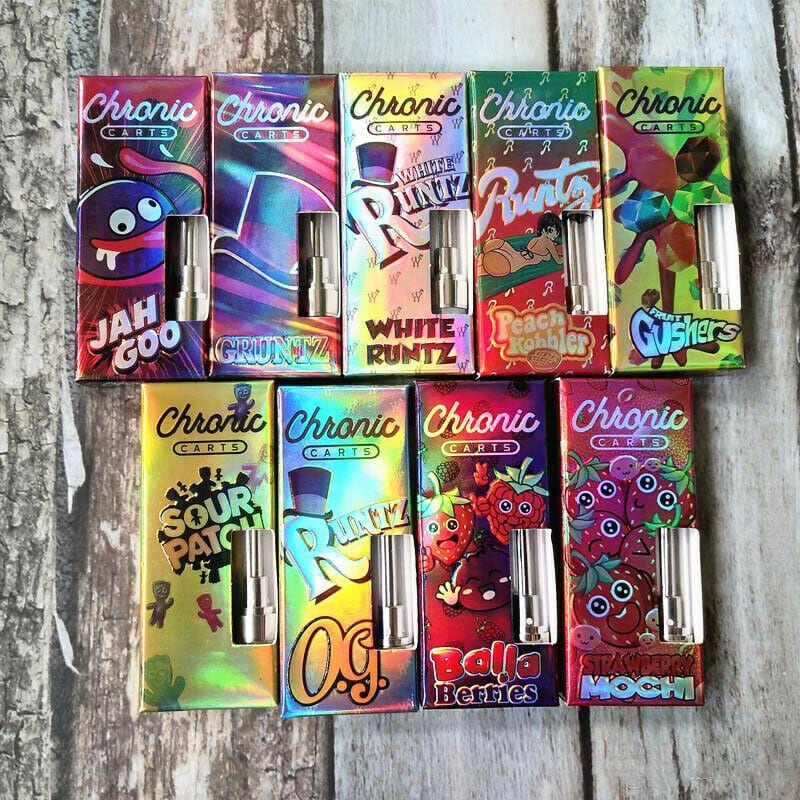 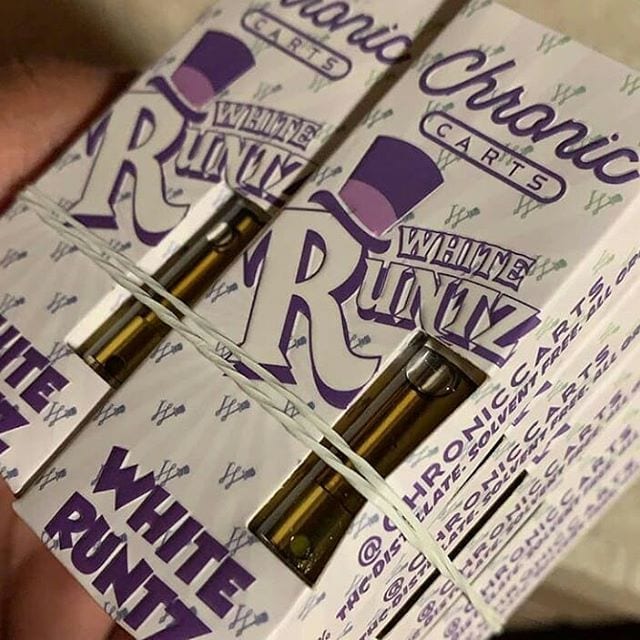 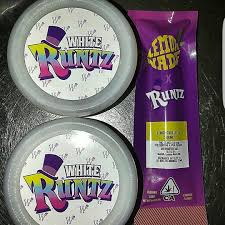 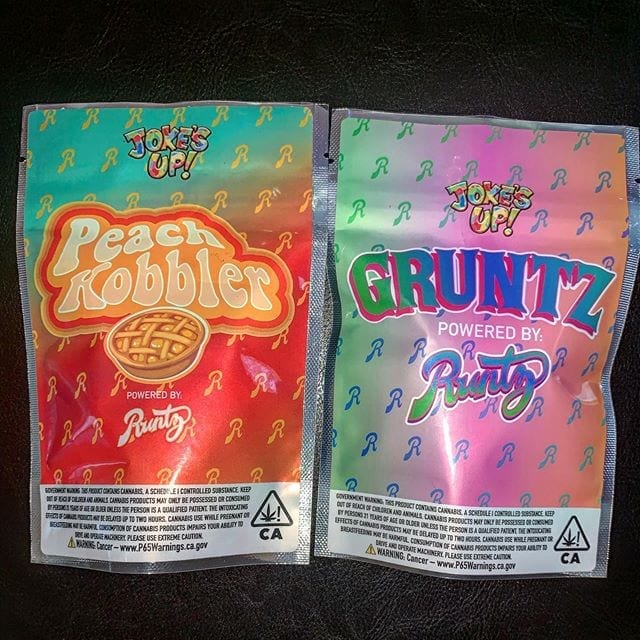 Notice that the Runtz cart packaging often crosses over with other fake or ripped-off brands. We’ve seen mutations of “Chronic” and “Gruntz,” but more than that, Runtz packages tend to pop up in the same page with other fake / rip-off brands we’ve covered before: Jungle Carts, Dank, and Cookies. Anything goes, it seems.

The “Gruntz” “brand” seems to be taking off as a spin-off now: 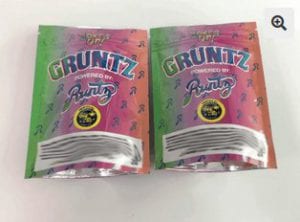 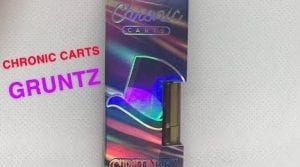 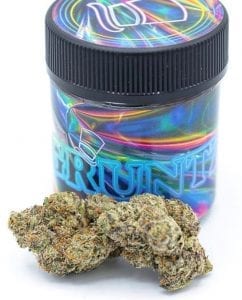 There’s also lots of flower bag packaging and even canisters with the Runtz brand: 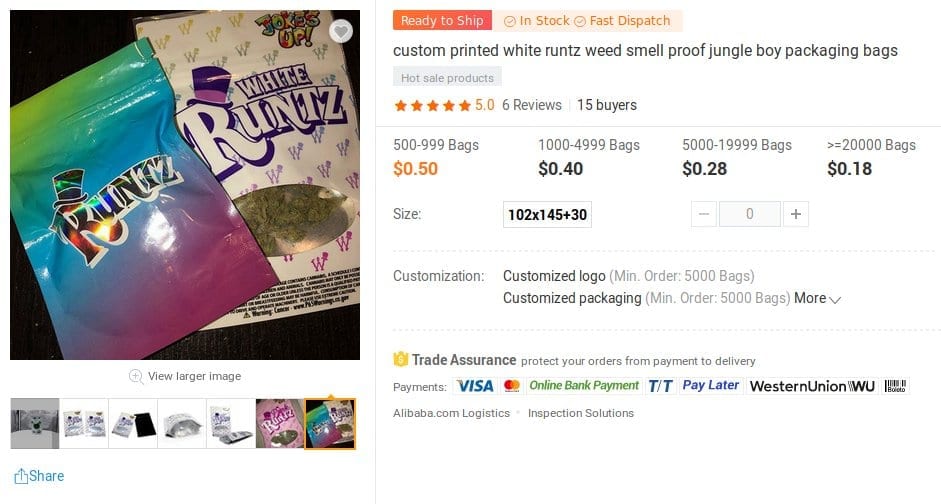 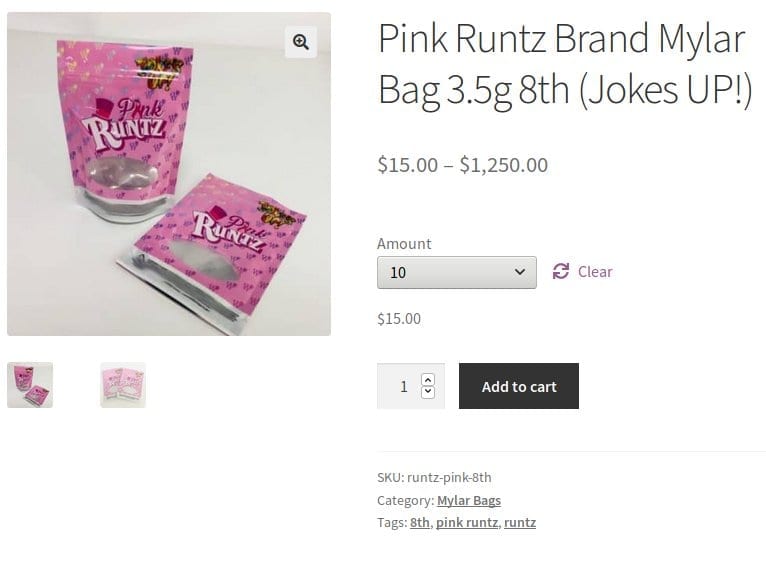 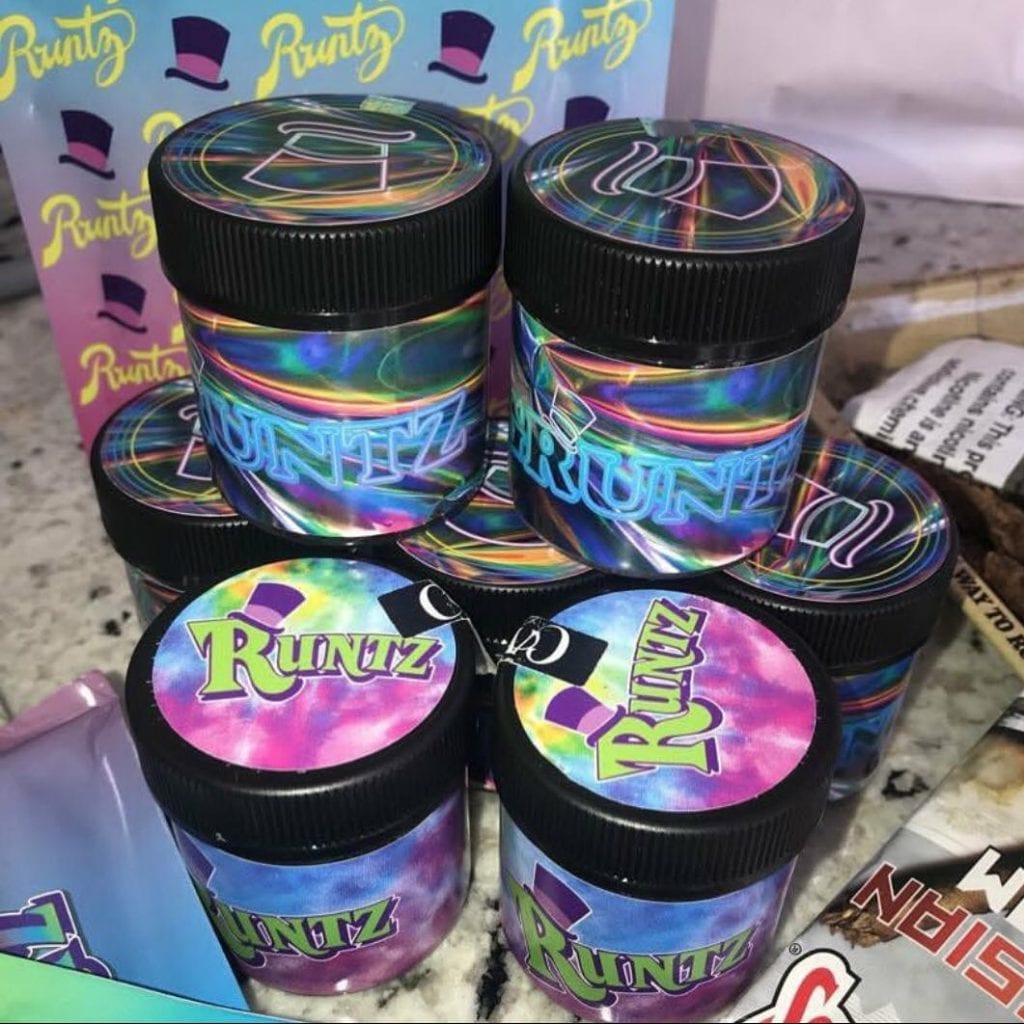 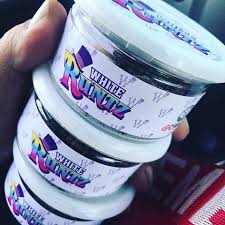 What is White Runtz strain?

To this date, we have no confirmation of any strain called “white Runtz,” “pink Runtz,” or any other color or variety of Runtz. Runtz itself is alleged to be a strain, but even that seems to be poorly sourced. For “white Runtz,” there is literally one paragraph on WeedMaps and a couple reviews which are themselves ALSO showing this fake black market packaging. If you go to any source and they show you a picture of packaging like anything you see here, it’s bogus!

Is Runtz a real strain?

Since we posted this, a new brand of cartridge has launched called “Runtz,” by Cookies LTD. We have it on utterly sworn testimony that a strain called Runtz exists out there, but this may have come about after the fact. You have to take into account that “Runtz” for a while there in 2019 was the most hyped term on the Internet. It has now been claimed by an actual company in the spirit of commerce.

The official name “Runts” is a fruit candy brand owned by Nestlé. Note the ‘s’ in the spelling. The Willy Wonka brands of candy were also licensed by Nestlé, directly from British author Roald Dahl, of Charlie and the Chocolate Factory fame. Here is an example product from the real life candy company:

In the Runtz packaging, you can see the elements of the Wonka design with the whimsical font and the hat made famous by the late Gene Wilder’s character. Indeed, the Wonka candy line also runs brands like Nerds. Are there Nerds carts too? 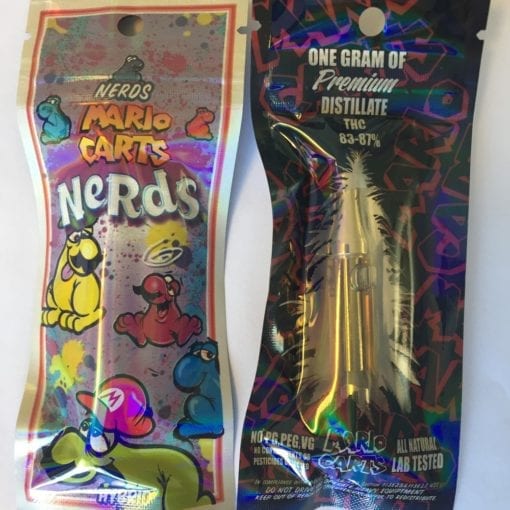 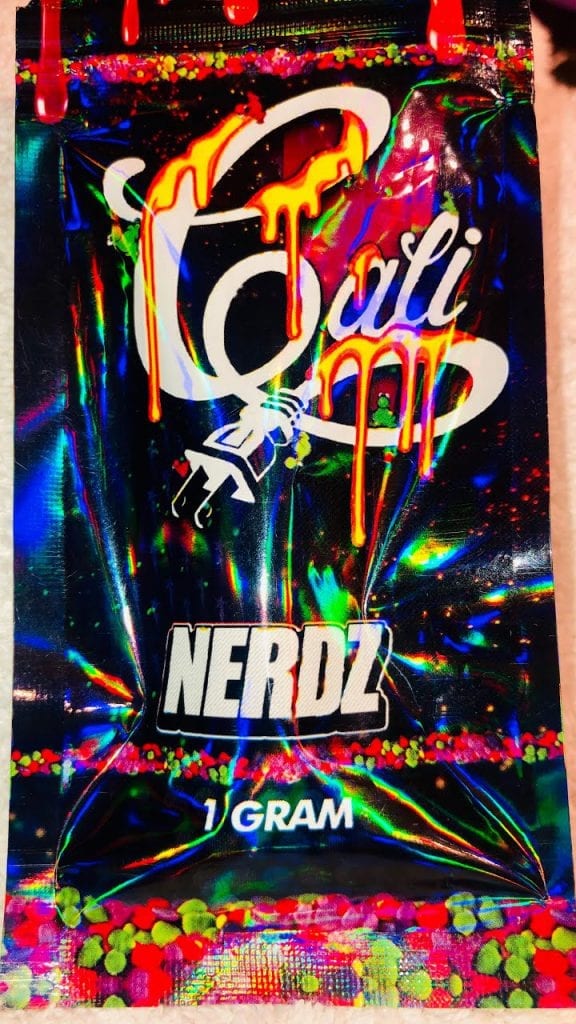 You bet your sweet bippy! In fact there’s a whole Wonka cart thing out there too: 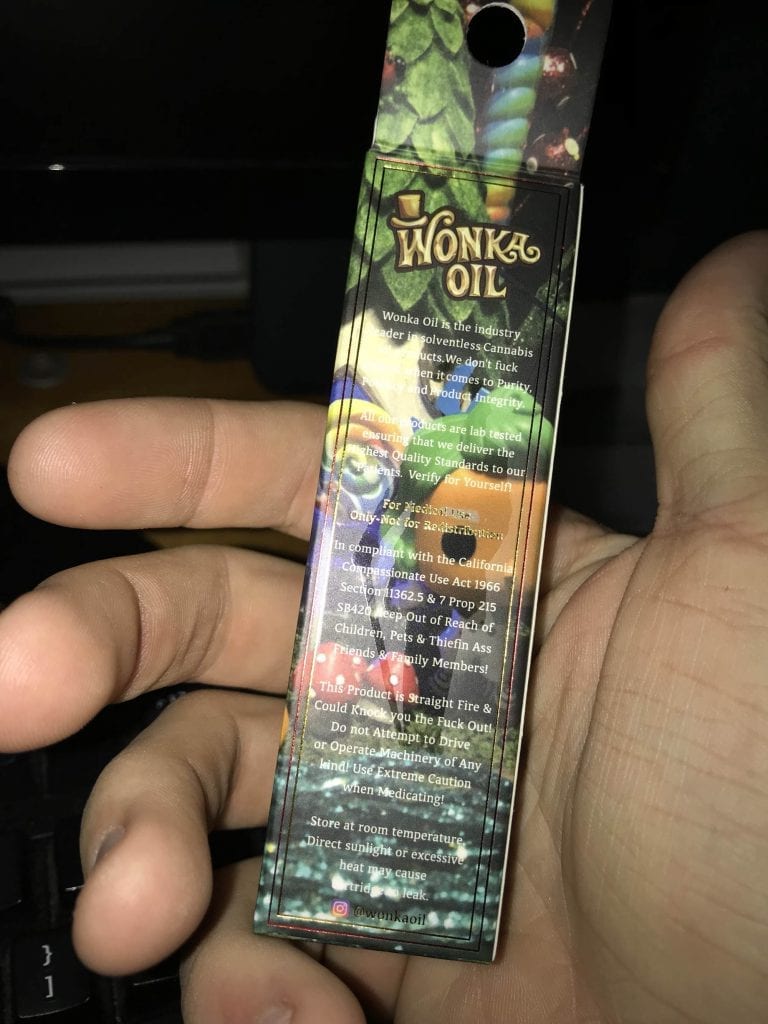 Still going with the same hat. Seriously, guys, what did Gene Wilder do to you?

Obviously, there is no way that a commercial company could get away with this without Nestlé suing them into next century.

The fake calling out the fake!

We found a page calling out a fake Runtz brand. They claim to speak for the “real” Runtz brand. It even says “we know the owner and creator of the Runtz brand.” They link to an Instagram page for “@runntz,” purported to be the authentic source of Runtz brand packaging. This is what we found: 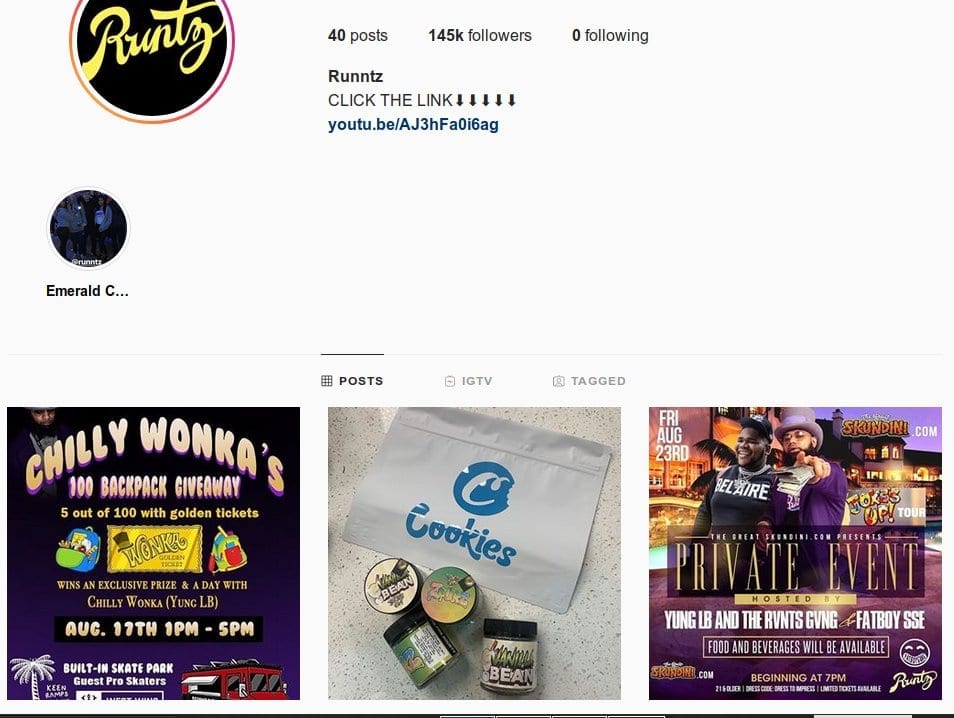 But wait, there’s a YouTube link and an Instagram image that shows “Yung LB and the RVNTS GVNG.” It also has the “Joke’s Up” logo even though the nutter we mentioned earlier savaged “Joke’s Up” for being the fake and then linked to this page as the real McCoy. Where does the YouTube link go? Well… 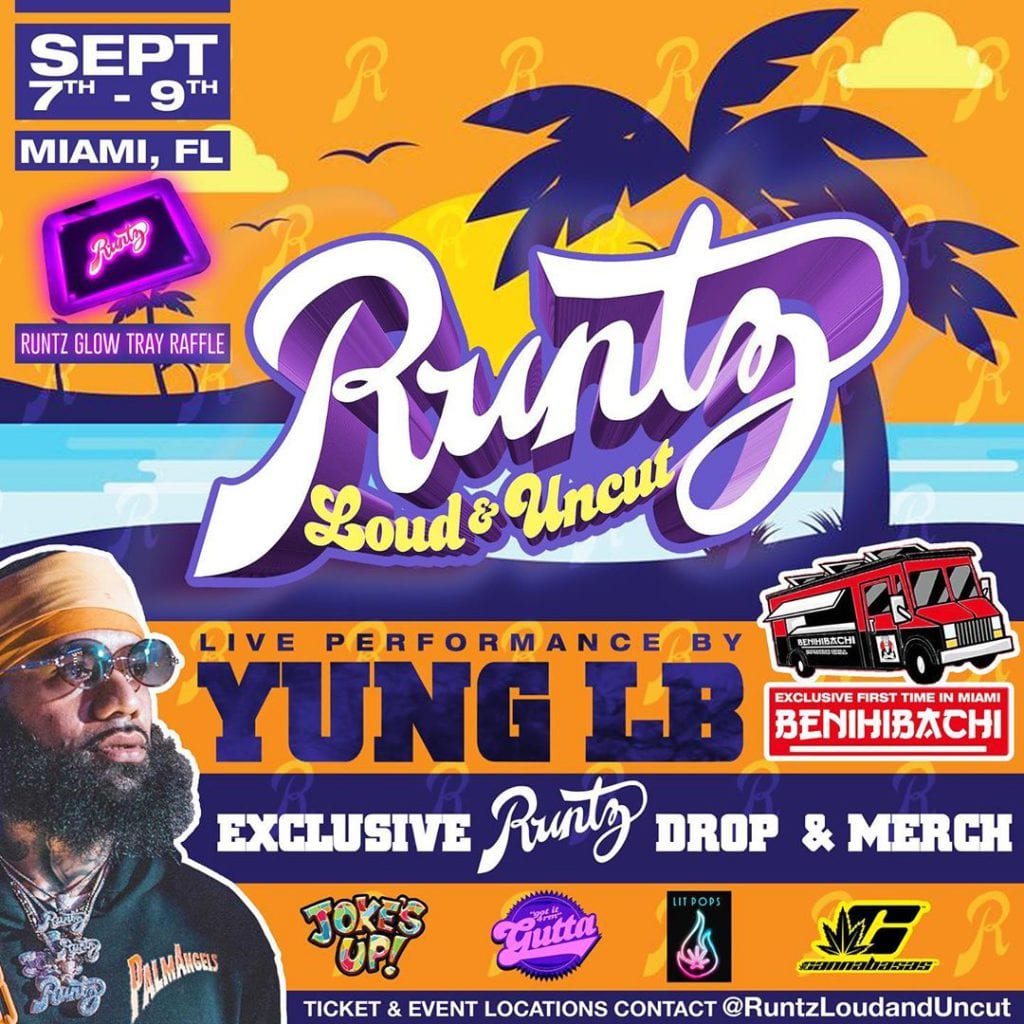 It links to a channel called “Runtz Media” with a whole three videos up. Two of them are “official” music videos for Runtz-themed hip-hop songs and one guest vocal for something unrelated. One of the Runtz songs is titled “Runtz Yo Life Up.” While this flyer clearly proclaims that you can buy tickets “@RuntzLoudandUncut,” there is no such account at any social media platform anywhere, writing at this time only two weeks until the proposed event date on that flyer.

We’re getting suspicious of this whole hip-hop artist’s career. So we searched around and found a hashtag #RuntzYoLifeUp, like the song title, but going to an entirely separate social media account: 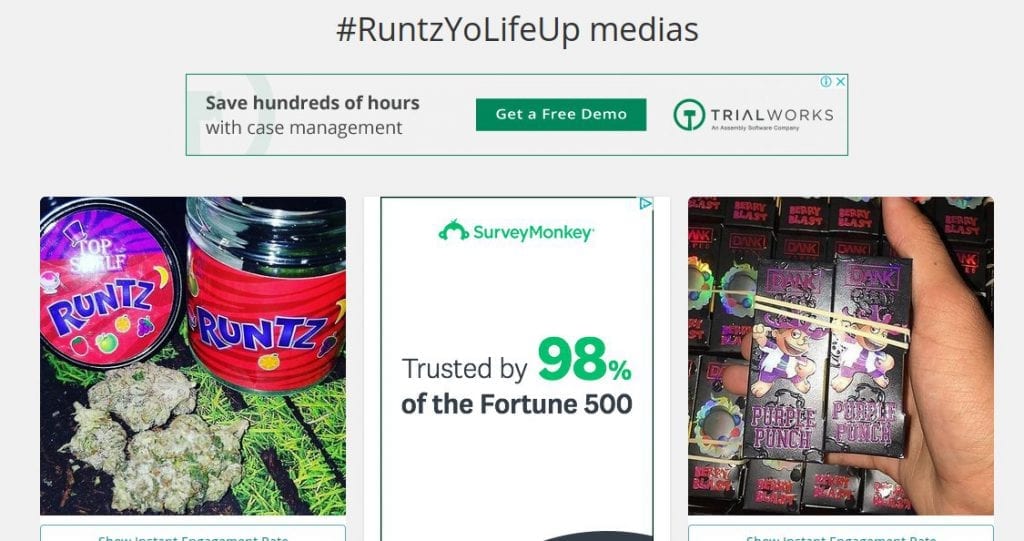 We’re back to Danks again. The rabbit hole never ends, folks. At this point, it would take David Lynch to make sense of the narrative.

“Runtz” was originally alleged to be a cannabis strain

Runtz is the alleged name of a hybrid bred from “Gelato” and “Zkittlez.” Fake vape cart packaging tends to latch onto these names and slap them onto every cart and label, even if it makes no sense. There’s even just a #runtz hashtag on Twitter, popping up on the kinds of posts that spin the hashtags for every random fake vape cart brand.

So that tells us something about what’s going on. What is happening is a counterfeit “brand” comes out, then other counterfeiters copy that, and it just goes around.

There’s just one thing left we’d like to ask…

Does anybody actually own the copyright to the Runtz T shirts, at least? 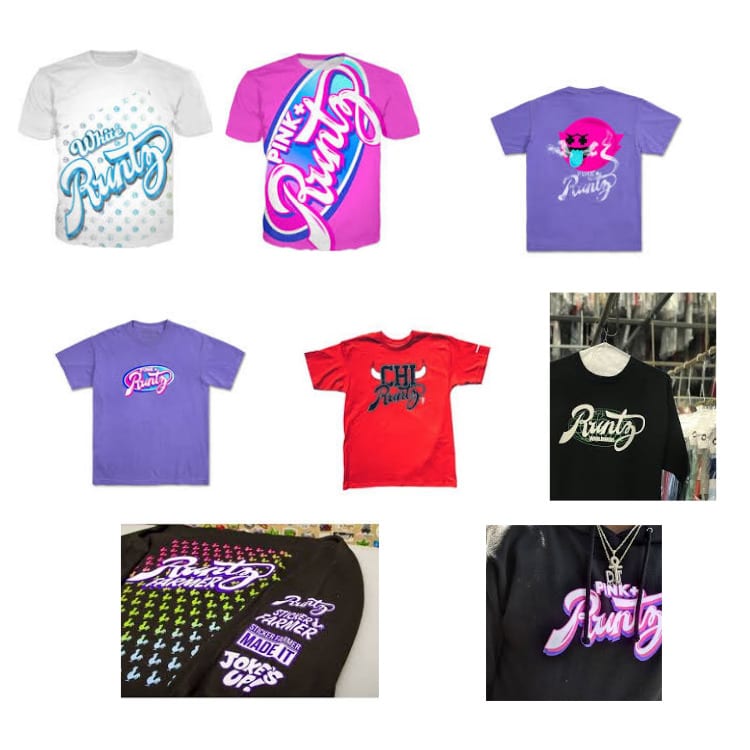 Because we found a Runtz.com, an Etsy store, and dozens more outlets for random Runtz-branded merchandise and none of them seem to be the definitive owners of the brand either.

Runtz is now a registered trademark brand – note the lack of Willy Wonka copyright infringement. Note also that not until November of 2020 was the status of the original patent application changed to “NON-FINAL OFFICE ACTION ISSUED,” which means it’s still not final and has until May of 2021 to file the next step. However, given that they’re launching actual products with the trademarked name from actual dispensaries now, that’s a good enough trademark for us. Note that the other Runtz products we cover here (all the carts) are still not legit, as they came from other sources.

The Runtz trademark owner is “Cookies Creative Consulting & Promotions, LLC,” the same outfit behind the Cookies dispensary, strain, and product line. This company has a record of being extremely casual (to put it as nicely as I possibly can) when it comes to tending to the bylaws of business, so it comes as no surprise that “clarification” is needed. Welcome to the mystery world of Runtz, USTPO!

Have you encountered fake Runtz products out there in the wild? What else is out there? Anybody from Gene Wilders’ estate or Nestlé care to weigh in?