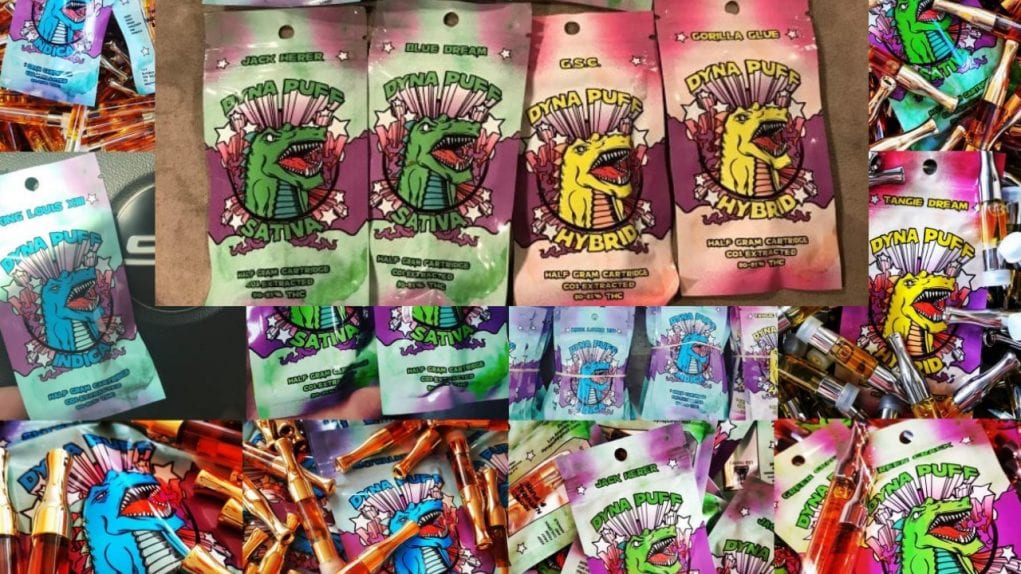 Dyna Puff is an unregulated cartridge brand. You might have seen these running around, they are quite an old package with many sites already covering them. For such a well-established vape cartridge, with so many people talking about them, you’d think there would be one official owner of it. But apparently anybody associated with Dyna Puff has become extinct.

Say this much: Dyna Puff has consistent packaging

Some unregulated brands have “design drift” where numerous counterfeit producers vary the packaging from one batch to another. We’ve seen fake brands like Dank and Runtz go through variations of package design many times over. Not Dyna Puff! This could indicate one centralized source for the packaging at least.

They tested dirty on pesticides, and were also shockingly weak, 16% cannabinoid profile. This shows they were heavily cut, possibly with one of the infamous cut formulas that have landed so many users in the hospital.

The test we have is from June of 2018, so there’s no way of knowing if anything’s different now. But in the case of unregulated brands, the contents of a THC vape cartridge can be completely random. Each puff is a gamble.

Just searching Reddit for “Dyna Puff” uncovers pages of hits, so we’ll just zoom in on a few reports:

So from this, we have learned (a) They are ALL OVER continental North America, (b) they used to be sold on Chinese market sites, (c) they test very dirty, (d) users report symptoms, and (e) they are sold so cheap that users get suspicious.

That’s the only brand of vape cart they post prominently. The Sticky Strainz account boasts “Sticky Strainz Collective// Proudly serving the Inland Empire// We deliver the best bud to your door” and links to a website… currently down with a GoDaddy shingle. But this was clearly a pop-up tent at the Tommy Chong Blazers Cup, and “Inland Empire” is in California (San Bernardino county).

Which checks out. Here’s a screenshot from the Instagram #DynaPuff hashtag, and note the person in the upper left corner. I could have guessed “Inland Empire” just from that photo.

Speaking of Inland Empire, if you want a scary experience, be sure to check out a Dyna Puff cart review done while driving from the point of view of some guy’s lap. We’re not getting into that one for now.

Could Dyna Puff have started out as something else?

Here’s the plot twist that we’ve come to expect from every black market vape cart story: There may have been another product with the same name, which Dyna Puff is ripping off.

We keep running into this wax company also named “Dyna Puff” which sells this concentrate. There is apparently a Dyna Puff wax brand being sold in Los Angeles dispensaries, even seeming to come from a company called “verified genetics.” However, that name is another dead end, no results coming up on any license search we can find.

In any case, the logo, the packaging, the whole style of the product is as different as night and day. For one thing, California packaging law forbids cartoon characters, so the Godzilla carts coming from the Inland Empire are guaranteed to be black market. So we have a completely different company that only made wax at one point, and then we find this sole example:

That uses the wax company’s logo, but it’s a vape cart. Not only that, but it’s completely compliant packaging, even down to the proper codes cited and the Instagram contact address of DynaPuff420 – wait, we were just there!

How to explain this? We have reached out to that Gmail account on the package and gotten no word. Either there was a legit company that traded hands, the Instagram account has been sold or hacked, or the same person or people behind it just decided “Naw, why be legit when being a party street brand is more fun?”

Every day, another mystery. The bottom line is that companies need an address, a contact, a website, an official registration, a license. A company needs to be tangible in some medium or another, or we have no idea what’s going on and hence no reassurance what we’re putting in our bodies.

Unlicensed, unregulated brands like Dyna Puff may contain anything

There is a deadly epidemic of lung illness tied to black market cart usage. Vaping-associated pulmonary injury has so far claimed 55 lives and hospitalized more than 2,500 users. Unregulated vape carts could contain heavy metals like lead, pesticides, cut such as Honey Cut, or simply bunk. Or they could be fire if you’re lucky. But a lot of people in the hospital right now weren’t lucky.