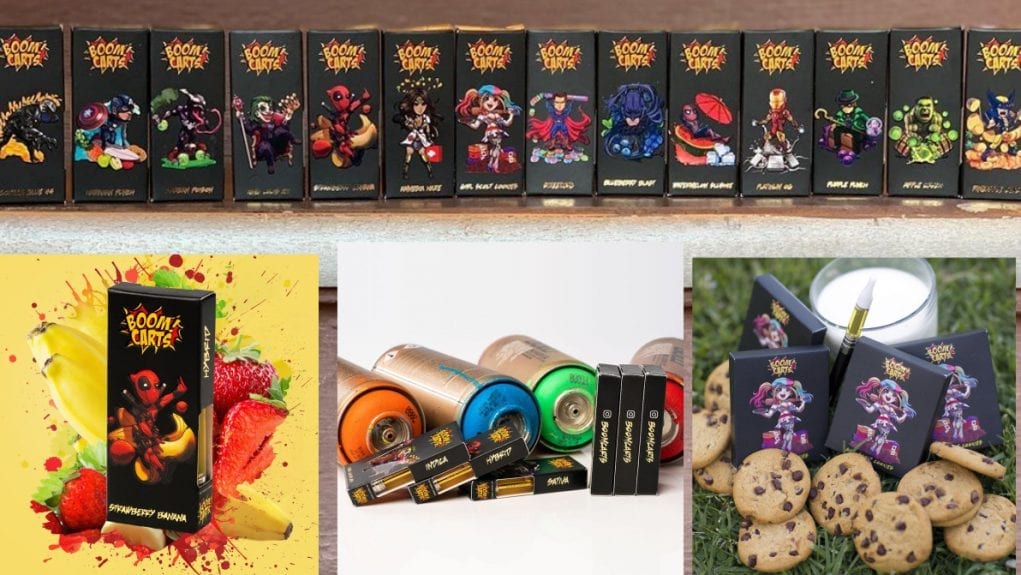 We’ve seen Boom Carts kicking around for awhile. They may have started out as a single-source street brand, but they’re becoming just another empty cart on the black market to fill with mystery oil. Plus their packaging is obnoxious. It’s about time we lowered the boom on Boom Carts.

Boom Carts have people asking about them

On Reddit’s oilpen-related forums, we have a couple sightings:

When we see a black market brand live on the street like this, that prompts us to cover it.

We also find them on WeedMaps (which has become just another Alibaba / DHGate when it comes to black market brands) with an interesting detail to the listing.

Aha! A delivery service called Green Bakery, run out of Los Angeles, California, seems to be the only source. When we look on Green Bakery’s listing, sure enough on page 2 there’s the Boom Carts. Whenever we see a delivery service and a THC cartridge brand hooked up together but neither with anybody else, it’s almost always a sign of a single source street brand.

But that source has apparently lost control – this happens with black market packaging – and now the #boomcarts hashtag spreads on Twitter from other black market dealers who also tout Smart Carts, Cookies Carts, and other known counterfeited and bootleg brands.

You might ask, “What was our first clue that this is an unregulated brand?” Well the packaging speaks for itself:

Clearly, the use of copyrighted characters from both the Marvel and D.C. comics universe is a blatant black market packaging ploy, with Cart Toon Carts for just one of many examples. Marvel is currently owned by Disney, so Disney lawyers would be all over this if they could find somebody to sue.

The use of cartoon characters also violates THC cartridge packaging guidelines set by the California Department of Public Health – recall the Green Bakery located in L.A., which puts them in California’s jurisdiction.

We don’t allow cartoons on THC packaging for a good reason!

The reason we have these standards is because we don’t want kids to see the packaging and think this is for them. Leaving aside the issue of exposing a minor to cannabis, we’re in the middle of a black market vaping health crisis, with thousands hospitalized and 42 deaths at last count. The youngest victim so far has been 17. The nicotine vape company Juul has been hit with a lawsuit in part over their alleged marketing to minors.

In the middle of all this, the last thing we need is for little kids to pick up a black market cartridge and think “must be safe for kids, it has Deadpool on it!” Can we be the responsible adult and point that out here?

We don’t see this often, but there’s a model they apparently found to pose with some packaging. She’s in quite a few shots.

Unlicensed, unregulated brands like Boom Carts may have anything in them

They could contain heavy metals like lead, pesticides, cut such as Honey Cut, or simply bunk. Or they could be fire if you’re lucky. But a lot of people in the hospital right now weren’t lucky.