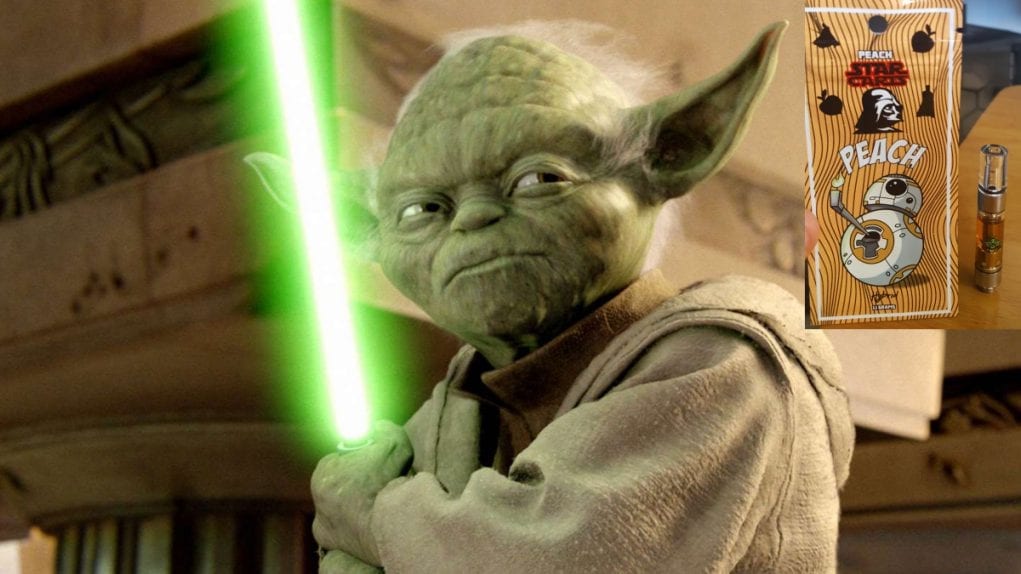 Fake cartridges are all over now. Some are copies of other brands, like fake Brass Knuckles or fake Cookies carts. The others are fake brands in the sense they are just printed packaging from China and could have any oil in there. Star Carts fall into the latter category.

Also known as Star Wars carts, they are a fake cartridge brand. The hardware has not been tested for heavy metals and the oil you get in it could be good or bad.

Star Carts could have any oil in them

They’re popping up everywhere, even on WeedMaps…

Flavors we’ve seen so far include “Peach,” “Skywalker OG,” “granddaddy purple,” “Larry Bird OG,” “Lemoncello,” and something that looks like Jar-Jar Binks that might be a pun on Cookies. As always, strains and flavors mentioned on packaging mean nothing.

Sometimes they’re showing up as “Star Carts” too. Ditto, any name variant with any tie-in with the Star Wars media franchise is guaranteed to be bunk. Get your 710 from another pen. Also, the Present Author can’t recall ever seeing a “made in Massachusetts” certification on a black market cartridge before. Massachusetts is banning all vape products for four months. That applies to all sales, even licensed dispensaries.

As always, the risk with fake carts is the mystery contents

There has been a rash of deaths related to vaping impure concentrations lately. It’s a serious enough problem to warrant high-level busts of fake cart distributors. Black market cartridges carry the risk of contaminants such as vitamin E acetate, lipids, heavy metals, and pesticides. Star Wars carts  could be filled by anyone using any oil. There’s no validation for any of the processes.

Strength, flavor, and effects could very from one location to the next. They might be cut with MCT oil, Propylene Glycol, Vegetable Glycerin, even the deadly-when-vaped Vitamin E acetate.  Not to mention just straight getting ripped off with bunk contents entirely.

From the Dark Side, they are. Avoid them, you must.

What if Disney found out?

The Star Wars franchise, in case you didn’t hear, was acquired by Disney. The Walt Disney Company is a diversified multinational mass media and entertainment conglomerate, which obviously would never sign off on having their characters depicted on THC cartridges in a billion years.

But with the massive legal clout Disney has, it wouldn’t be a surprise if they threw a few lawyers at this problem. If they can’t go after the offshore counterfeiters, they could at least pressure the commercial enablers through whose channels these fakes reach our shores.

Have you run into Star Carts?

Tell us about any street sightings you’ve seen of these or other fake brands. Here in the comments or in our forum.