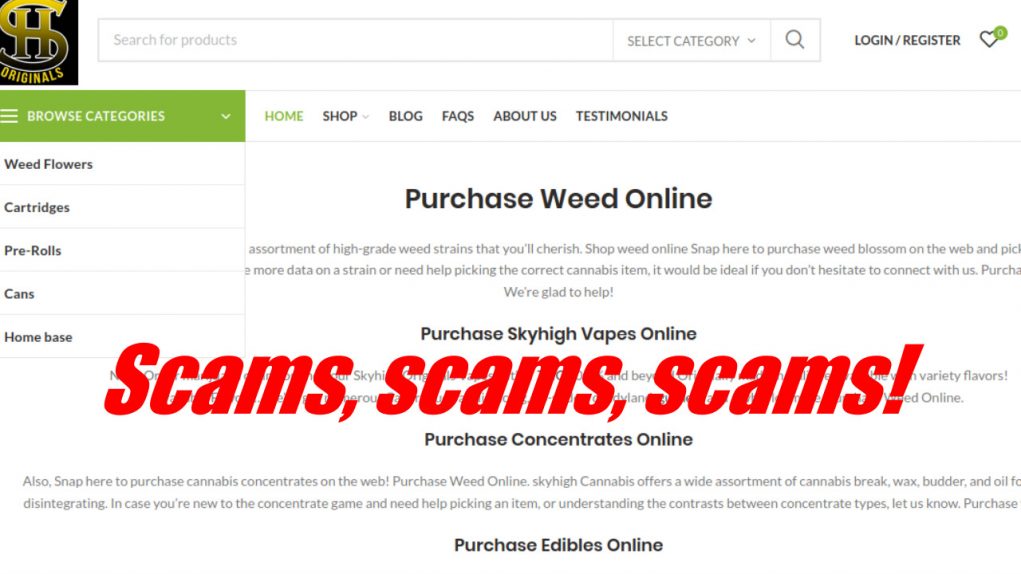 Previously, we wrote about QualityVapeCarts.com and DankVapesCarts.com, two online retailers which had several complaints against them for scamming people. Then after we wrote those up, we found some more sites running the same kind of scam.

Well, since then, our comments section on various pages over the years, as well as the occasional forum thread, have accumulated a menagerie of scam warning about yet more sites.

Note that we are camel-casing the URLs to make them easier to read, because in many cases the difference between domains comes down to a single letter. Actually, URLs are case-insensitive. (Try it – Google.com, google.com, GOOGLE.com, and every other variation all go to Google.)

These again are just the sites reported by readers as scams. They operate by putting up a site offering cannabis products ranging from flower to vape carts for sale with shipping, just as if you were ordering from any eCommerce website. They insist on payment through an offbeat method, such as Bitcoin, Moneygram, Zelle, or even gift cards. Then they delay you and sometimes even give you a fake tracking order number, but never deliver. If you contact them with a complaint, sometimes they’ll even threaten you in an attempt to intimidate you out of getting your money back or reporting them.

See the example provided for QualityVapeCarts.com, where a user captured screenshots of the entire exchange. This is a typical script, and as long as scammers keep getting away with it, they’ll keep doing it. 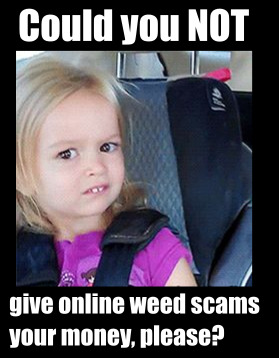 We see commenters reporting losing hundred of dollars to these sites! If they get somebody to bite even once, they make money! That’s a profitable theft because it only costs about $15 to register a domain and ~$10 or less to keep it active for a month.

Here’s the deal: Mailing any weed product is illegal in the United States. You can ship paraphernalia (bongs, rolling papers, grinders, etc.). You can also, under the 2018 Farm Bill, ship industrial hemp and CBD products. Actual THC-containing substances of any kind, be it vape oil, hash, or little green nuggets, is illegal.

This applies even between two legal addresses, because postal regulation is a matter of Federal law. It also applies not just to the Federal Post Office, but to UPS and FedEx and any other shipping channel you can name. Here’s Shipping School on the whole cannabis matter. 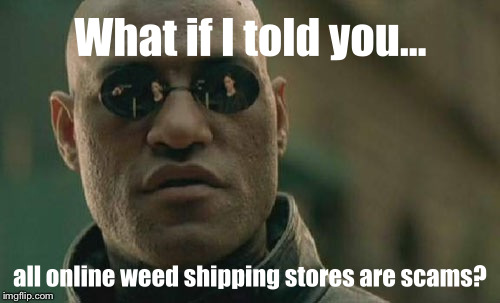 Since shipping weed is 100% illegal, there can be no legal enforcement of a company selling you weed online. Call the police all you want to, it would be just like reporting a street dealer for selling you bad crack cocaine.

This applies to United States jurisdictions only. In Canada, you most certainly can send weed by Post Canada. Sounds like paradise, doesn’t it?

On top of all that, we already know about the fake cart epidemic, so you should know even better if a website offers a common fake or counterfeited brand. We’ll go so far as to say that if you’re ever dealing with any entity that offers a cartridge brand like Dank, Mario, Cereal, Bart, etc., they are 100% scamming you somewhere, because honest businesses wouldn’t traffic in these. 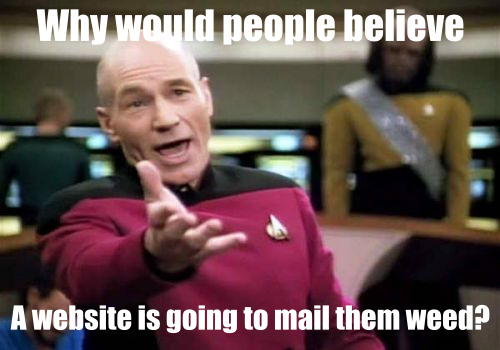 Why do people keep falling for this scam?

This appears to be a natural side effect of the curious state of cannabis legalization. We have this bizarre case where it’s legal in one state, but not in another, with gray areas in between. When you have different laws by location within the same country, people tend to not take it as seriously. They’re used to skirting state borders to dodge around different state laws.

For example, every 4th of July, chances are people in your neighborhood manage to obtain and shoot off some fireworks, regardless if your area allows it or not. You would never suspect fireworks from the next state over to have anything fishy about them, because gunpowder is cheap anyway. However, nobody expects to receive fireworks through the mail, because all explosives are also illegal to mail.

Likewise, other controlled substances are widely known to be illegal all over the country, so you would know right away that a website claiming to sell sheets of blotter acid would obviously not be kosher.

Further complicating matters is the exception for CBD and industrial hemp products. When you can buy CBD bath bombs for ten bucks at a department store, it really confuses people as to what’s legal and what isn’t. We don’t have this situation with anything else. It’s not like we have an alternative version of methamphetamine with less ephedrine that’s legal anywhere.

NOTE: None of this applies to local delivery services (those can be legit)

A few commenters here seem confused on this point, so let’s clarify: When we say “shipping,” we mean packaging and sending products through a postal shipping service, be it USPS, FedEx, UPS, whatever. A delivery service is a local dispensary offering to personally deliver product via courier. Most US states which are legalized for adult-use / recreational, or have full medical legalization, do have licensed courier operations.

Several Las Vegas area dispensaries which deliver. The difference here is that shipping is an interstate process, even if the package is going nextdoor, because it involves a federal-spanning entity. Dispensary delivery is local, and is handled by the dispensary itself or a licensed courier service (some states allow separate entities to be licensed just for pick-up and delivery). You can easily check if a delivery service is legit just by looking them up on Google Maps and the accompanying My Business listing.

It’s the difference between ordering a pizza and sending away for products out of a catalogue. Everybody clear now?

Are we all clear on scam sites at last?

You all can keep reporting scams where you find them, of course. We might even see people endorsing online THC product shipping stores. We’re going to put our foot down and say you should avoid any business that claims it will ship a THC-containing product to you, until laws change.