Home Culture Lucky Carts Seem To Be A Street Brand 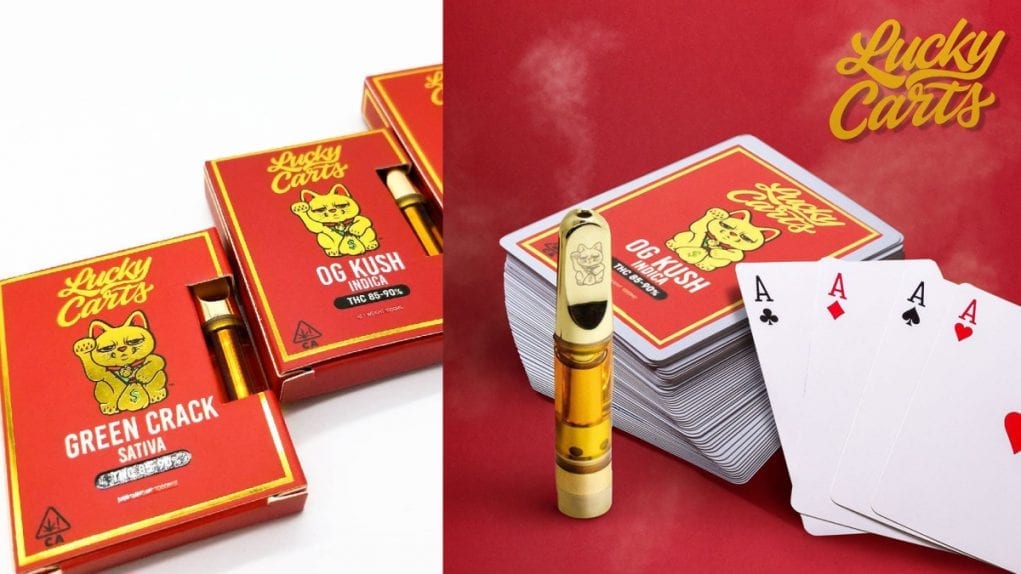 Today’s street cart bust post is such a headache to research, we’re ready to bury it in the sandbox already. There’s a brand of vape cartridge called “Lucky Carts,” which has (so far) distinctive packaging: A red box with a familiar Asian cat figure embossed in gold on the packaging. And of course, no company behind it.

Lucky Carts: Nobody owns it 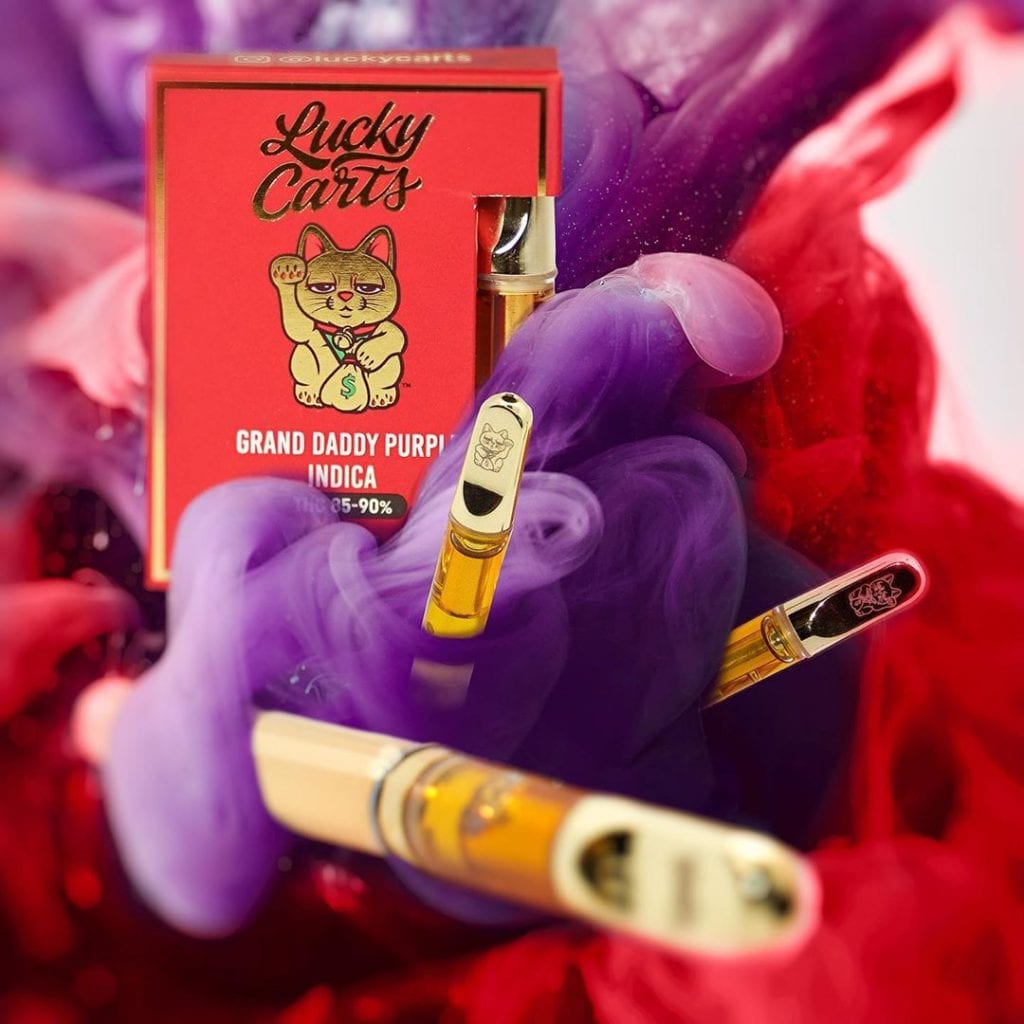 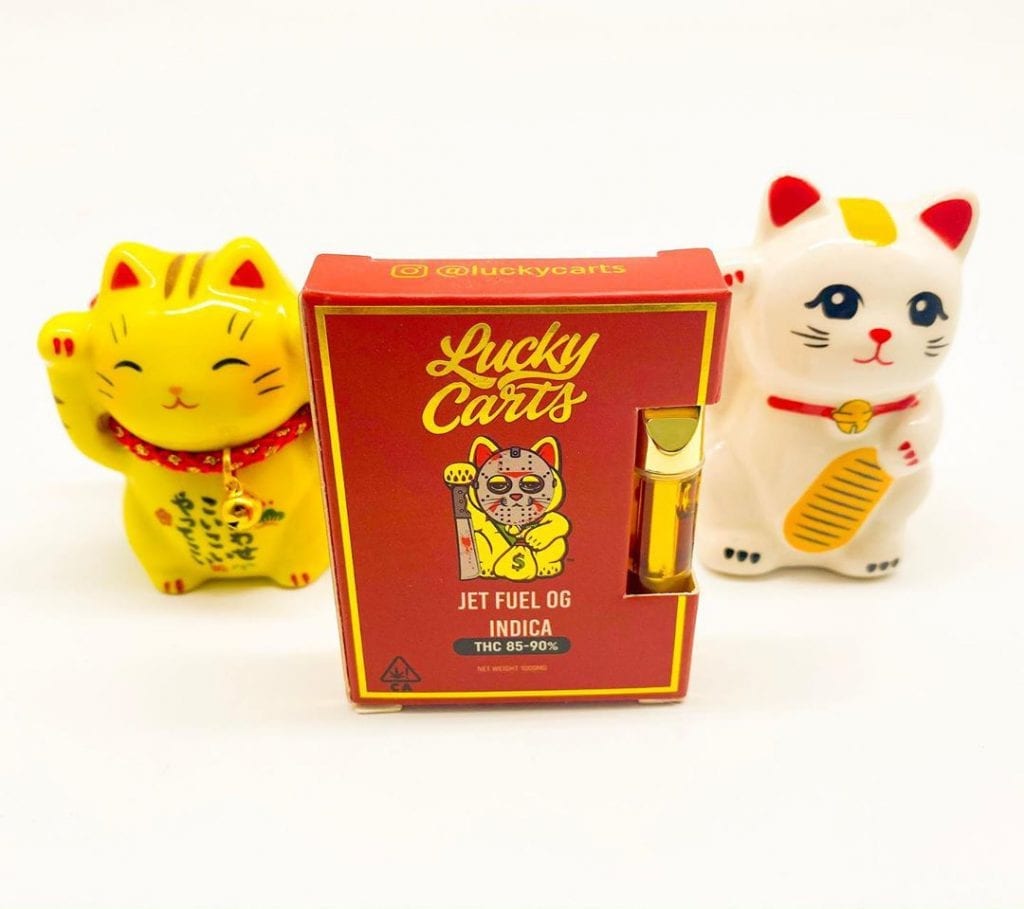 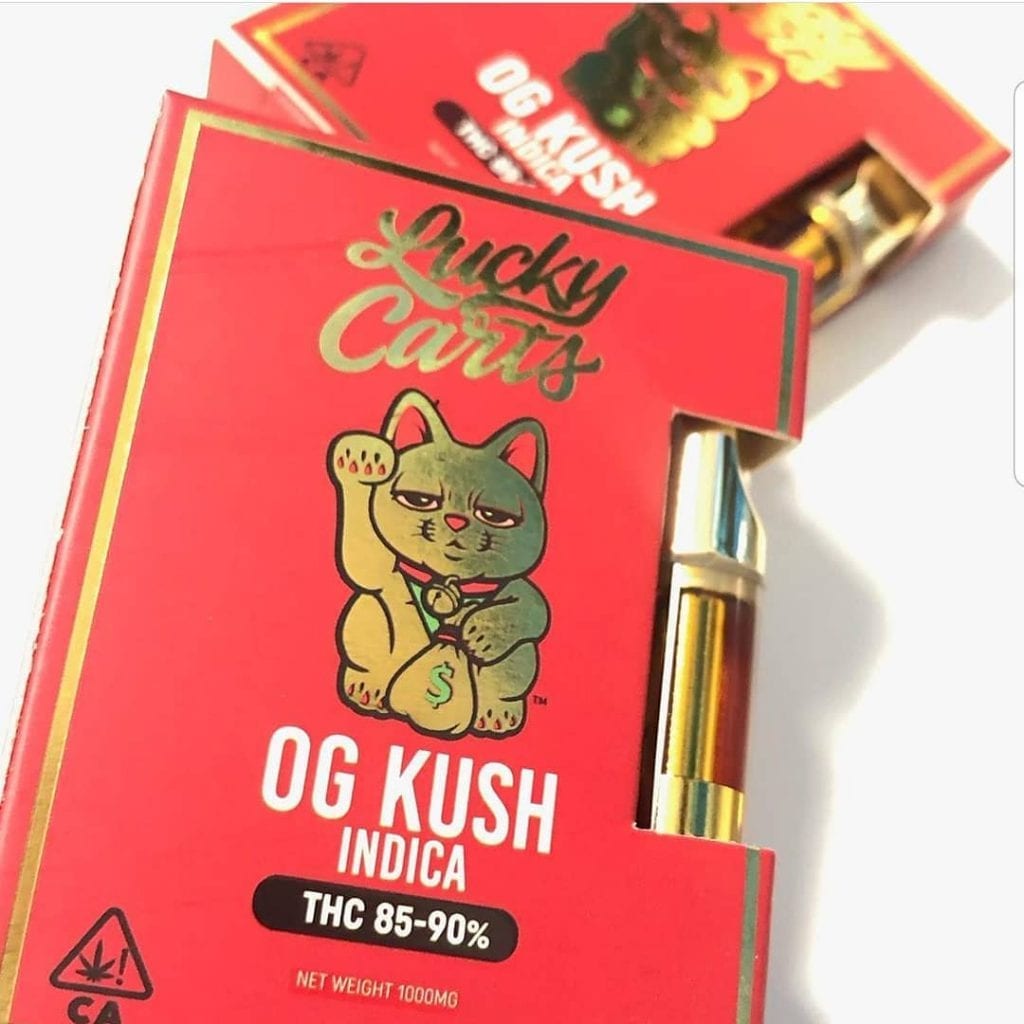 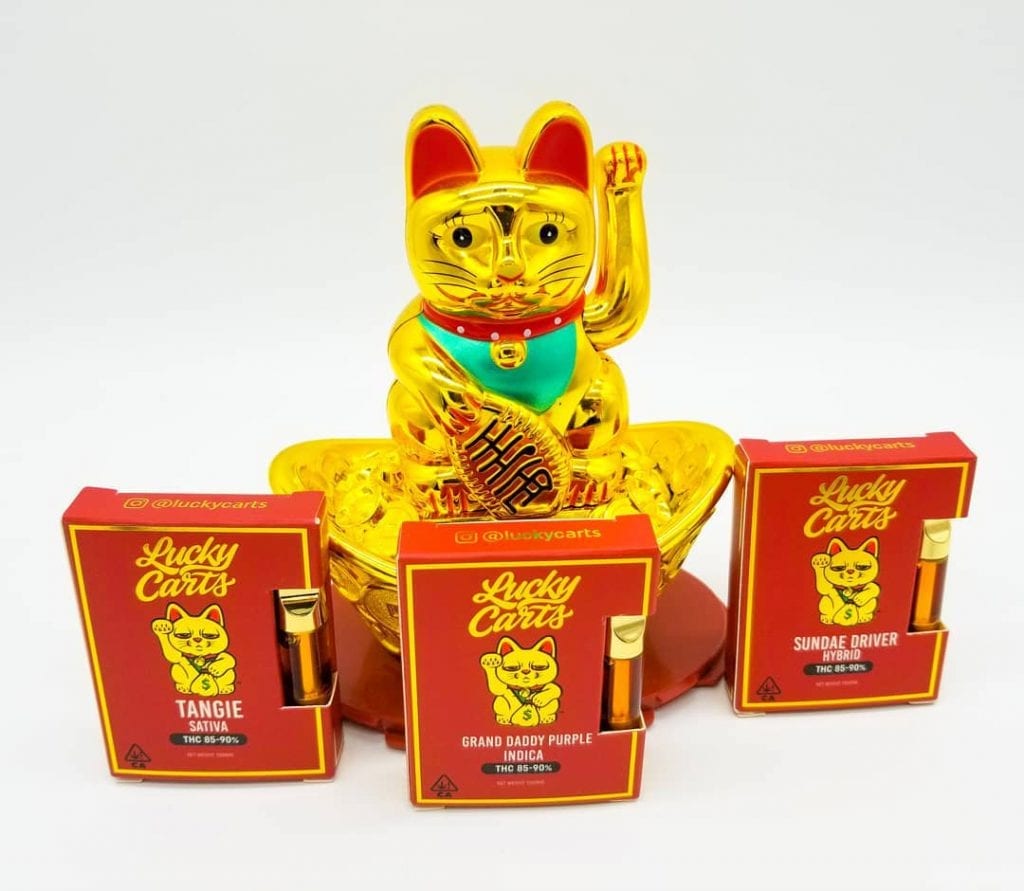 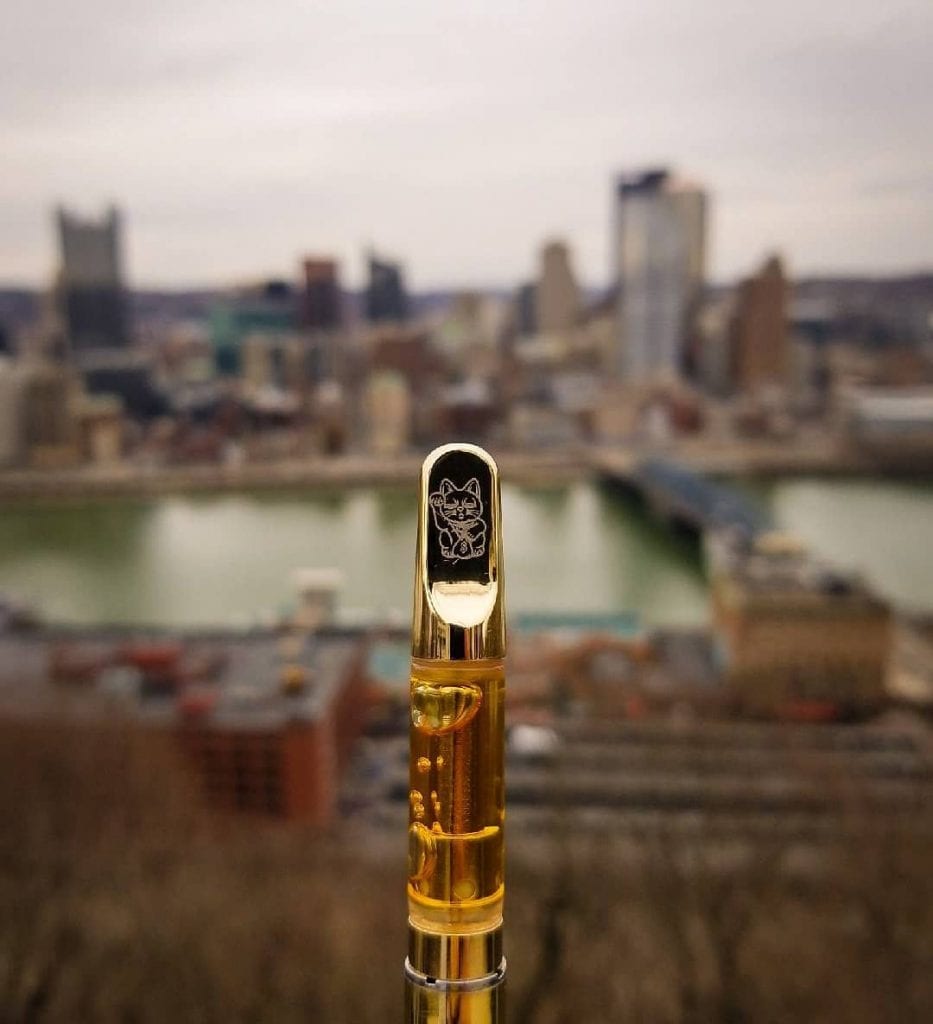 They seem to go by the full name of “Lucky Carts Medicated Vapes,” which is extra-sneaky as they sound like they could even be CBD. However, they go to the trouble of printing a THC percentage right on the packaging, so that rules out medical CBD purposes.

To say nothing of the strain names.

If the waving cat looks familiar, that’s Maneki-neko, literally “beckoning cat,” a universally adopted mascot of small businesses throughout Asian culture. While Japanese in origin, it gained popularity in China and has since become a cultural meme figure as common in the east as Santa Claus in the west. It’s supposed to represent good fortune and success. You’ve seen these behind the counter of every other ethnic Asian restaurant or several kinds of small business that’s Asian-owned.

This is like naming your product “Uncle Sam,” using the most generic public domain figure possible. This makes it just about impossible to both properly market and investigate, due to all the duplicate results.

Lucky Carts are found in all the unluckiest places

Yes, there’s the poker card deck in our banner image on that Instagram. Maybe telling us you’re gambling with your life when you vape mystery oil.

We also find them on a couple sketchy retail sites, including one advertised by “Cannabis on Wheels” delivery service out of Huntington Beach, California. (Hello, old surfs buddies!) 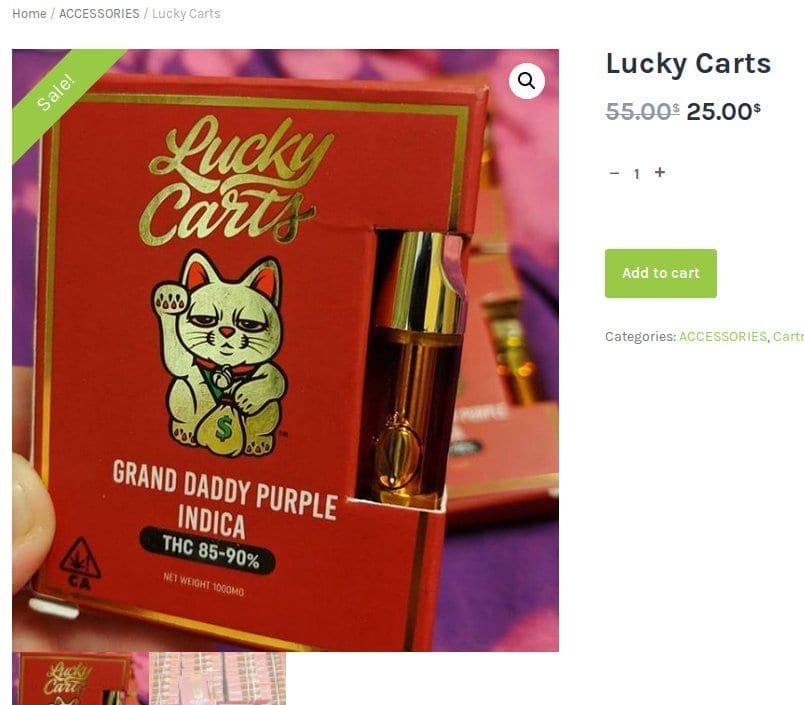 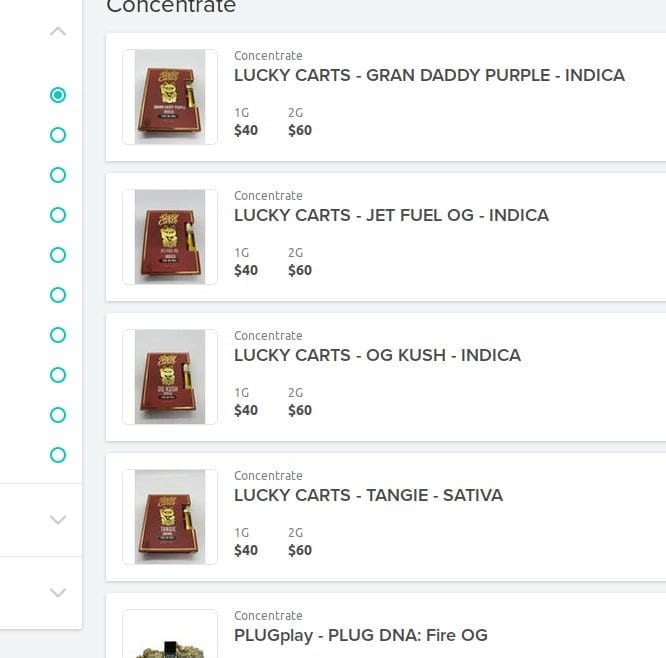 These have been reported many times on the Reddit fake cart watch beat. Note the neko logo also on the tip. Earliest wild sighting we can find is 4 months ago. One Redditor reported to us that Lucky Carts are flooding Dallas.

Unlicensed, unregulated brands like Lucky Carts may contain anything

There is a deadly epidemic of lung illness tied to black market cart usage. Vaping-associated pulmonary injury has so far claimed 64 lives and hospitalized more than 2700 users, up until February 2020 when the CDC stopped counting. This was the main health story in the news before Coronavirus COVID-19 cases pushed it off the front page, but people are still getting sick off boof street carts. Unregulated vape carts could contain heavy metals like lead, pesticides, cut such as Honey Cut, or simply bunk. Or they could be fire if you’re lucky. But a lot of people in the hospital right now weren’t lucky.

Is anyone going to claim this stray cat?

Do you know where Lucky Carts originated? Have you seen them at a distribution point near you? Feel free to caterwaul about it in our comments or our forums.