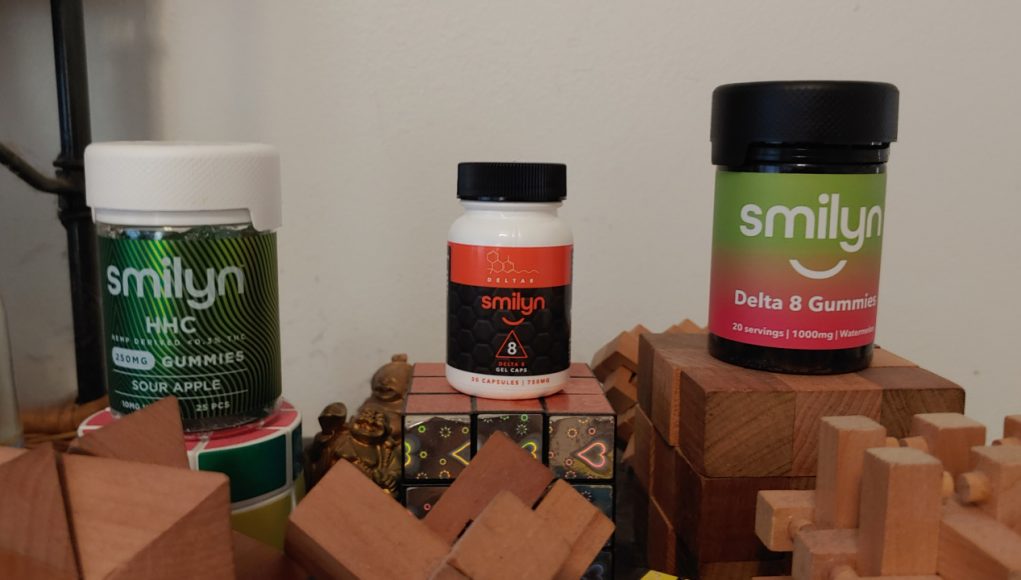 “Penguin” Pete Trbovich is here with another pill-popping adventure! This time we’ll be checking out a sampling of edible products from Smilyn Hemp, of Carlsbad, California. We have delta 8 THC in both softgel and gummy form, and the return of HHC in gummy form. Let’s get snacking!

As always, I remind readers that edibles are a different way to consume cannabis with different rules. You want to have a good handle on your tolerance level, and stick to minimum dosage until you’re sure of your footing. I, myself, chow down edibles by the fistful because I have the tolerance of a battleship (because I work here).

Taking edibles on an empty stomach, first thing in the morning, before coffee, makes them kick in in minutes, while taking them later in the day after a meal or two can make them take hours to kick in. Also, the effect is nothing like vaping or smoking, since some of the vapor or smoke isn’t fully absorbed in your system and builds up gradually, while edibles hit you with the full MG dosage all at once. One more precaution is that edibles stay in your system much longer than smoking or vaping.

Your mileage may vary all over the place. I limit myself to one product per day when taking edibles, on days where I also have to cut all smoking / vaping / whatever activities so that I isolate the effect of the edible itself.

Smilyn – Can we talk about branding?

OK, normally I don’t speak to the company, instead focusing on the end-consumer experience. But in this case, I gotta make an exception. First, none of the three bottles had consistent labeling, so they look like they could have come from three different companies. Second, “Smilyn” as a brand name… 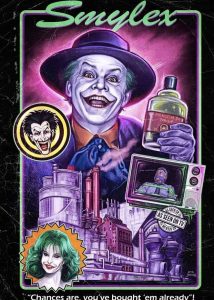 Just a little too close for comfort to a certain fiction brand name from the D.C. universe. I’m sorry, blame the geek in me, but that’s the first place my mind went. Not sure if the marketing department was aware of this connection. Kinda makes it hard to take this company serious, and then I get to the website and it’s popping up one of those “spin the wheel win a prize” sidebars. Tacky! Give your web designer a talk about presenting a professional image.

However, most y’all won’t care beans about this part. Just my nitpick. Let’s get to the products themselves: 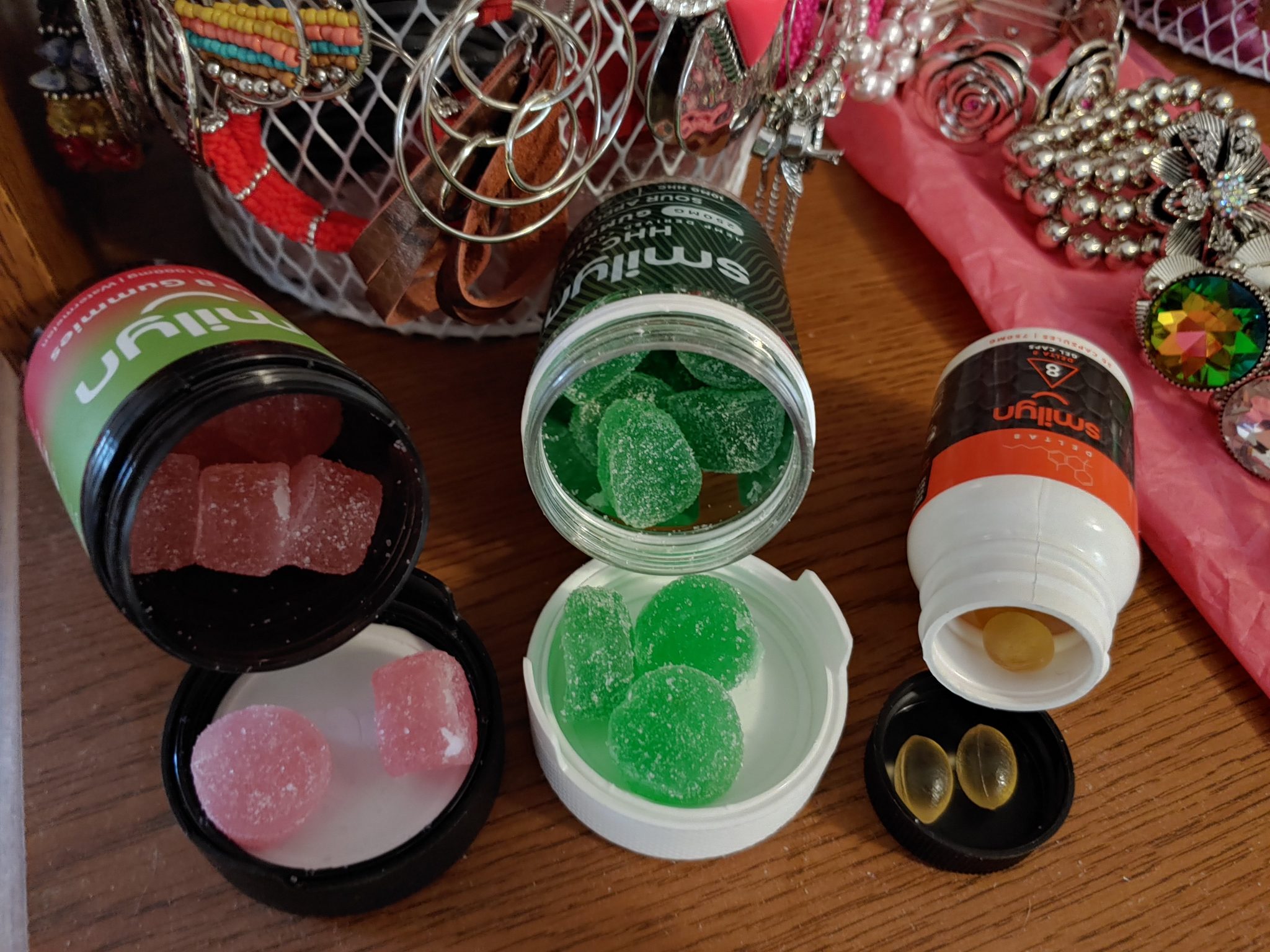 To start with, we have plain ordinary gelcaps, exactly the same as your vitamins you buy at the store. Each capsule contains 25 MG of delta-8 THC. And when we say that, we mean *just* the delta-8 THC. No terpenes, minor cannabinoids, or other full spectrum effects.

As readers should be aware by now, delta 8 THC is like the “weed light” of cannabinoids, having similar effects to “classic” (delta 9) THC, but almost exactly cut in half. You get half the buzz, but that might be ideal for those of you who prefer to enjoy a buzz and still get things done, rather than be baked out on the couch.

So my delta 8 tolerance is up around 150MG before I’m feeling something, and 200MG before I’m nicely toasted. These gelcaps are 25MG. I wasn’t going to gulp down some six to eight pills for this. Instead I opted to test two gelcaps, and sure enough, barely detected that I’d taken anything. Honestly, the only thing I’d recommend the 25MG gelcaps for is medical / therapeutic users who want a small, easily controlled dose.

Also, taking just a delta 8 gelcap with no spectrum effects makes it even weaker than taking it with a side order of terpenes. No entourage effect, no flavor experience. Just kinda left me flat.

Day 2, it was the delta 8 gummies turn. These have a 50MG dosage of delta 8 THC, again without messing with terpenes and other cannabinoids. I opted for a morning coffee dosage of 200 MG, four gummies.

First, the flavor is excellent, sweet and juicy. These are the watermelon flavor, and taste just like candy gummies. Second, the effects kicked in, and I had the exact experience you would expect: I got stoned. I was nicely roasted for the day right there. Again, without the other enjoyable compounds of a full cannabis experience, the delta 8 felt sterile, almost pharmaceutical. But by golly, they did the job!

Out of the three, I liked this best. There’s not a lot to say about them – it’s delta 8, what did you expect? Don’t mistake my brevity for dismissal.

I’m starting to feel like delta 8 holds no further surprises for me, since I practically live on the stuff. I’m ready to rip bongloads of something that will make my eyes water again.

We return to this year’s hip new isolated alt-cannabinoid, HHC. These contain a cautious dose of 10MG, in a sour apple flavor. These gummies were also tasty and sweet, no complaints in the flavor department. I opted for taking three this time. To its credit, it did to me what HHC usually does. Here again, with no other compounds common to cannabis to compliment the experience, the HHC had to do all the work stand-alone. This wasn’t nearly as enjoyable as taking HHC with a couple good terpenes or even some CBD to augment the trip.

HHC is proving to be one of the trickiest cannabinoids to nail down in terms of defining its effects. For myself, the effect is not unlike an adderall or other pharmaceutical prescribed for ADHD / depression. HHC tends to make me focused and productive, and just a little cheery. Again, if you gave me HHC and I knew nothing about alt-cannabinoids, I would not even have identified it as coming from weed. It doesn’t give me any of the effects you’d normally associate with cannabis, save for the part in the far spiky Sativa end of the spectrum where you’re awake, alert, and energetic.

However, other user’s reports run the gamut from “it got me stoned just like pot” to “barely felt anything” to “whoa, trippy dude!” This time, I *think* I just hit the edge of a mild psychedelic effect somewhere in there for a few minutes, but not in a hallucinogenic sense. More like a vaguely “speedy” sense, like you’d get from MDMA or amphetamines. This is ridiculous, because those drugs don’t even hit the same receptors. But maybe, possibly, something in the endocannabinoid system gets triggered off HHC and leaves a similar effect?

I have also discovered that HHC tolerance builds up very fast. If I take it two days in a row, HHC does nothing for me on the second day. I have to wait a week between HHC sessions, and then it hits me with decent effects. I do hear other reports from users who have the same experience, so at least we have a consensus on that point.

Bottom line: HHC is poorly understood, not very well-documented, and so new that there’s hardly a consensus on its psychoactive effects. There haven’t been many laboratory studies on HHC’s effects. We’re all basically the first wave of research right here, eating cannabinoids and wondering what they will do. 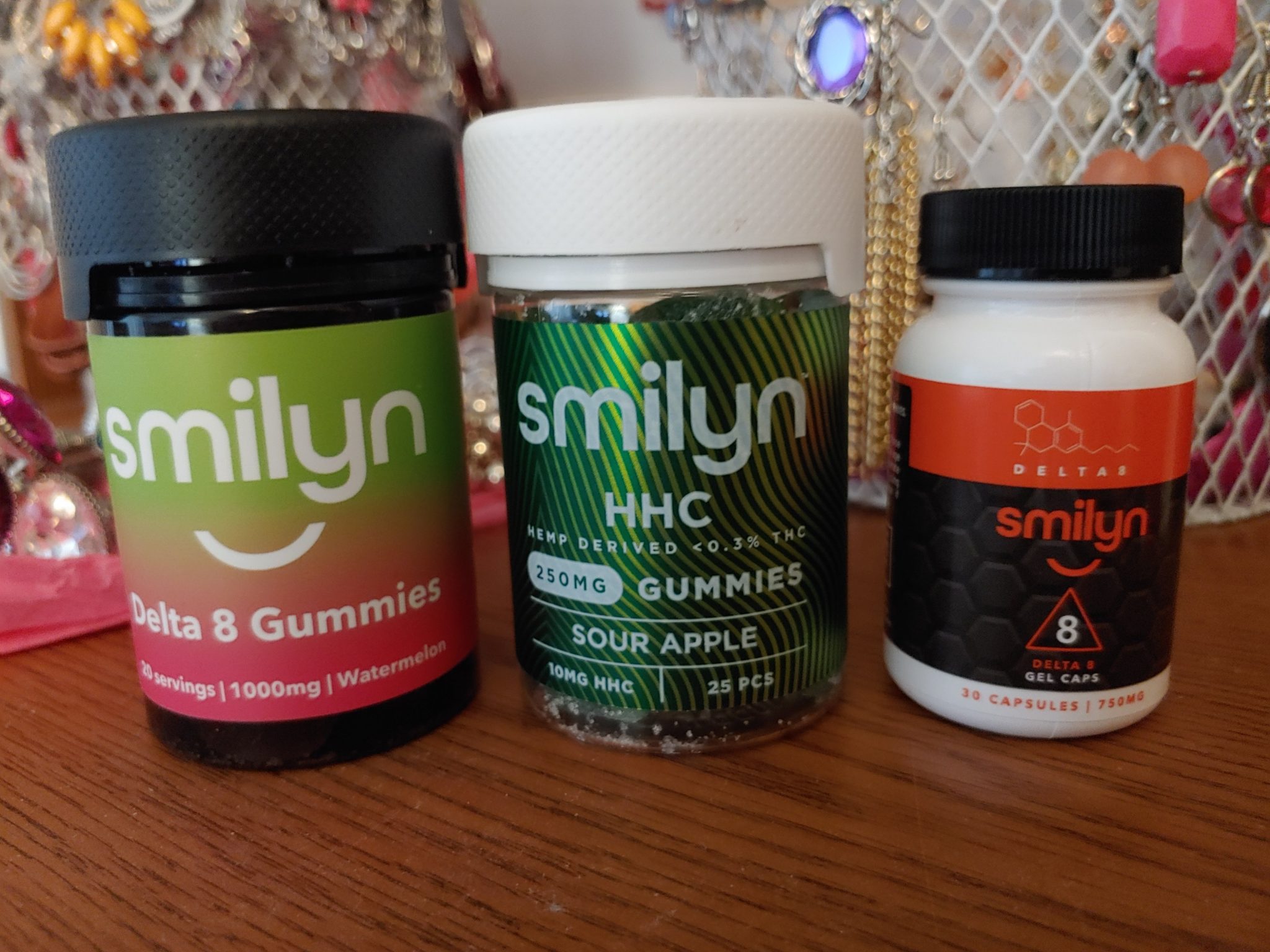 A Very Mild Recommendation For Smilyn

The phrase “it does what it says on the label” leaps immediately to mind. These edibles are well-done and seem to be up to standards, but they come from California, a state which is absolutely drowning in cannabis alternatives. With that said, if you’re looking for a discreet way to enjoy cannabinoid effects in easily controlled doses, these do the job in the most basic way.

Find out all about Smilyn Hemp brand’s products here. Readers, you may share your experience with Smilyn products or help pin down the effects of HHC here in the comments, or in our hip forum.