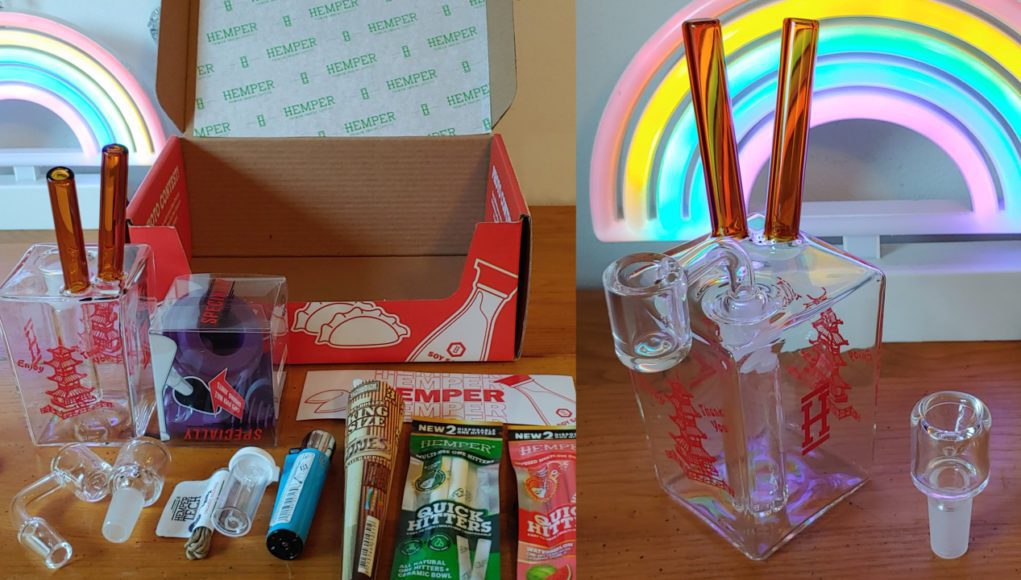 Bonus Buck: We did a quick video review for the third box in the series, the Hemper Milk & Cookies Box, then we wrap for the series.

Recommendations: This is a charming and imaginative product overall! Just try to squeeze a few more nickels of value out of that price and we’re perfect. 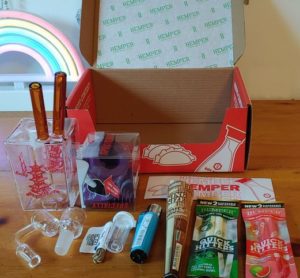 Hemper Has the Ancient Chinese Secret

I’m going to say this upfront: I have been at least impressed with every cannabis-industry gift box I’ve opened so far. I can see the effort companies like Hemper are doing. I can really empathize that it’s tough coming up with a reliable string of products and putting them together in such imaginative packages month after month, all while keeping things cost-effective.

Let’s unpack this and see what we have, going from least to most impressive: 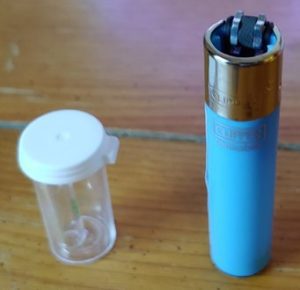 This is your standard-issue Clipper lighter, universal to all cannabis subscription boxes. Except this one time, there’s no logo, no print, no image, nothing. Gee. As for the Hemper Glass Filter Tip, I am clueless as to its use. But it’s a tiny bit of glass, inconsequential in the universal scheme of things. 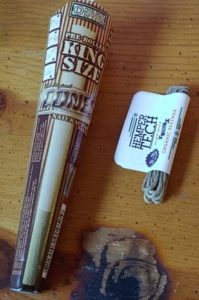 My running joke is that I’m going to save up all the hemp wick I pull out of cannabis subscription boxes and weave a macrame owl wall hanging like in the ’70s. 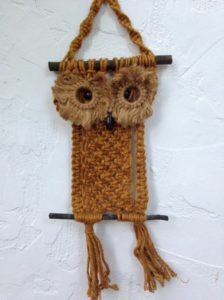 I’ll return to the ’70s in another point later in this review. Anyway, I don’t see anybody using this stuff. Enough hemp wick. As for the rolling cones, that’s more generic subscription box filler. 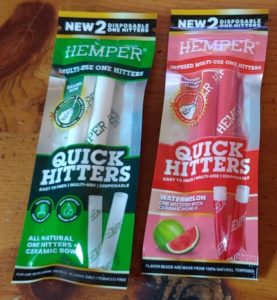 OK, quick one-hitters. At least I don’t see these every day. They’re interesting. I tried a watermelon one, which really didn’t have that much flavor to it on top of the dank I was smoking but works as a one-hitter. I appreciate that they’re biodegradable. This rates an “E” for effort, as sometimes you just want a fast puff-and-go. 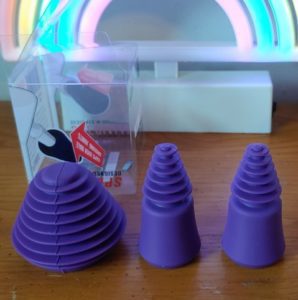 These are “Hemper Tech Plugs and Caps” which are said to be used for cleaning. Huh. I gather that you plug the mouthpiece and so on and then shake the alcohol + rock salt around? Anyway, thank you for the purple bu- ah, I mean plug and cap set. I think one of these would make a good wine bottle stopper too. Stoner engineers don’t mind having extra parts with potential, and I don’t see these every day, so good try anyway.

Take note: At this point, have you seen anything in this box that says “Chinese takeout” to you? Wait, here we go. 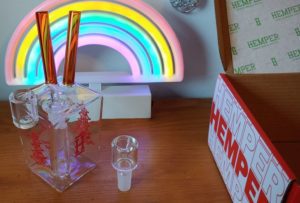 Finally, the showpiece, the centerpiece of the box itself! A+ for execution and imagination, even though – as luck would have it – it’s not the most practical value. I can’t possibly fault this effort and it’s well worth the price just for the glass alone as a decorative, novelty item. Fun to break out for parties, etc.

The Hemper Chinese Box is Only a Fair Value

Obviously, between the Chinese takeout box water pipe, the flower bowl accessory, and the quartz banger, we have the $40 box value right here. Money-wise, we break better than even on the glass and the rest of the box is party favors. But calling this “$100 retail value” as it does on their site is stretching it a bit much.

I would compare the Hemper Chinese Takeout just above the Sensi Box, but way short of the Cheefkit Bongkit Mini.

Now don’t get me wrong, I’ve peeked ahead at the second Hemper box we’ll be reviewing and the story improves. But with the Chinese Takeout box, everything but the glass might almost as well have been packing peanuts here. I have seen the selection of novelty boxes past on Hemper’s site, and most of those do better than the Chinese Takeout box.

So overall, for an ongoing Hemper subscription, I can see this evening out over time. They have some boxes there that are far more exciting than this one. Their 3-box/3-month rate already improves the value immensely. 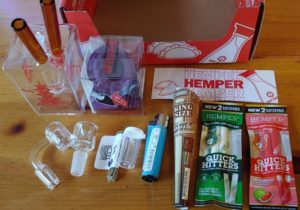 Tangent: Could Novelty Bongs Be Collectible?

The glass piece culture trending in cannabis right now reminds me of the old Avon cologne novelty bottles. Some of them are worth a few hundred now, just for the novelty collector’s value. As a Gen-Xer (remember the macrame owl? I said I’d get back to this.), I saw the Avon novelty bottle fad first-hand. If a cologne bottle shaped like a car can go for $200 50 years later, what could a bong shaped like a Chinese takeout box go for by, say, 2072? I’m just using the closest “novelty glass doohickey” market for comparison.