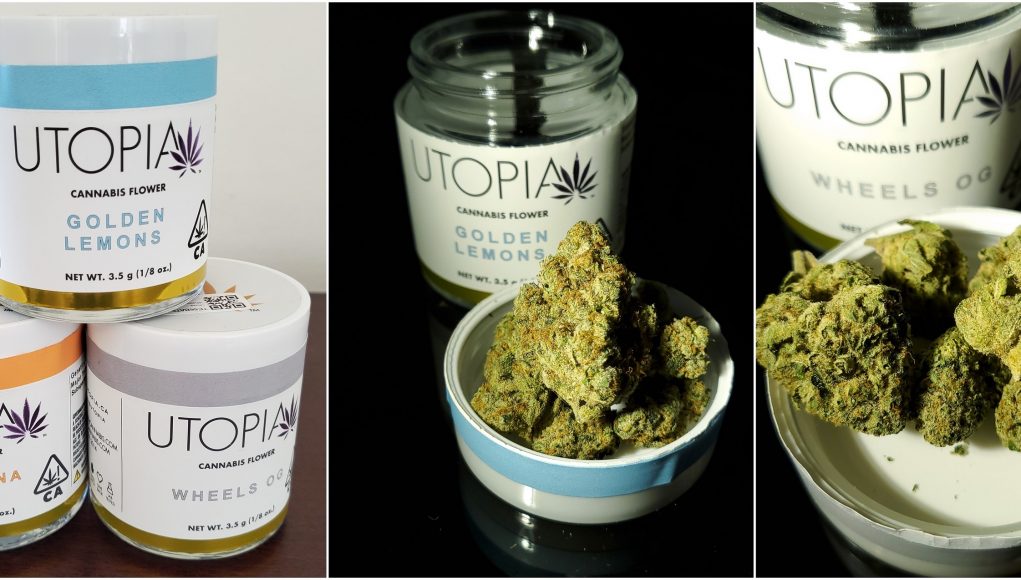 Today we will take another look at Utopia Extracts, which is based out of Santa Cruz. They are particularly well known for their multi-award-winning indoor flower, specifically their Chiquita Banana winning third place for Best Hybrid category during the High Times Cannabis Cup in 2015. First widely known for their critically acclaimed vegan gluten-free macaroon edibles, they moved into cultivating flowers and concentrates during recent years. As I was very impressed by the strong potency of their live resin concentrates, I was curious to try their flower eighths. For this review, I will try a few strains of their flower eighths, which are manufactured in-house from Utopia Farms.

You can check out our video review here.

Recommendations: The flavor could be slightly improved, so perhaps a Boveda humidifier pack would be welcome.

The most balanced yet highly functional effects of Golden Lemons felt calm, relaxing, and uplifting yet still mentally clear

The classy packaging for Utopia Cannabis flower eighths comes in clean and sleek white jars with their purple leaf logo. All the information on the label is clear and easy to read. Along with its genetics and major terpenes listed on the side of the jar.  First, I tried the Golden Lemons, which was first bred by DNA Genetics. It is a slightly Indica leaning hybrid cross of Kosher Kush and Lemon Skunk. When opening the jar, there’s a solid variety of medium to large-sized nugs with a few smaller nugs. 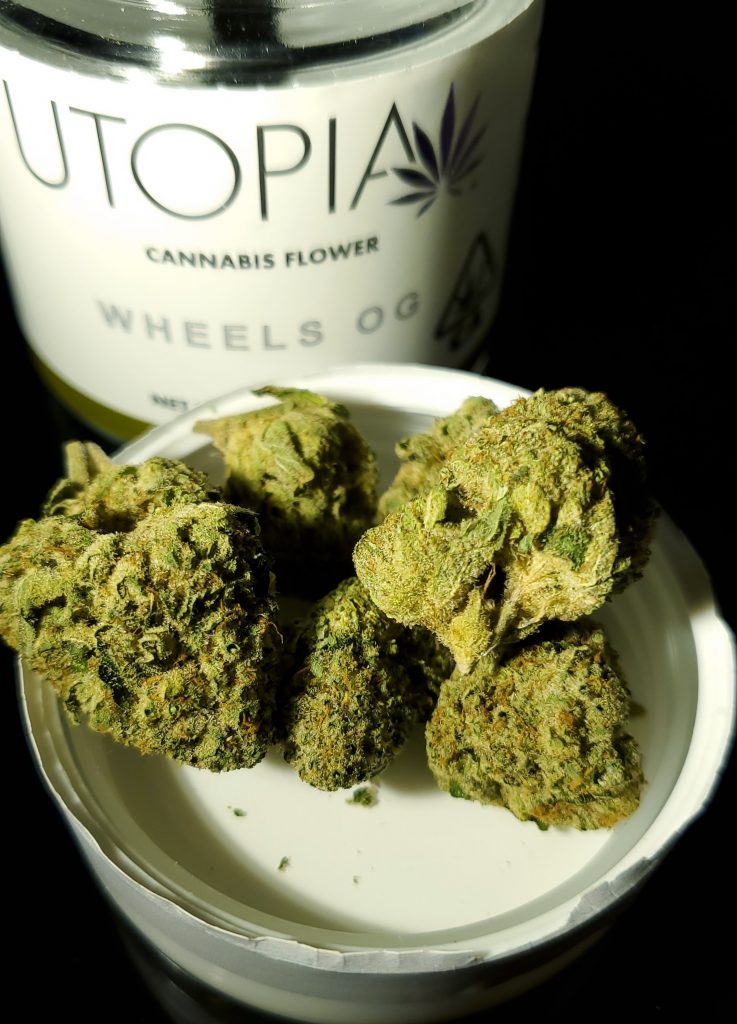 The Indica-dominant effects of Wheels OG produce an initial cerebral head rush. That is followed by a gentle and soothing body heavy relaxation

Next, I gave their Wheels OG a test drive, also from DNA Genetics, an Indica-dominant hybrid cross between Kosher Kush and OG #18. Indicative of its Indica roots, the nugs in this jar were somewhat smaller yet more dense than the nugs in the other jars. The muskier aroma and flavor of Wheels OG are sweet, earthy, and spicy. It also has notes of citrus, mint, fuel, and skunk. After an initial cerebral head rush, there’s a gentle and soothing relaxation felt throughout the body. The more heavily Indica dominant effects felt perfect for nights and weekends. The total THC % of Wheels OG is 27.39%. The total CBD % is 0.06%, and the total cannabinoid % is 33.20%. The major terpenes of Wheels OG are listed as myrcene, limonene, and caryophyllene. 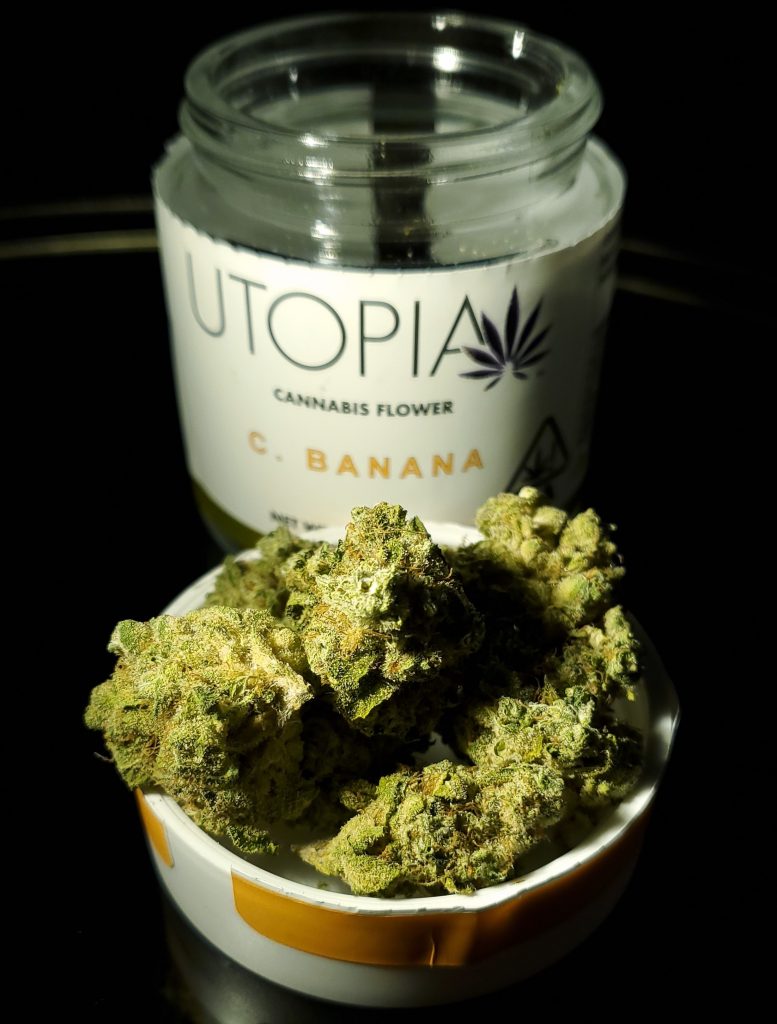 The effects of Chiquita Banana felt enjoyable for any time of the day, similar to Golden Lemons

Lastly, I picked their C. Banana, which is their flagship award-winner. Larger and fluffier in appearance, Chiquita Banana is an Indica leaning hybrid cross between the quintessential OG Kush and Utopia’s very own Banana strain. The creamy aroma and flavor of C. Banana are nutty, earthy, and skunky with notes of banana, vanilla, cinnamon, and spices. Like Golden Lemons, this strain felt enjoyable for any time of the day. The total THC % of Chiquita Banana is 27.22%. The total CBD % is 0.07%, and the total cannabinoid % is 32.35%. The major terpenes of C Banana are listed as myrcene, limonene, and caryophyllene.

The full retail price for Utopia Cannabis flower is $45-50 per jar of eighths. 4-gram jars of small nugs are also available for $36-40 at select locations. Although different in terms of effects, all three strains interestingly land in a similar range of potency. Personally, I feel that the flower eighths from Utopia Cannabis are worth the price for its overall appearance, potency, and effects. However, these strains were slightly harsher and drier than some of the other recent flower brands that I’ve enjoyed, such as Tyson Ranch, Maven Genetics, and Source Cannabis. Still, these nugs seemed fresher and less harsh than Fun Uncle. So, maybe including a Boveda humidifier pack would be highly suggested to keep it fresh and moist, no matter how old the jars.

Utopia Cannabis flower eighths are fresh, tasty, and potent for a fair price. While the award-winning C Banana didn’t disappoint

Have you tried Utopia Cannabis flower? Let us know in the comments or on our forum. 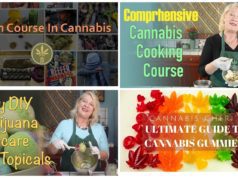