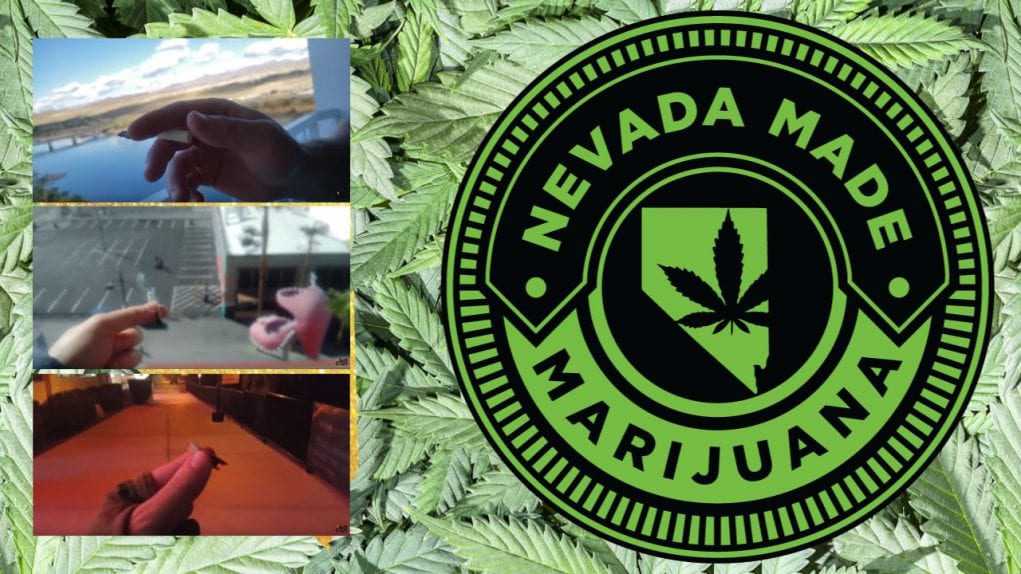 Flower fans, this one’s for you! We here at Dab Connection talk more about concentrates than we do flower, but we’re still down to grind up some hairy nugs and blaze it old-school! Lately we’ve been touring the Western US in the Dabber Dasher, our own RV, as we scout out the top weed in the Nevada state area.

Here’s our reviews on some of the best killer bud in the West. Our apologies in advance for not passing it through the screen to you, but maybe through us, you’ll get a good lead on finding the best weed.

NOTE: This list is just for raw herb in Nevada. If you’re looking for best THC vape carts in Nevada, we’ve covered that too.

First we hit the Laughlin, Nevada boardwalk for some Jack Herer strain flower from Desert Grown Farms. It’s a decent, daily-smoker weed, possibly good for a wake-and-bake. Jack Herer is a sativa-dominant strain noted for a clear-headed, motivated high.

Desert Grown Farms’ version isn’t the best we’ve smoked, but for $25 1/8th we’re not complaining. We would definitely pick the Hendo Cream over this if we’d had our ‘druthers. Desert Grown Farms’ Jack Herer has a bit of a swampy aftertaste to it. This is a middle-shelf brand that is a solid budget choice.

Later we sampled Desert Grown Farms’ Hendo Cream, at 24.3% THC. Here again, we don’t call them top shelf, but consistently satisfactory quality. At Essence dispensary, we got this for $120 for a full ounce, so once again, it’s a bargain price for decent bud. Hendo Cream is an energetic Sativa strain with a great aroma and flavor. The price made this an unbeatable weed.

This preroll comes in at 22% THC, costing around $14. It’s the Gelato strain from Cheech’s Private Stash, who’s not going to let Tommy Chong get all the brand endorsement. Gelato is a hybrid strain from the Cookie family, with a fruity flavor. It’s not recommended for wake-and-bake, being a pretty heavy strain that relaxes you physically.

Despite our faith in comedy legends starting their own cannabis companies, we have to conclude that Cheech Private Stash Gelato just isn’t the best preroll we’ve smoked. We can think of several brands we’d rather be blazing. It is better than a Redwood, we’d give it that. It doesn’t stack up to a Grower’s Circle preroll, however. “Stunningly average” is about the best call we can make.

Deadhead OG is a sativa-dominant strain with a spicy pine aroma, a pungent character, and an earthy flavor. We tried the Remedy version, which inspired us to roll up a fattie and blaze. It was dank and moist.

We rate Remedy Yourself Deadhead OG a great smoke. It has a creeper effect, coming up on you slowly, then leaving you well-baked. It’s everything you’d expect in a strong, skunky bud.

We swung the Dabber Dasher over to Las Vegas, where we learned: Don’t judge a flower by its wrapper! Greenway Medical‘s packaging looks plain, but the contents delivers. Secret Weapon is a Sativa-dominant strain with a happy, uplifting effect that knocks your stress right out. It has a wide range of tastes from fruity to spicy.

We rate Greenway Medical Secret Weapon one of the best buds we’ve smoked. The flower’ potency is an amazing 29.51%, and we felt every decimal point, yet it wasn’t tiring. The flavor and aroma was among the tastiest we’ve had in Las Vegas and the bud burns smooth.

We were so delighted with Greenway that we bought up a few more buds. All of them have great taste and are very strong. UK Cheese (26% THC) doesn’t have a strong a cheese flavor, which we’d call a positive. Curious George is a high-energy strain. Louis XIII OG is an indica strain that’s more relaxing.

Aboard the Dabber Dasher, we enjoyed some Willie’s Reserve Tahoe OG from Tahoe Reno Botanicals. Tahoe OG is an Indica-dominant strain known to be fast-acting and very mellowing. It is a top couchlock strain, recommended for nighttime. Our Tahoe OG clocked in at 26.25% THC potency, so it was a good thing we were sitting down.

Most of the time, we’ve noticed that celebrity-endorsed labels tend to disappoint. It’s like the celebrity took his paycheck directly out of the weed’s potency. Not so with Willie’s Reserve! Willie’s Reserve, the namesake of country-music star Willie Nelson, lives up to everything you would expect from a big weed brand. We found this gram to be strong and chock full of crystals. Good stuff, we’d smoke it any day!

Back to the Riverside Hotel overlooking the Colorado River in Laughlin, Nevada, we checked out some Nature’s Chemistry flower. Wookie is a strain known for its uplifting buzz and floral taste. These bugs have frosty trichomes and had a piney scent. It’s an energetic Sativa strain.

Back aboard the Dabber Dasher for a few puffs of Body and Mind (BaM). Body and Mind is a multi-state operator representing California and Nevada, and with medical dispensaries in Ohio and Arkansas. We expect to post some more about them further on down, so check back. This is the Hardcore OG strain, an Indica aimed at the veteran smoker as its name suggests. Its potent oil is a favorite extract for concentrates.

We liked Body and Mind Hardcore OG so much, we had to try it twice. It is one of the best buds we’d had in awhile. Their Hardcore OG is smooth and tasty, with a THC concentration of 23.581%. Its potency knocks us out. We go right to sleep after one of these. This strain makes a great nightcap at the end of the day, definitely recommended for removing stress and relaxing. Needless to say, Body and Mind get our top rating.

Still in Laughlin, we tried Polaris MMJ Head Cheese, whose funky name comes from a cross between Headband and UK Cheese. It’s a Sativa-dominant strain used widely in medical applications. It’s known for a high both relaxing and euphoric, down to cure what ails you.

Readers, what else have you found while toking your way across Nevada?

Is Nevada just the best state for pot? We’ve tried a few states now and Nevada has them beat. Tell us of your weed travels here in the comments or in our chill forum crib.