Today I will be looking at West Coast Cure Solventless Hash Rosin, which I’ve tried several times this year. I’ve tried most West Coast Cure products which include their flower, cartridges, concentrates, and pre-rolls in the past couple of years. Recently, I’ve been extremely satisfied with their selection of concentrates, which include live resin, hash rosin, diamonds, and fresh press live rosin. I particularly enjoyed their Cookies and Cream hash rosin, Tropical Storm hash rosin, and Strawberry Bananza fresh press live rosin. However, for this review, I will look at the pros and cons of their Garlic Budder Hash Rosin.

Recommendations: The live rosin is usually dry and often needs some whipping up. 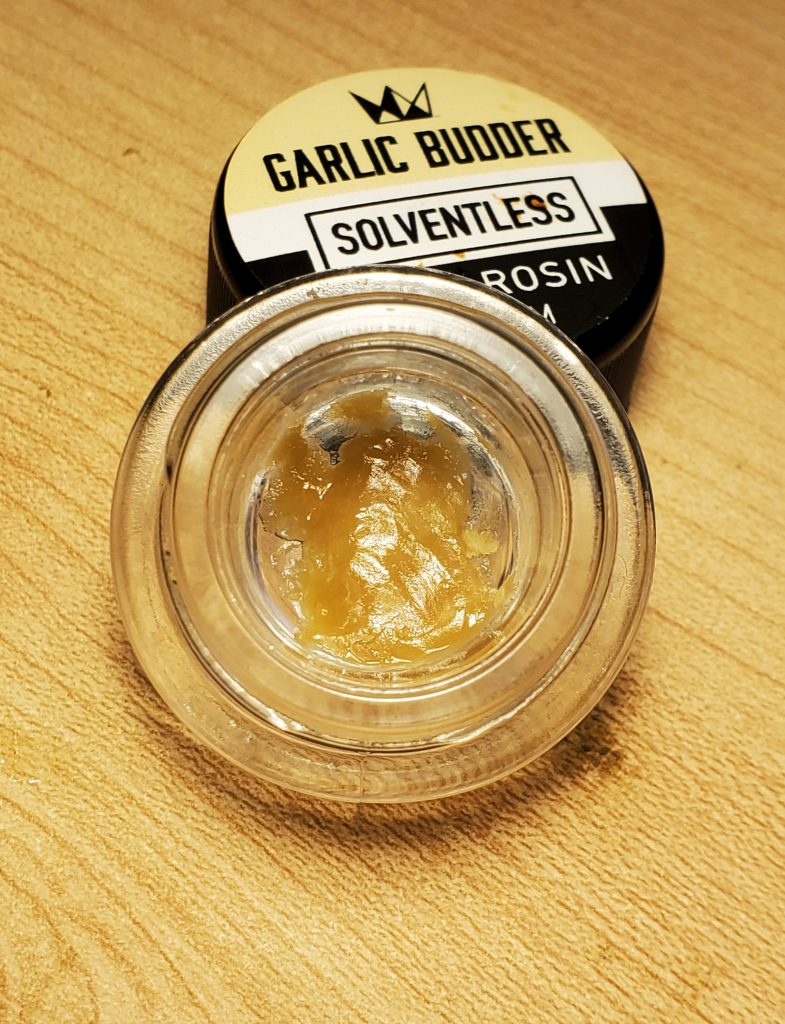 This Garlic Budder hash rosin is an Indica dominant hybrid between GMO Cookies and Melon Ringz. When this rosin is whipped up, this hash rosin has a nice shiny gloss with a very pleasing hue of dark golden brown. This hash rosin was similar to most of their other hash rosins, which is usually a little dry. It also looks like the hash rosin from the collaborations between Golden State Banana and Kalya Extracts, in terms of its somewhat drier appearance. This Garlic Budder hash rosin has a sweet, nutty, earthy, and floral aroma. It has tropical hints of fruits, melons, and berries, also reminiscent of cinnamon pastries, garlic bread, and caramel flan. The taste is even better than its aroma, which is similarly fruity, floral, and earthy with a light tropical finish.

This Garlic Budder hash rosin felt almost as strong as the Feeling Frosty cold cure hash rosin when whipped up. The effects were creative, relaxing, and euphoric. After a nice cerebral uplift that is felt to the head before settling into the body as I eventually went to sleep after a few hours. This Garlic Budder was similar in quality to the other West Coast Cure live rosin strains such as Cookies and Cream, Tropical Storm, and Strawberry Blondie. 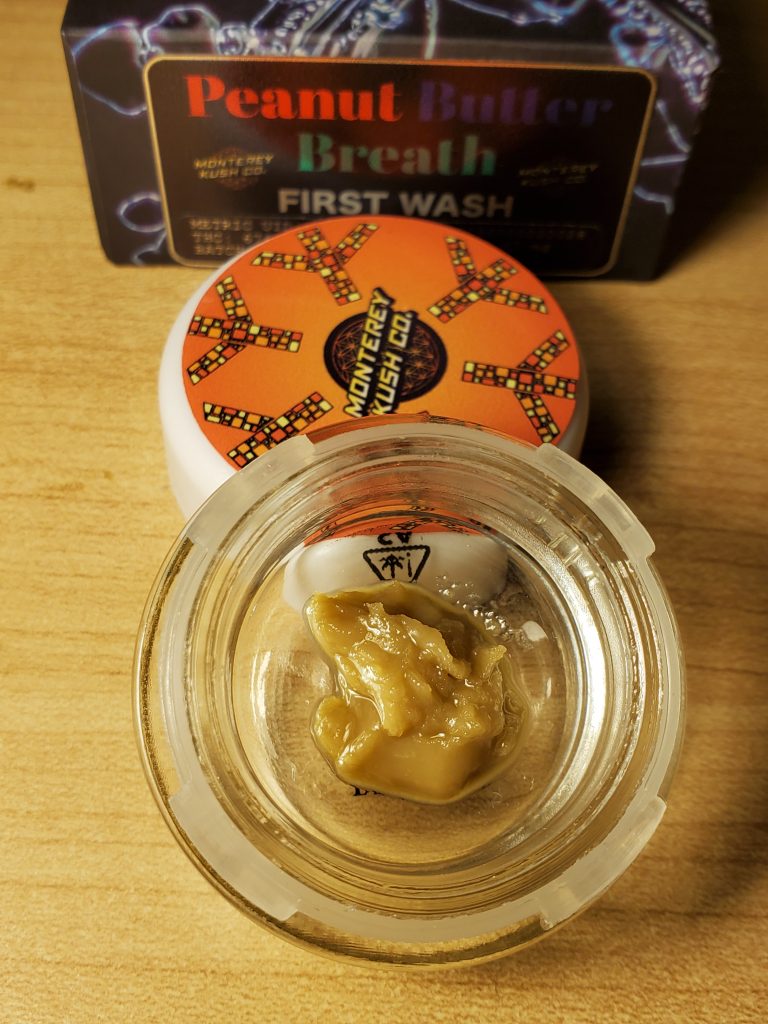 Not quite as tasty as Feeling Frosty cold cure hash rosin

Compared to other hash rosins, the quality of West Coast Cure hash rosin would rank near the quality of the live rosin batter from Cali Stripe Concentrates and the Golden State Banana hash rosin from Kalya Extracts. Between this and Feeling Frosty, I would slightly prefer the tastier Feeling Frosty cold cure hash rosin over this WCC hash rosin. I also preferred WCC Cookies N Cream for its potency, Tropical Storm for its taste, and Strawberry Bananza fresh press for its smooth yet malleable consistency. 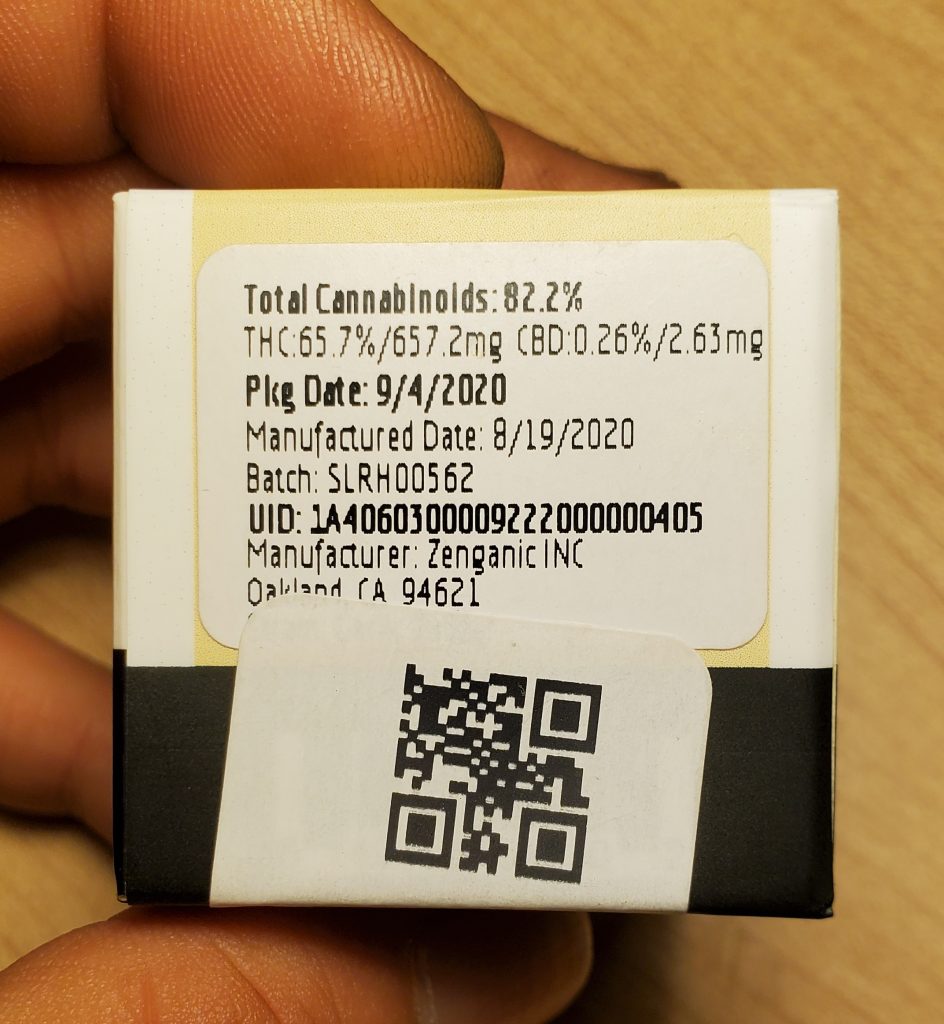 West Coast Cure hash rosin is reasonably priced near the live rosin concentrates from Cali Stripe Concentrates and some of the live rosins from Kalya Extracts. It is not quite as expensive as Feeling Frosty or Rosin Tech Labs, but it is almost as potent for a more reasonable price. In comparison to other live rosins, this is a slightly more affordable choice, so it’s absolutely worth the price. I would recommend both West Coast Cure cold cure and fresh press for its quality, potency/effects, and value. THC % is 65.7% and the total cannabinoid % is 82.2%. This hash rosin had enough potent entourage effects to eliminate many symptoms of nerve pain, muscle spasms, and insomnia.

In conclusion, their underrated selection of live resin/hash rosin is easily their best product from their line-up, which includes cartridges, pre-rolls, and flower eighths. Overall, I think I preferred their Cookies N Cream hash rosin for its potency. Tropical Storm hash rosin has the best taste and Strawberry Bananza fresh press best consistency. I would also recommend Garlic Budder because of its high potency, its desired effects, and its unique taste. I would highly recommend their underrated selection of concentrates, which seems to be overlooked when discussing any of their products. Most West Coast Cure products are currently available in most dispensaries throughout California.