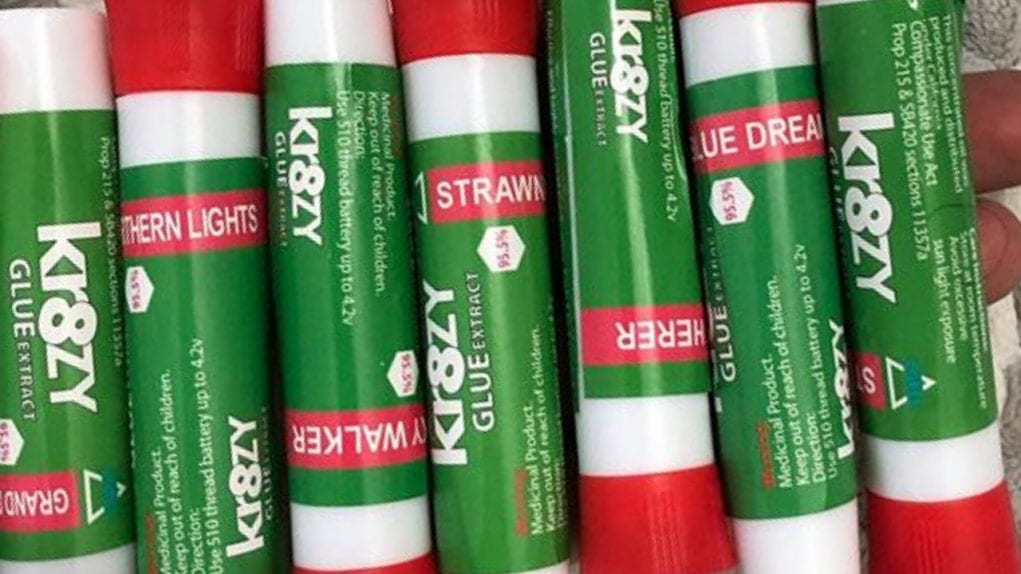 “Kr8zy Glue” is a distinctive street brand of THC vape pen cartridge we see around a lot. Many people ask “Are Kr8zy Glue carts real?” As one might guess from the title of our post today, the answer is “no.” You’d have to be “Kr8zy” to vape one.

When we investigate black market cart brands, we try to focus on the ones in live trade at the time. We don’t want to waste precious page space here talking about an extinct brand that died after a month. In the case of Kr8zy Glue, we see lots of activity.

Now, health risks in black market carts via the usual problems is one thing, but that last post brings up a very different concern. This is that people who fill street carts could be using something not derived from cannabis at all. Some responses there guess that the poster’s cart might contain K2.

The Reddit posts about this mystery brand go on for pages. Which is a mystery on its own for a brand with no apparent point of origin.

We have to wonder where the logic is in imitating a brand of industrial adhesive which itself has high toxicity, but then logic is always in short supply in black-market-cart-land.

We also found this cryptic video on YouTube labeled “Kr8zy extract carts” but just flashing a cart labeled “K8” without even hitting it. So a comment asked if it was any good and the channel owner replies in the affirmative, but “it’s better on low temp on battery cuz I smoked it on high after it start tasting like plastic.” See our K2 section below!

Kr8zy Glue is so sketchy, we can’t even find a street source!

Normally with black market cart brands we end up at one of several Instagram channels all claiming to be the “real” company and posting doctored lab tests. Not so with “Kr8zy”! Searching for the obvious substitution, “krazy glue,” will naturally turn up thousands of false positives having to do with the actual glue.

One thing is certain: There is no company behind this black market brand. No license, no website, no certification, no owner even claimed. If it weren’t for the dozens of people finding and asking about them, we’d never know they existed. We can’t even find out where the packaging is being sold online, nor can we even find the usual online black market website advertising the filled carts for sale. They appear to be distributed entirely by hand and word-of-mouth.

So we have a complete ghost cart brand on our hands. The fact that virtually every report ties it to New York City or 1Match tells us it’s a local street operation there that was maybe also responsible for 1Match?

Well, if all we can do is guess about Kr8zy Glue, you sure know you shouldn’t be vaping it.

K2 is an overlooked danger of street carts

K2 is a synthetic cannabinoid which was making the rounds before marijuana legalization gained support in the US. It was an attempt to make a synthetic substitute for cannabis, one which would dodge around legality. Unfortunately, there was an epidemic of deaths and hospitalizations from synthetic cannabinoids that have been forgotten now.

On the whole, it was bad news and you don’t see it much any more. But if somebody had some laying around, it would doubtless be cheaper than actual cannabis extract…

Unlicensed, unregulated brands like Kr8zy Glue may contain anything

There is a deadly epidemic of lung illness tied to black market cart usage. Vaping-associated pulmonary injury has so far claimed 55 lives and hospitalized more than 2.5K users. Unregulated vape carts could contain heavy metals like lead, pesticides, cut such as Honey Cut, or simply bunk. Or they could be fire if you’re lucky. But a lot of people in the hospital right now weren’t lucky.