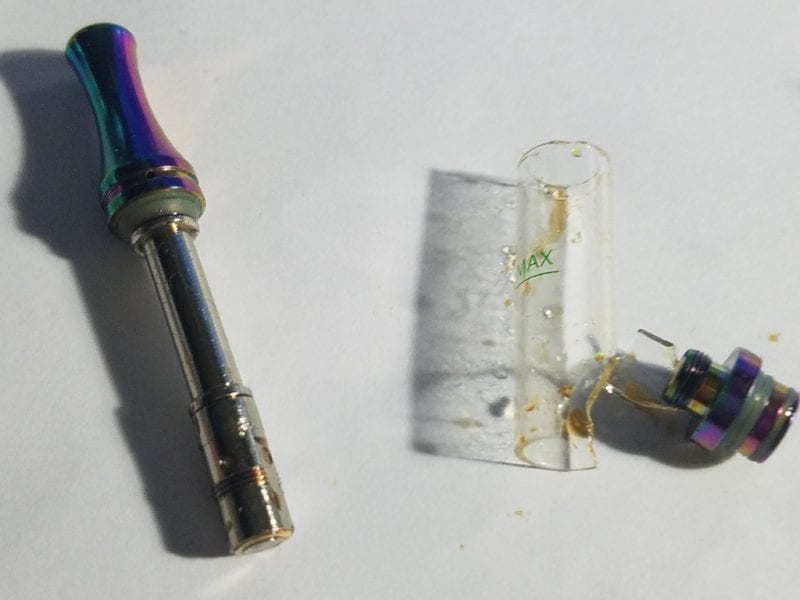 CBDFive vape kits are manufactured in China in-house by the company itself. Claiming to have worked with prior “big names” in the industry, they exclusively create vape kits. Today we will be looking at their CBDFive vape pen and seeing if it holds up well to the competition or not.

Recommendations: Properly tempered glass or temperature resistant hardened resins would make this something I could actually recommend, as it is now I honestly could not at all as it is simply too fragile. As well, the smaller cart claims to use “ceramic components” but upon close inspection, much of it appears to be plastic. Something I really don’t want near a ceramic heating element. Also, the electrical contact for the cart to the battery is a loose piece of copper wire, easily bent or broken off and intensely unprofessional in appearance.

Fix all of these things and that would be a step in the right direction. I would also recommend not using cheap felted card stock for the internal packaging, high quality card stock would give a much better use.

Getting rid of the aromatherapy markings would also help the packaging. A company claiming it is safe means nothing with that. As it stands it reeks of cut corners and profiteering on those not paying attention to details.

CBDFive aims to bring CBD to the masses

Do they manage it? They don’t need to. This statement is pure marketing as is this entire vape kit. I tried to give it the benefit of the doubt as much as I could but I can’t help being highly critical of it with all of its glaring flaws.

Right from the outset before even getting the vape kit open there is obvious corner cutting visible. On the back of the packaging is text that reads, “Only intended for aromatherapy use.” This is an immediate red flag. The cardboard is also cheap and not damage resistant. Inside the box the vape pen is inside cardstock and felt.

Flashy, but does the CBDFive vape pen have substance?

The visual design of the pen itself is quite eye catching and at least is the one thing it has going for it. It has an aesthetically well done rainbow metal finish. The refillable cart’s finish looks the same. The power/mode button is a slightly recessed hexagon. This makes it impact resistant, ironically. A bright LED that changes color with the power mode surrounds it. I immediately noticed something a bit off with the smaller of the two carts. The element housing inside is white plastic instead of the usual metal. This is where things immediately start to come apart.

Plastic on the inside of the CBDFive cartridge

Once I opened the package and looked in on the workings of the CBDFive vape pen I noticed that the smaller of the two carts appeared to be primarily plastic in construction. It is both quite light for its size and the white sections have a slight plasticity, certainly not ceramic despite its claims. The contact for this cart is also a simple bit of copper wire hanging down to touch the battery contact. This is an easily damaged critical piece, openly exposed. Not to mention it just looks generally unprofessional. The larger of the two carts is of a common design and it has a poorly painted fill line.

Upon filling them both up there was a clear difference in the performance of the two. The larger cart hit very inconsistently and often very weakly, even with preheating before each hit. The smaller cart hits much more consistently and heavily, but I was never able to shake my unease about the very apparent plastic components.

I immediately noticed that the feeling of the glass on both carts is not quite right. The texture is that of improperly or untempered glass, with a distinctly fragile and rigid feeling rather than a smooth and robust feeling like that on a cart by CCELL. It appears thinner than what’s common in the industry. I wrote this off initially.

The scene of the disaster… CBDFive cart breaks

While out in the backyard working I was carrying the pen with me and dropped my hand to my side, hitting the chamber of the larger cart. I immediately heard a loud pop but didn’t think it was anything, I figured it was a rock under my shoe. That all changed when I lifted the pen to take a hit and immediately noticed a spiderweb of cracks now across my half-used cart.

I quickly brought it inside and attempted to save the oil by draining it out. While handling it to attempt doing so it literally disintegrated in my hands, leaving a huge hole in the chamber. Truly disastrous. I was not expecting my hand to break the glass nor have all the glass crumble after, making it impossible for me to recover the oil.

I want to give this vape pen a fair shake and see how it performs, but I’m just very disappointed. It’s component quality is questionable at best, bad at worst, and my attempts to reach their customer service for comment went totally unanswered. I cannot recommend this vape kit to anyone, there are far better options out there for any price point. Maybe if they clean up their act they may have a chance but they don’t look to be in great shape at the moment.