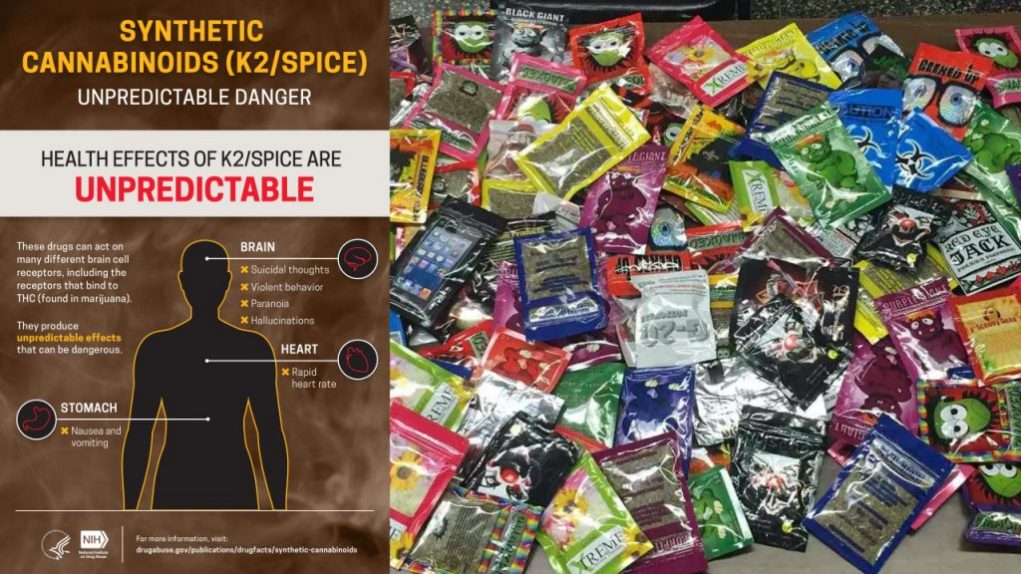 Synthetic cannabinoids are a class of artificially created compounds created to mimic the compounds found within the natural cannabis plant, with unsuccessful results. These molecules bind to the same receptors in the body’s endocannabinoid system, intended to mimic the effects of cannabis and its derivatives as closely as possible. They are classified as “designer drugs,” sometimes sprayed onto otherwise harmless plant matter, even natural hemp, as an enhancer or even directed to be taken as a stand-alone drug. 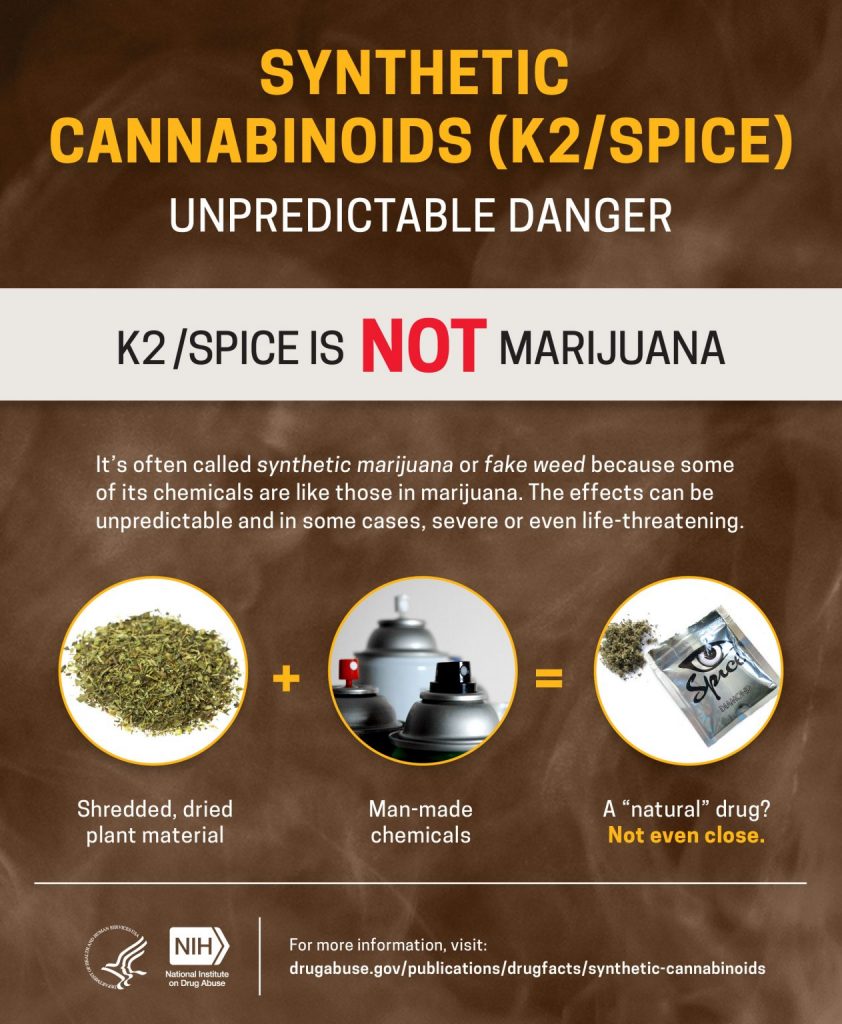 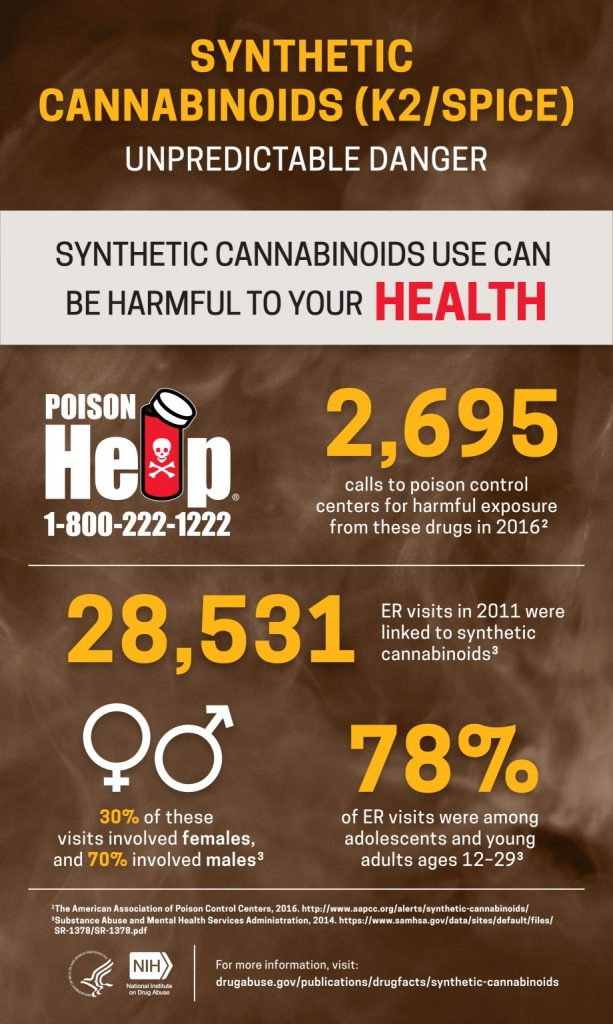 Every synthetic cannabinoid we have found so far has bad effects!

There are hundreds of these chemicals milling about on the market now. In general, the most common side effects reported from synthetic cannabinoids are:

“Users of the synthetic mixtures can never be certain in which ways the drugs will harm them, but users have experienced symptoms that include renal failure, arrested heart rate, high blood pressure, loss of consciousness, violent behavior, nausea, vomiting, tremors, seizures, hallucinations, paranoia, agitation, anxiety, and even death. These effects can be similar to those of phencyclidine, or PCP.”

One consistent pattern is the effect synthetic cannabinoids have on the mind. Psychosis is a very common side effect, persisting for weeks and even months in some cases from a single dose. These psychosis symptoms tend to include suicidality, affective symptoms, self-injury, catatonic features, and/or Capgras syndrome. Many a synthetic cannabis experiment has ended in psychiatric hospitalization.

The issue with synthetic cannabinoids is that chemistry is just never that simple. Consider the case of THC and delta 8 THC, two otherwise identical molecules differing (in layman’s terms) only in the way the atoms bond. Yet they have vastly different effects, with delta 8 THC being far less potent than THC “classic.” That just goes for an example of how hard it is to predict the effects of any particular molecule. 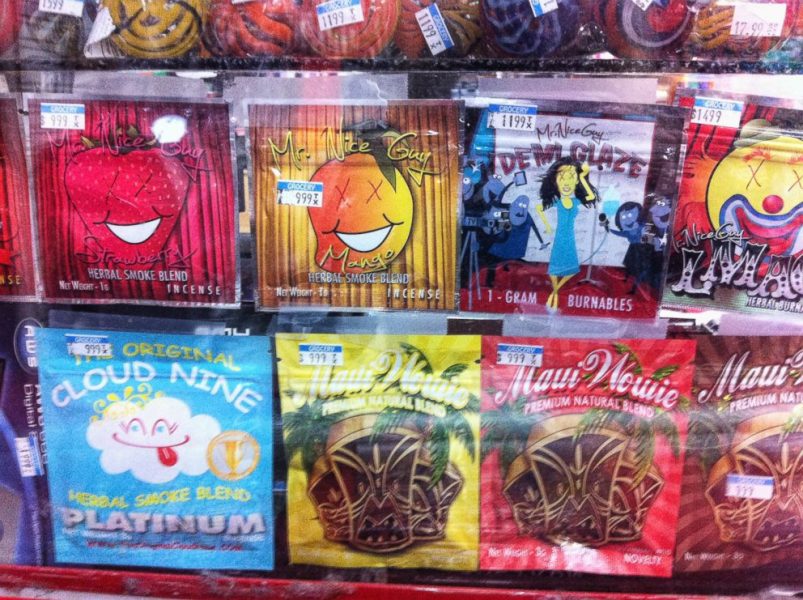 Synthetic cannabinoids came out slightly before cannabis started to be legalized

The most common form of marketing synthetic cannabinoids were under the brand names “K2,” “Spice,” or simply “synthetic marijuana.” Sometimes, to dodge drug control laws, they were sold as “incense” or “bath salts.” They continue to be sold internationally, wherever the laws or enforcement of same tend to be most flexible. In many cases they are identified as “all natural,” because the chemicals are sprayed onto natural plant matter. They are also typically labeled as “not for human consumption.”

Some synthetic cannabinoids have their origin as intended for usage in laboratory testing, since they bind to the same receptors. But most are simply brewed up in garage and basement laboratories similar to how drugs like LSD and methamphetamine are produced.

Since none of these substances are legalized in any way, there is absolutely no control over how they are produced. Likewise, black market cannabis products are also produced and distributed outside of legal standards and control. In one case, in Illinois in 2018, synthetic weed was passed off as the real thing resulting in dozens of cases of injury and two deaths. We have also seen one recent case of a fake Connoisseur Concentrates cartridge which was lab tested and found to be laced with synthetic cannabinoids, sending its user to the mental ward with psychotic symptoms.

Black market cannabis products are invariably a dirty business, resulting in thousands of hospitalizations and dozens of deaths from fake cartridges containing any number of contaminants. Synthetic designer drugs are just one more reason to avoid this hazard and only use products from a licensed dispensary selling lab-tested products.