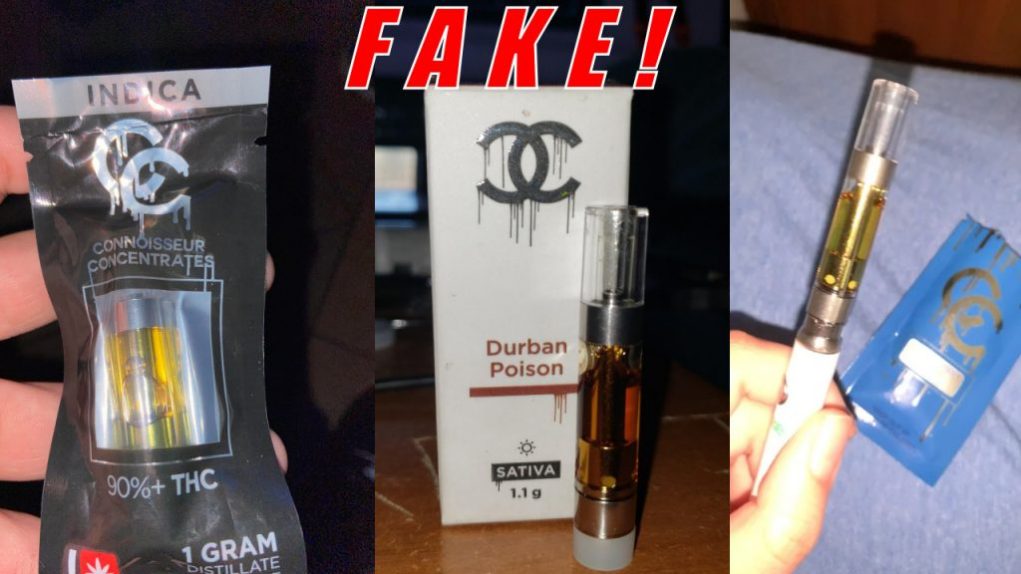 There seems to be a general rule in the black market cartridge community that there is always one “brand” of fake cart which has a variation on a linked “CC” logo. Recall our old post on California Confidential, another fake brand which uses the linked “CC” logo in its packaging.

Most fake cart logos that have a motif of linked letter C’s usually resemble the logo of famous French fashion and perfume brand Chanel. And here is what Connoisseur Concentrates’ branding looks like: 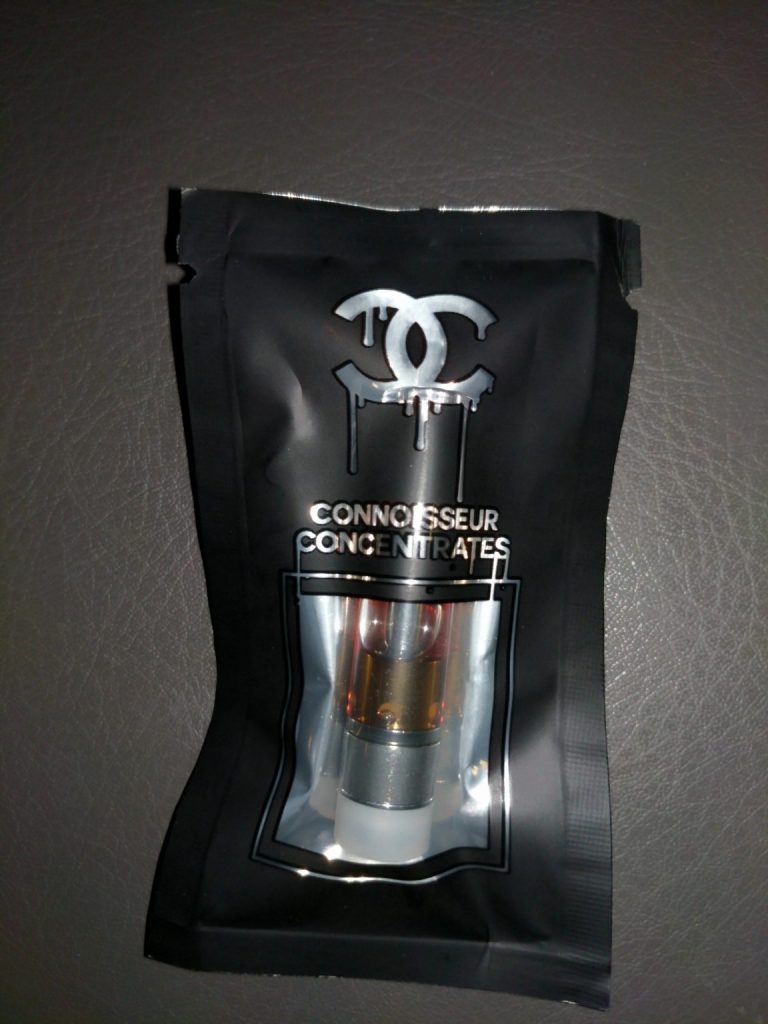 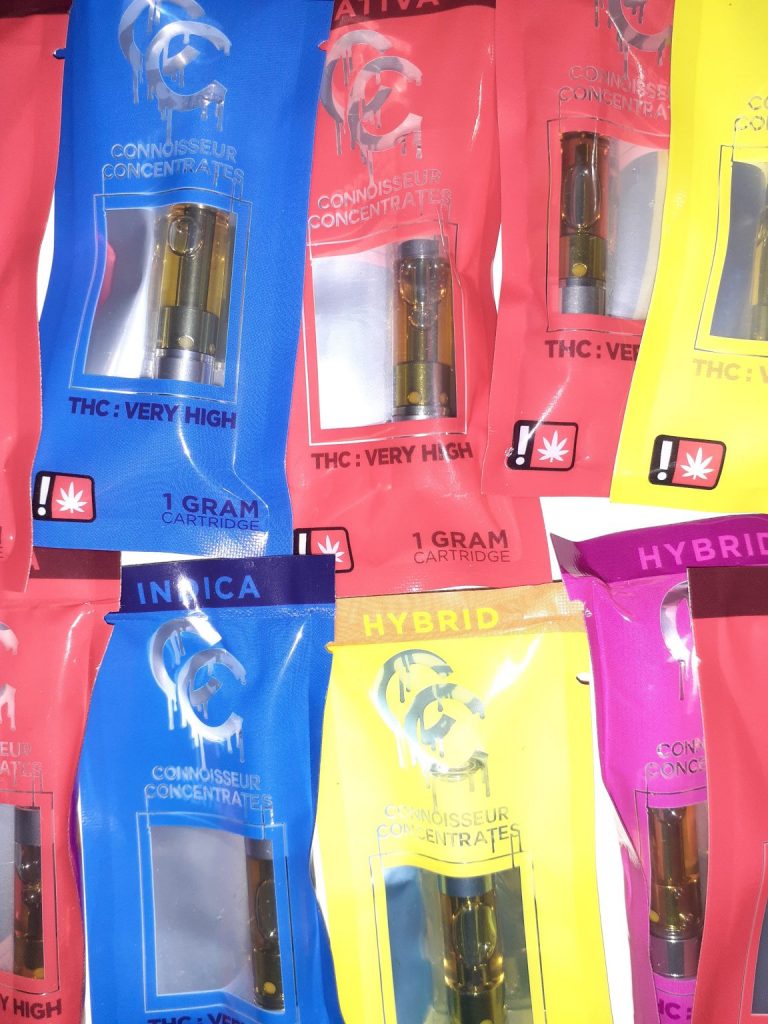 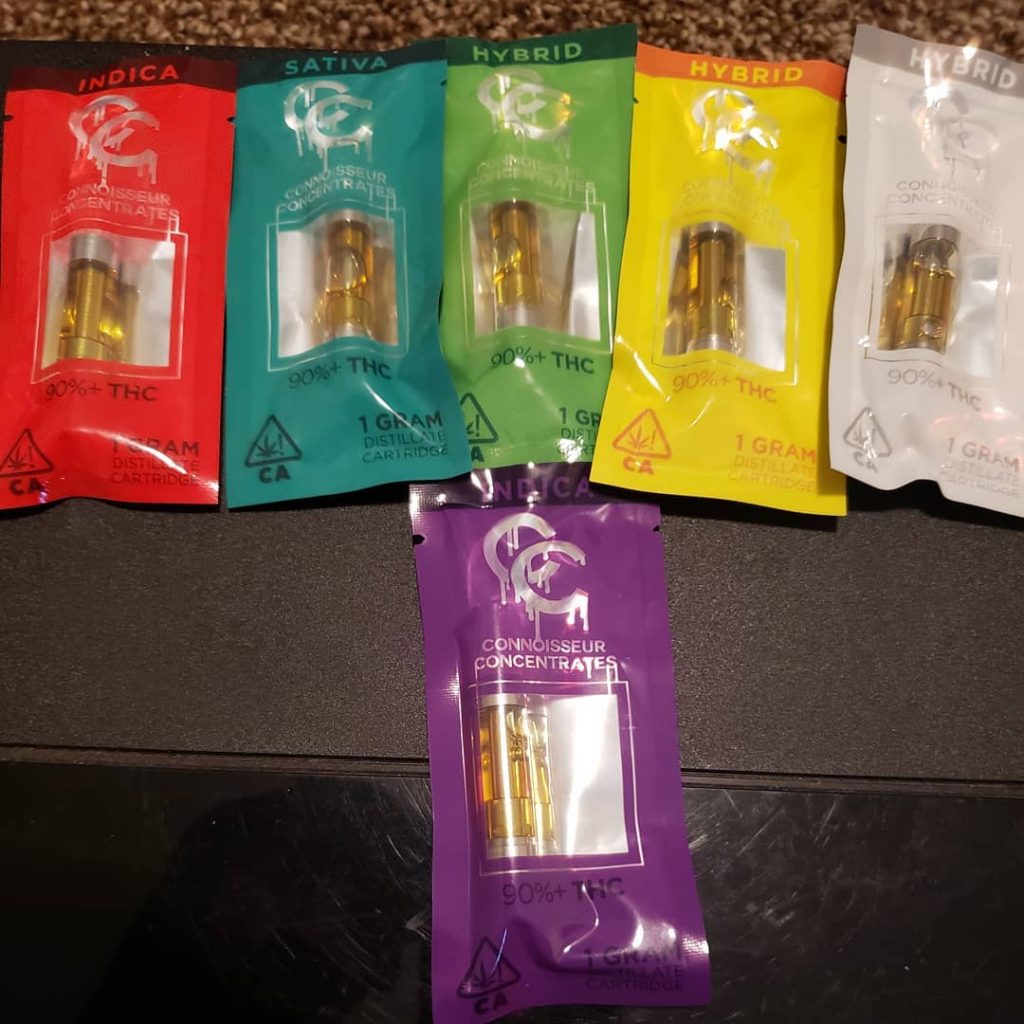 While this “brand” is tough to find on bulk vape packaging sites, it is very obviously being cranked out with no central source, because there are numerous designs to the packaging. Our guess: There’s always a “CC” vape package out there, and new distributors just make up whatever words they want “CC” to mean.

On Instagram, we also find yet more variant packages for carts of the same name, this time tagged “Detroit.” First here’s a copy of the same linked-CC logo: 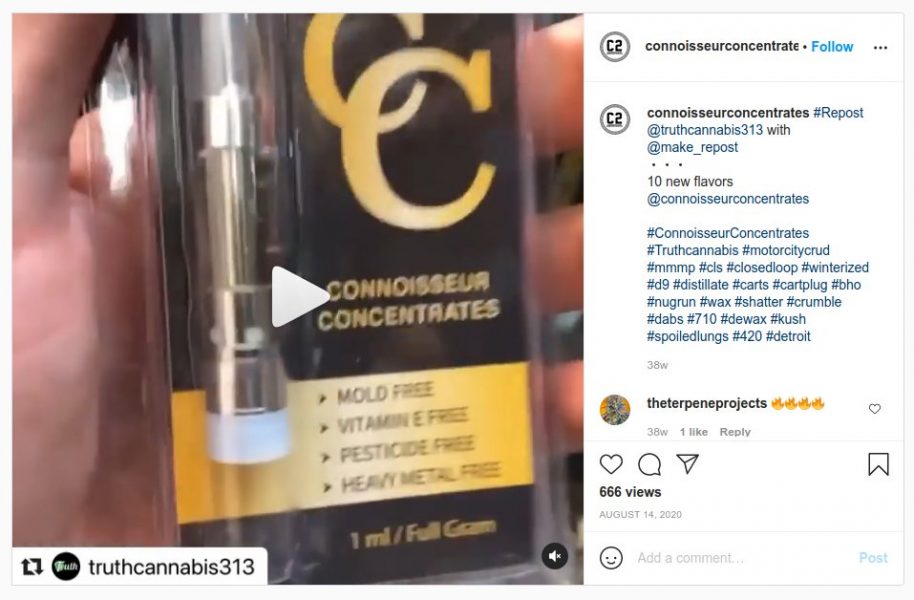 Note the same logo, but a plastic shell package instead of the plastic bags. And then the same Instagram account posts Connoisseur Concentrates carts with a cardboard box upgrade and a changed design, finally dropping the linked-CC logo: 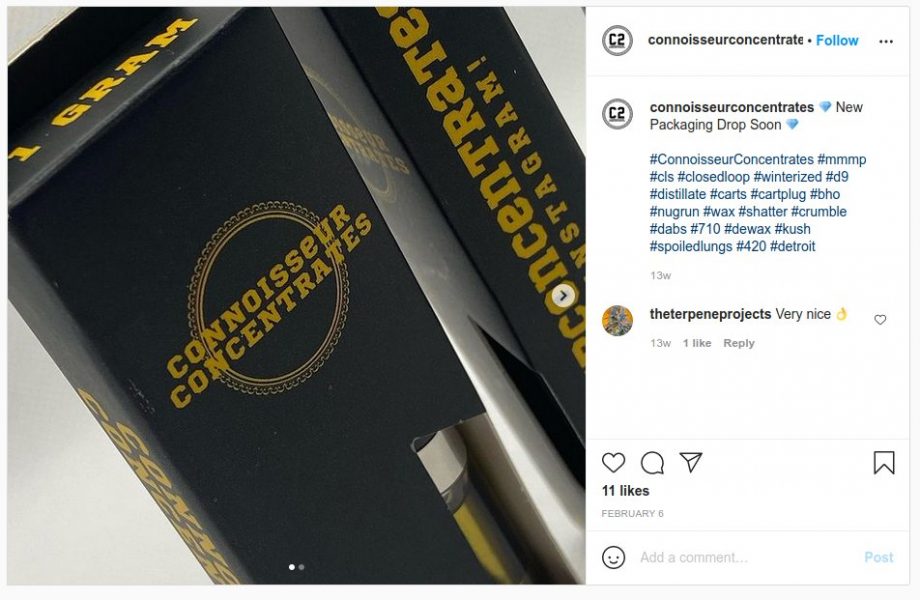 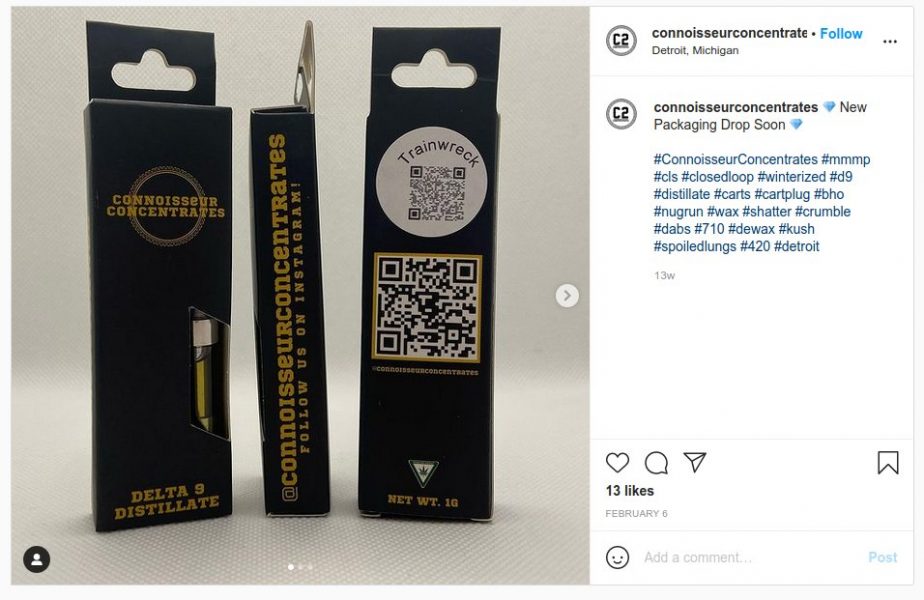 Connoisseur Concentrates is not to be confused with the terpene company

There is also a terpene distributor called “Connoisseur Concentrates” too. We don’t find much on them except this Facebook page and a name that will give you all flashbacks: Mr. Extractor. If that name doesn’t ring a bell, take in this story for a refresher: 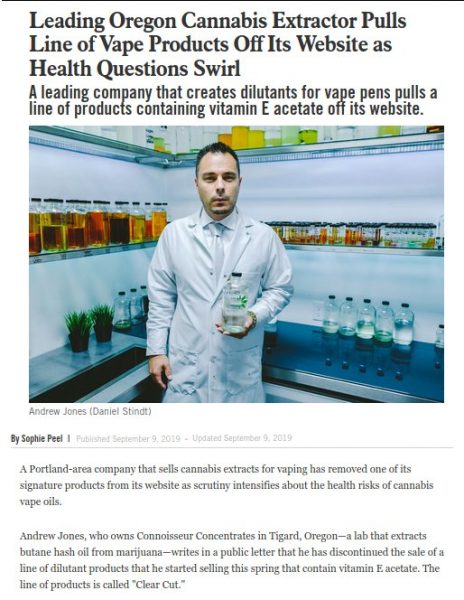 So “Mr. Extractor” was one of the original producers of vape cart dilutant products containing vitamin E acetate, name of “Clear Cut.” And his BHO lab was also named “Connoisseur Concentrates” in Tigard, Oregon. So these days he seems to have shifted focus to producing terpenes only.

Is there a possible connection between that story and this fake cart brand? I doubt it, but somebody might have settled on the name to ride on the fame of Mr. Extractor.

The Austin, Texas case we mentioned up top says that the concerned parent of the vape cart victim tested the carts at a lab and the results came back showing contamination from AM-694. This is a designer drug which is a selective agonist for the cannabinoid receptor CB1, and is used in scientific research to map CB1 receptors. It is clearly not intended to be vaped, and we’ve never heard of a case using AM-694 before. However, there have been past reported cases of carts contaminated with K2/Spice among other contaminants, so somebody might have been looking to cut corners with yet another synthetic cannabinoid.

For AM-694, the toxic report doesn’t look good, causing “terrifying hallucinations,” “schizophrenic-like behavior,” and “damage to cell membranes.” AM-694 sounds like bad news, and yet another bad thing in boof vape carts that can kill you. For the record, there are hundreds of “designer drugs” out there used as research chemicals, any one of which might be the next vape cart contaminant.

Quite a few posts are also by enthusiastic users who happened to get lucky and get a fire cart without AM-694 contamination. It just goes to show, it’s all a lottery!

There is one consistent user who pops up every time the name Connoisseur Concentrates comes up. That is user /u/CCcartsco, who claims credit for making these carts and claims they are single-sourced by them. That doesn’t seem likely considering that we find so many different variations of the same brand name as packaging. 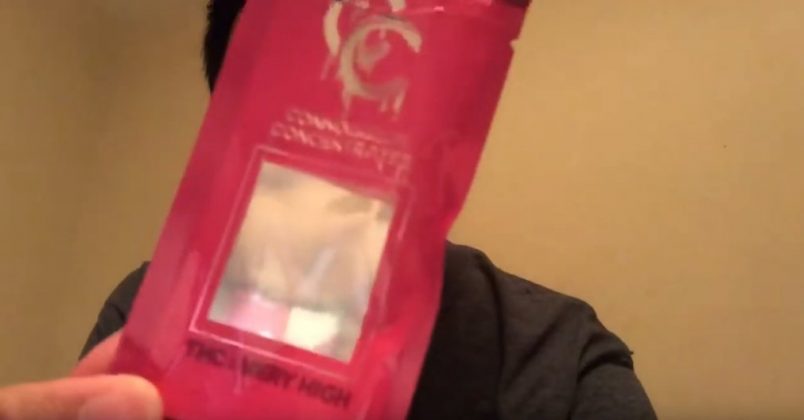 Not to mention, of course, no license! In any case, that Reddit user’s word is as good as a ghost, since they could be merely a street plug talking up the carts they’re moving, or one of many claimants to owning the brand name. Here’s another guy on LeafedOut hawking them from Harris, Texas, so who’s to say he’s not the “owner”? Since we have a logo which will never be legally defensible if the Chanel company has anything to say about it, it’s doubtful that it ever would be legit. 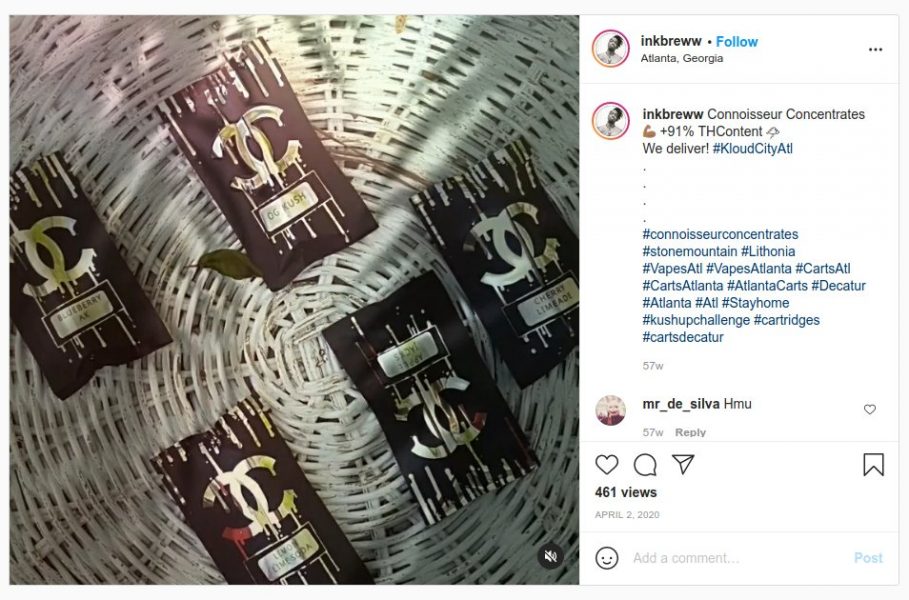 We don’t scream about “licenses” around here just for the workout. We’re not enthusiastic supporters of government bureaucracy. We’re not just meanies out to get random people.

Licenses have a function:

We literally have a classic “tragedy of the commons” problem here. How do you all think the end of alcohol prohibition would have gone if poisoned alcohol had grown to be a worse problem after they invented it? All the boof cart people, buying and selling, are trashing the legalization we have fought so hard for for generations, before it can even gain a foothold.

Well, here come the comments. Readers, where else are you seeing Connoisseur Concentrates? Let us know here or in our forum.