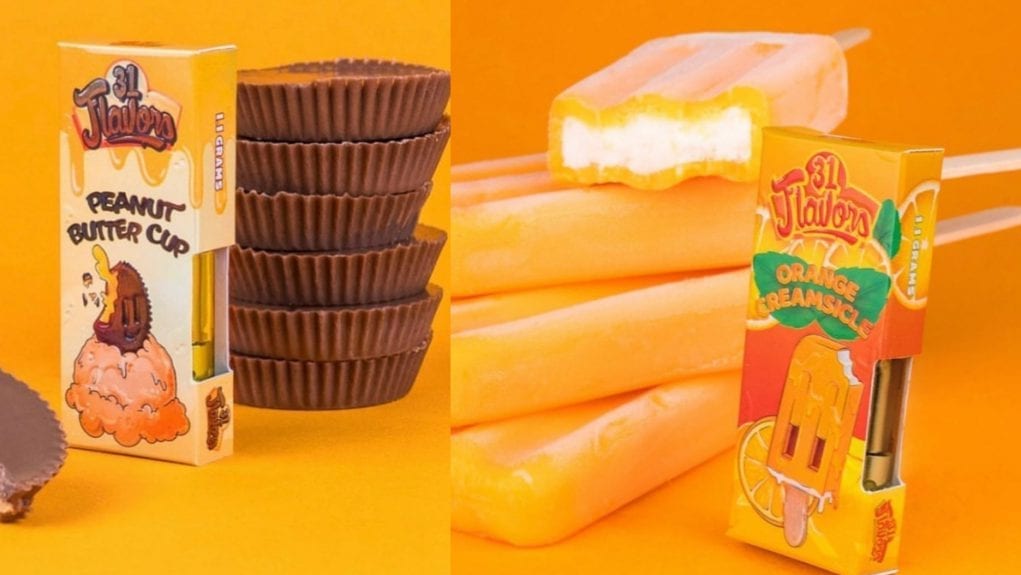 In our most recent check-up on the list of unregulated cartridges brands, we’ve explored 31 Flavors, sometimes known as just “31 Carts.” We found nothing but mystery: No company, no website, no license, no registration, no lab tests, nothing.

One dead giveaway for black market cart brands is competing Instagrams. There’s a “31 Flavors Official,” and then the set-to-private “_31_flavors_.” Even though that second one claims “ExoticFarms,” that leads nowhere except right back to the 31 Flavors account, unless you count other channels associated with the equally-boof Exotic Carts.

There’s a huge variety of 31 Flavors, all unlicensed

But somebody definitely went to a lot of time and trouble to put together attractive box shots set against representative food items. There might be more than 31, we’re not counting.

By standards set by California Department of Public Health, and an example followed in most states, THC vape cart packaging shall not contain “cartoons, images popularly used to advertise to children, or imitating candy labeling.”

So even disregarding the Nabisco-owned Oreo branding, these carts are clearly made to appeal to children. The brand name itself is famously the slogan of an ice cream retail chain. Out of the 47 deaths so far from the epidemic of vaping-related lung illness, the youngest was aged 17, so this is a point that bears mentioning.

Several users are asking about these in the past few months

As the proverbial “birds of a feather,” bootleg cart brands tend to clump together in the same places.That last Reddit thread shows a photo of 31 Flavors right next to packages of Dank, the most infamous of black market brands.

On the topic of Reddit… We all know the black market epidemic is frustrating, but we’d please ask the dab community not to flame at people just for asking? We’ve only had bunk THC oil cart brands around for a couple years now. There’s still a lot of people who don’t know. Just be nice about it, pretty please, just for us?

One of them is literally a channel named “iSmokeUnlicensedCarts.” Last video seen on this channel two weeks ago with tens of videos posted, so our prayers are with him. This other channel doesn’t seem to know that 31 Flavors are unlicensed.

Unlicensed, unregulated brands like 31 Flavors may have anything in them

They could contain heavy metals like lead, pesticides, cut such as Honey Cut, or simply bunk. Or they could be fire if you’re lucky. But a lot of people in the hospital right now weren’t lucky.