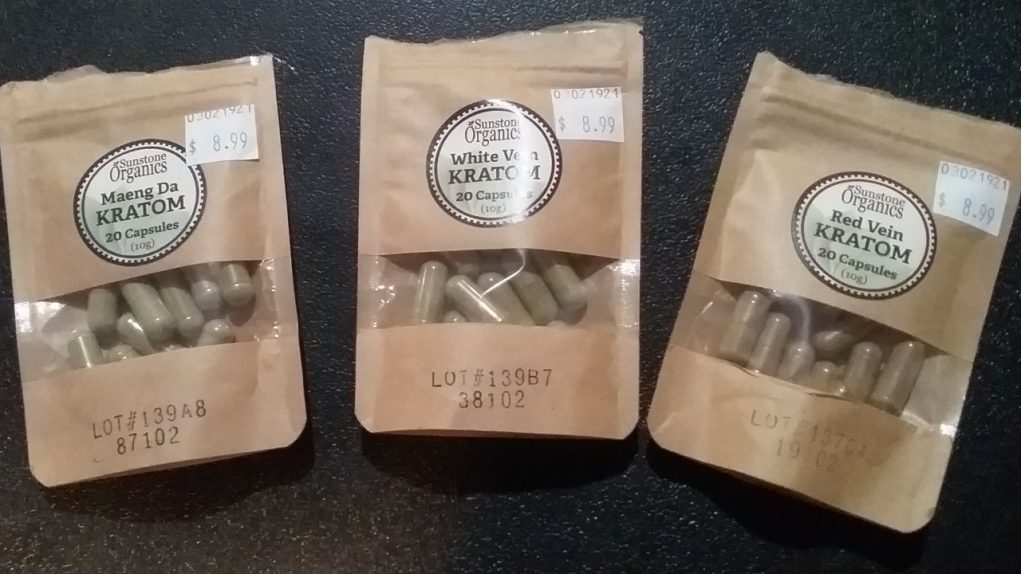 Today we dip into the kratom craze and try to find out what it’s all about. We here at Dab Connection try to cover every base, so when we noticed packaged commercial kratom lurking out in the corners of the cannabis beat, we decided to give it a try. Your Present Author, eager for an adventure not had since the experimentation of youth, was first in line to be a guinea pig for this novel drug.

Disclaimer: I’d never tried kratom before. Weeaboo that I am, I have explored other pseudo-legal allegedly psychoactive herbal substances from the Orient. I found Korean ginseng to be a mild and unassuming stimulant at best, and tried unsuccessfully to see what the fuss around betel nuts was all about. Kratom would leave me similarly unimpressed.

Kratom is the leaf of the Mitragyna speciosa, a tropical plant in the same family as coffee. It is native to southeast Asia and is widely consumed in Thailand. It is used as a pain treatment, a treatment for opioid withdrawal, and is also allegedly a recreational drug in its own right. 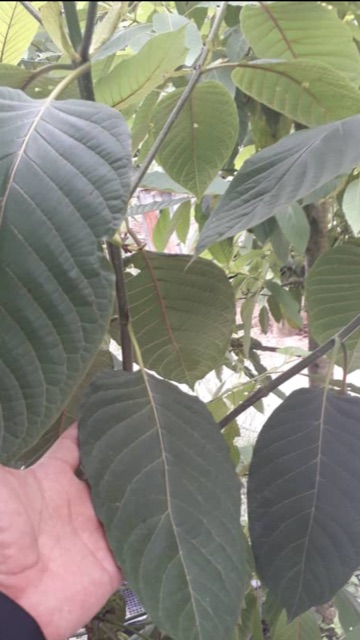 There’s a huge advocacy push for this stuff over at American Kratom. The US FDA does not approve the use of kratom for anything, and the US DEA briefly classified kratom as a Schedule 1 drug before reneging on the Controlled Substances list, right alongside heroin, PCP, and our old friend cannabis. A write-in protest and bipartisan actions by US House representatives stayed the DEA’s hand, but it’s reportedly still ruminating the issue. 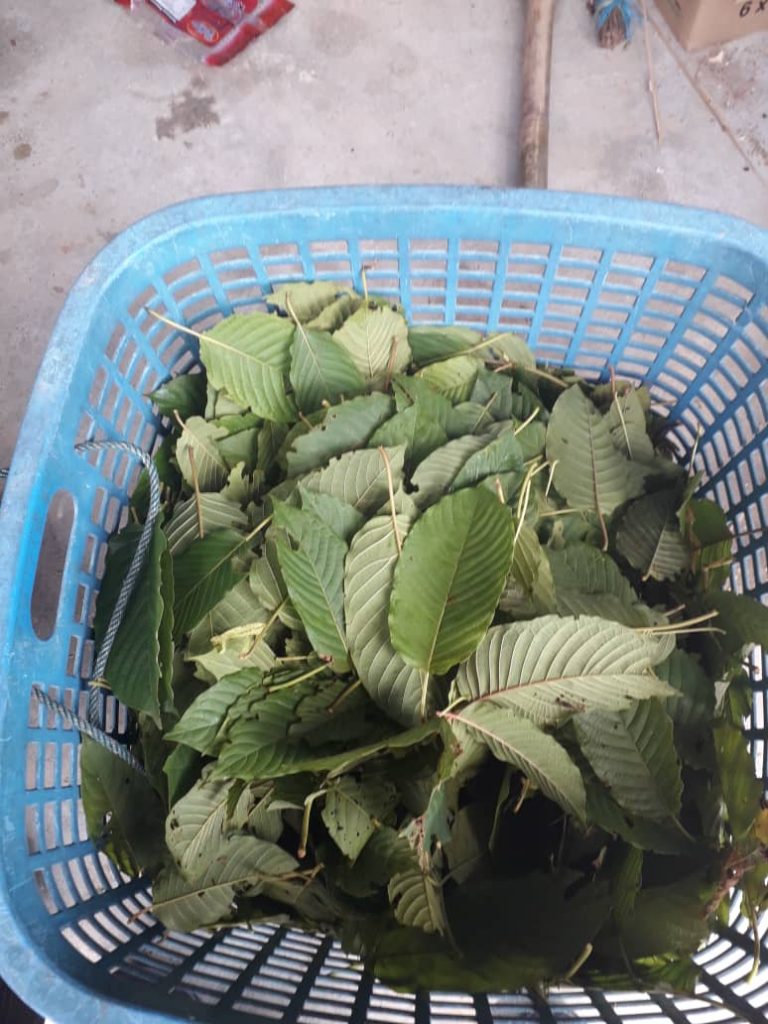 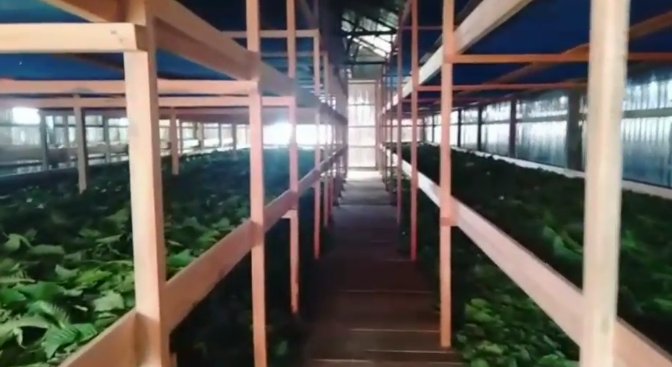 Kratom comes in various strains which are all touted to have separate effects (more on that later!), so I was confronted by a menagerie of different packaging at the store counter, in both capsule and powder form. I blindly picked the capsules of strains Sunstone Organics Maeng Da, White Vein, and Red Vein, in baggies of 20 half-gram capsules at about $9 each. I figured that might give me a balanced overview. I nicked a business card off the display for later reference. I went home, took a deep breath, and plunged into my new drug adventure.

If you look up the claims about kratom, it’s supposed to have euphoric effects “like coca,” and opioid effects at higher doses. It is claimed to be the most widely-used drug in Thailand. Allegedly it is even possible to overdose on the stuff, and has various negative side effects at high doses. This looked like a job for a professional psychotropic explorer such as I. 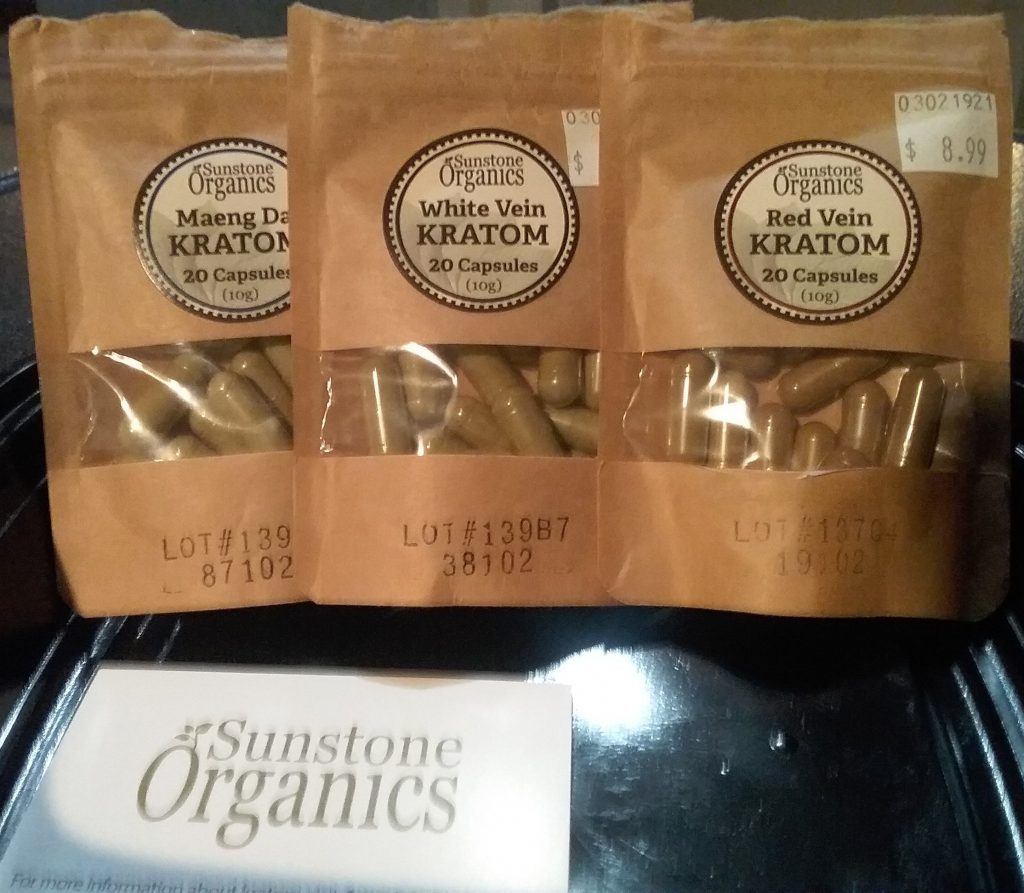 6:50PM – We all know the suspense of waiting for edibles to kick in, right? Still feeling absolutely NOTHING, took two more. 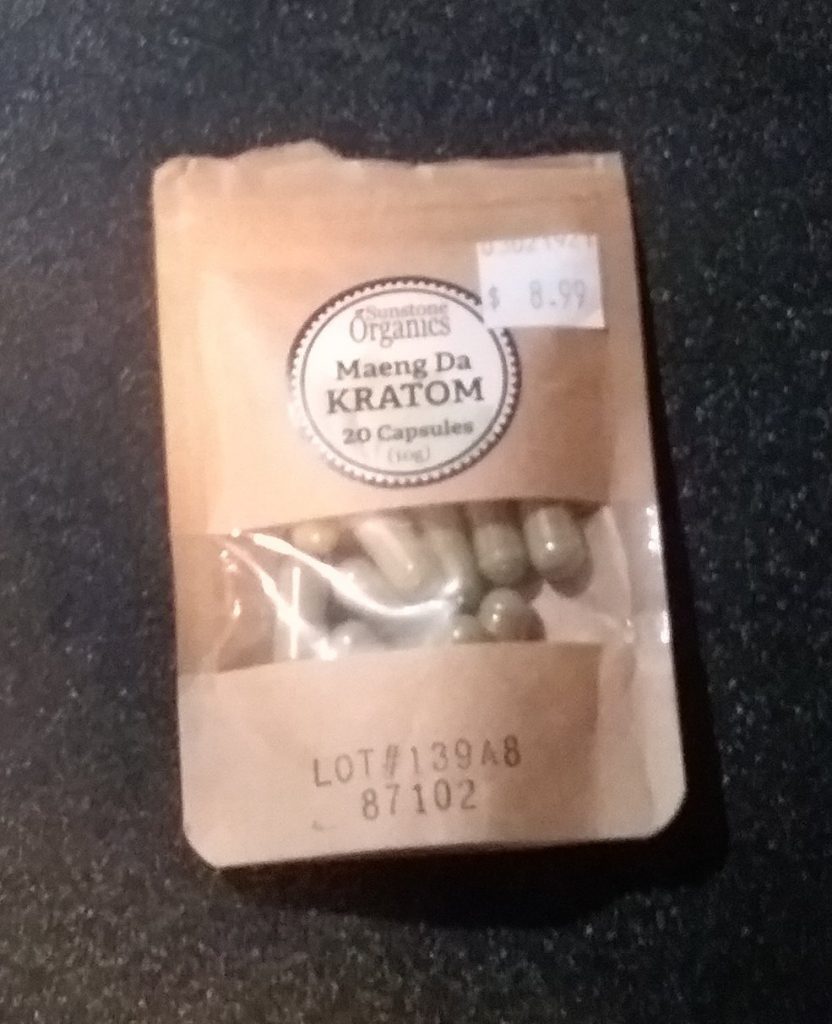 7:45PM – Wikipedia states that the effects of kratom only last from two to five hours, so the first capsules I took would be wearing off already. Not that there was anything to wear off from. I switched to White Vein, two more capsules. 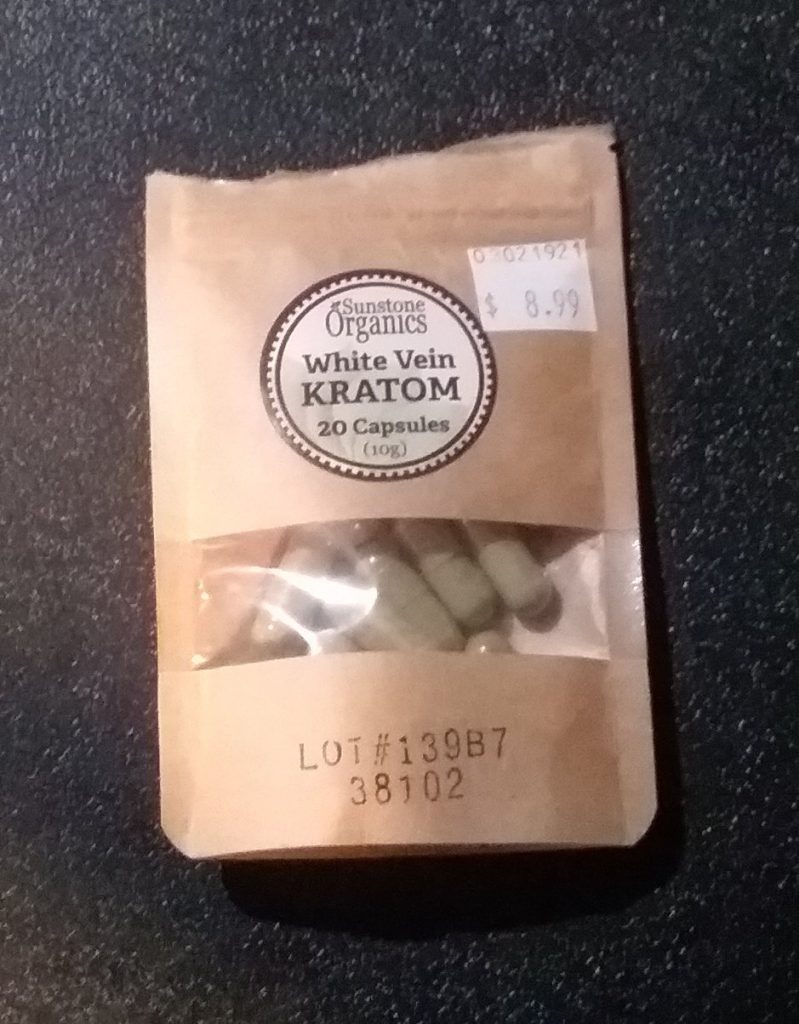 After another hour I gave up and went to bed for a fairly uneventful night’s sleep. The main thing I was feeling in my system was the can of Coke I drank to wash the pills down. Note that nowhere online do they tell you how much to take! I’d researched places like the kratom subreddit and the old classic vaults of Erowid in vain. I just generalized from others’ reports and decided to take it slow. 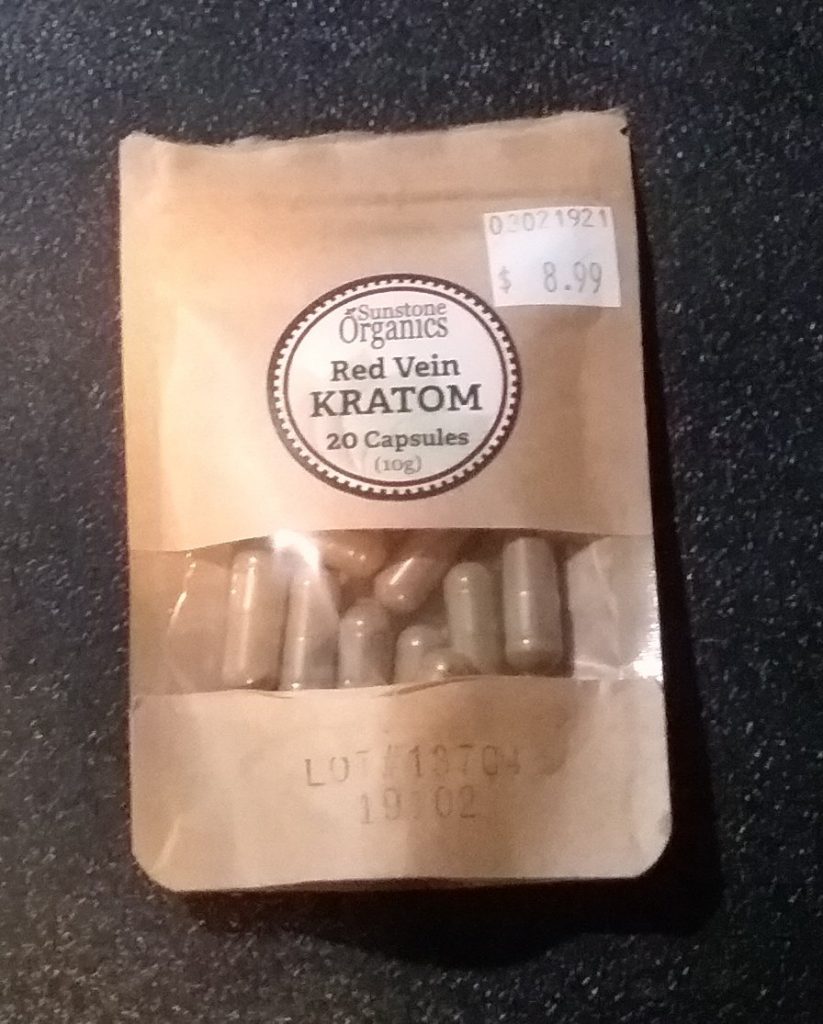 Next morning 5:00AM – I’d read up some more on kratom and decided to try a different approach. I skipped my usual morning coffee and tried kratom tea. I boiled a saucepan with 2 cups of water, opened and dumped in six capsules (3 grams) of Red Vein, strained the result through a coffee filter into a mug, and gulped the dark brown mixture down on an empty stomach. From my understanding of reading over others’ experiences, this was guaranteed to either launch me to the moon or make me barf my brains out.

I enjoyed the kratom tea with a dash of cinnamon and nutmeg, reasoning that it’s close enough to pumpkin spice season and I’d need something to combat the horrendous taste others report. I highly recommend this recipe if you want to take kratom for whatever reason. Oddly enough, it tasted exactly like a cup of tea, albeit denser.

6:00AM – Still. Feel. Nothing. In frustration I gulped down four more capsules of White Vein. This is now a total of 5 grams in my system, and for all I can tell I’ve been eating catnip.

After still feeling none of the reported effects I gave up there. The only sign that this was, in fact, an opioid I’d been ingesting was that I was affected by the notorious digestive system disruption that opioids are famous for over the course of the next day. At the most, I did experience a mild numbing around my body, exactly like I’d taken some aspirin, but even that could be a placebo effect at this point.

Now, if this drug helps other people as claimed, more power to them. I’m not going to tell anybody we should ban it. In fact, it seems to me that the FDA / DEA is panicking over exactly nothing. Not having heroin withdrawal (because that’s one drug I’ll never touch) nor being affected by chronic pain nor any of the other conditions kratom is supposed to treat, I can’t speak for its effectiveness there.

But from my experience, there’s only a few possible conclusions:

I’m inclined to believe the last item. The only news report I see about the Oregon-based Sunstone Organics is that they recalled a batch of kratom in March of 2019 due to suspected salmonella contamination, which seems like they’re at least a conscientious company.

Here’s the thing about those strains: A Redditor on a trip to Indonesia shares the story about visiting kratom farms. Among his discoveries:

The Redditor documents this trip with photos and it’s linked prominently in the sidebar of the /r/kratom subreddit, so it’s apparently accepted as truth there, although they still go on about “red vein” this and “Kali / Indo” that like they meant anything.

I found all three strains I purchased to be identical in every aspect. Same color, consistency, taste, effects.

UPDATE: In the first place, it is worth mentioning that kratom has a separate claim as an opioid addiction recovery method. That’s neither here nor there with me; I’m not about to mess around with opioids and find out! But for what it’s worth, there’s now a Kratom Legality Guide with a resource covering the state-by-state legal status of kratom and the advocacy movement. If you have a horse in this race, it’s worth checking out.

> “Is your loved one addicted to Kratom tea? A plant known for treating opioid dependency, anxiety, depression, sexual dysfunction, and multiple painful diseases, while boosting creativity and energy and improving the lives of millions of Americans, without zombie-like side effects nor harsh withdrawals.” — Sarcastic Redditor

At least one death from a car accident has been claimed by a coroner to be caused by “acute mitragynine intoxication,” mitragynine being the active ingredient in kratom.

> “Kratom is complete bullshit. I expected to be strung out like I’m in a Chinese opium den circa 1880 and all that happened is my mouth feels like I rubbed Novacaine on it and rinsed it down with matcha.” — @quantian1 on Twitter

It certainly cured any addiction I might have had to kratom.

What could be going on here?

The placebo effect and mass hysteria are both powerful psychological quirks. Psychologists have done tests where people who were given ordinary non-alcoholic beverages to drink became “drunk” because they were told they were getting alcohol. Various urban legends surround all kinds of substances alleged to be psychoactive, from smoking banana peels to jimson weed.

Again, I don’t want to cast doubt on the medical end of kratom. If people claim it helps them, fine, let them take it. People with heroin withdrawals are in a class by themselves, but looking at how many people have died from heroin, pray to the Flying Spaghetti Monster if it helps you quit.

But as a party drug? Hell nah! And if we get comments telling me I didn’t take enough or I took it wrong: If that’s the case, I could have spent the same money on a cannabis preroll and a beer and had a hell of a lot better time. Maybe they’ll get around to extracting the active ingredients in kratom and come back with a concentrated form later; call me back when that happens.