Today we will take a close look at the San Diego-based CLSICS, a brand mostly known for its solventless live rosin products. They also introduced the first solventless rosin-infused pre-rolls on the market. CLSICS currently offers live rosin cartridges, pre-rolls and concentrates in select dispensaries throughout California. Prior to this review, I had sampled and enjoyed the flavor of their Melon Ringz live rosin, so I was eager to pick up their new collaboration with Floracal Farms. For this review, I will try a couple of different strains from their collaboration with Floracal Farms.

Recommendations: The flavor for Lemon Bean could be slightly improved.

The first thing you’ll notice is that the new packaging for CLSICS live rosin. It’s different from their usual packaging. The usual packaging has an artwork image of an octopus with an egg-white background. Now, the new live rosin from Floracal Farms has a sleeker look. It has an illustration of a peacock with a black background. Each live rosin jar from CLSICS comes packaged with a white foam core in a convenient magnetic flip top box. 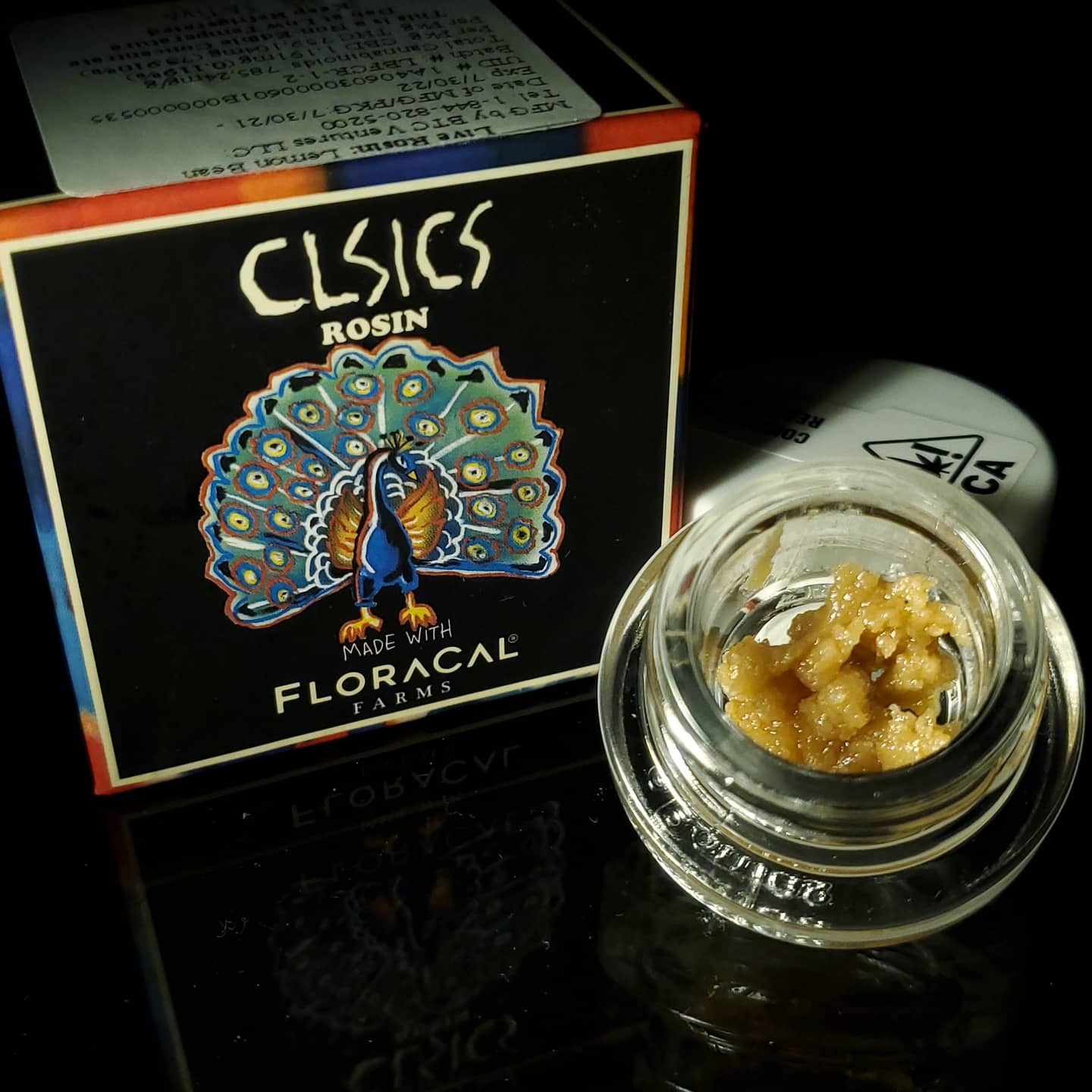 First, I tried their Lemon Bean live rosin from Floracal Farms. Lemon Bean, first bred by Dying Breed Seeds, is a Sativa dominant hybrid cross between Lemon Tree and OG Eddy Lepp. Upon first opening the jar, this Lemon Bean has a darker hue than other live rosins with a chunky peanut butter-like consistency. The aroma of Lemon Bean is sour, skunky and spicy with hints of lemon, vanilla and diesel. However, its aroma is overpowered by an unexpected whiff of burnt rubber, which translates to the flavor. Although that might be a personal preference, I found Lemon Bean slightly harsher than other similar live rosins, such as Feeling Frosty, Cali Stripe Concentrates and West Coast Cure.

Although this is categorized as a Sativa hybrid, the effects of Lemon Bean still felt mildly relaxing. Its effects felt initially energetic followed by a calm, balanced yet uplifting high. Because of its slightly harsh flavor, this tasted moderately better using a traditional glass banger. Although not much is known about Lemon Bean, its parent Lemon Tree is known to treat symptoms of chronic pain, inflammation, fatigue, and insomnia. Meanwhile, OG Eddy Lepp is known to treat symptoms of depression, loss of appetite, stress, anxiety, and even chronic pains and aches. The THC % of Lemon Bean is 75.91%, the CBD % is 0.11% and the total cannabinoid % is 78.52%. 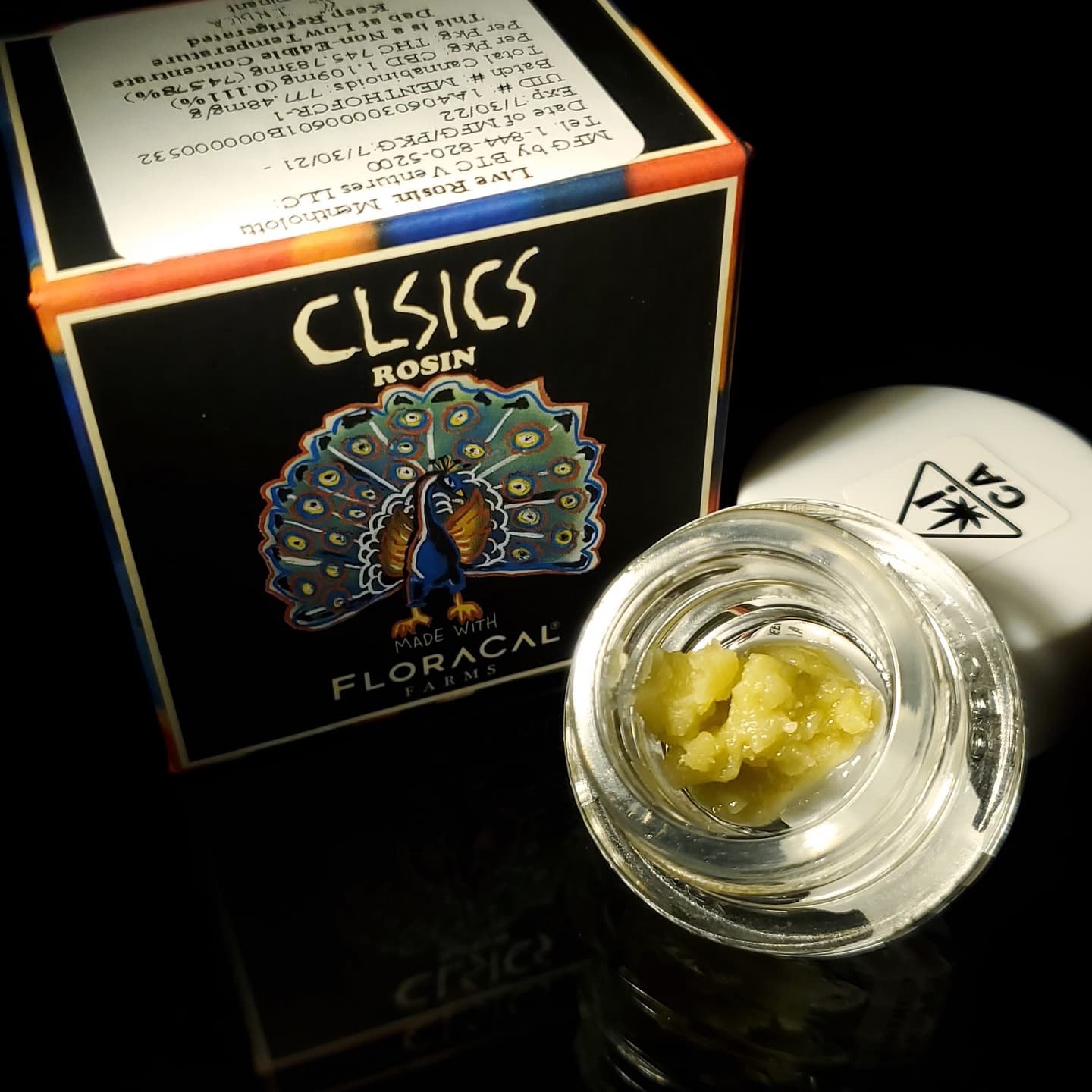 The color and consistency of Mentholatti resembles Have Hash, Suprize Suprize and/or LA Family Farms

Next, Mentholatti is an Indica dominant hybrid cross between The Menthol and Biscotti. The look of Mentholatti is much lighter in color, compared to Lemon Bean. Its pale color, smooth texture and silky consistency resemble whipped margarine, similar to Have Hash, Suprize Suprize and/or LA Family Farms. The aroma of Mentholatti is minty, earthy and peppery with hints of menthol, pine and diesel. The taste of Mentholatti is similarly minty, piney and earthy. The effects of Mentholatti felt deeply relaxing and soothing after a slight cerebral buzz.

This live rosin is also preferable in a traditional glass banger and portable E-rig with a quartz dish for the best flavor. Although Mentholatti is a bit of a mystery, its parent Biscotti is known to treat symptoms of anxiety, depression, mood swings, and chronic pain. The THC % of Mentholatti is 74.57%, the CBD % is 0.11% and the total cannabinoid % is 77.75%. 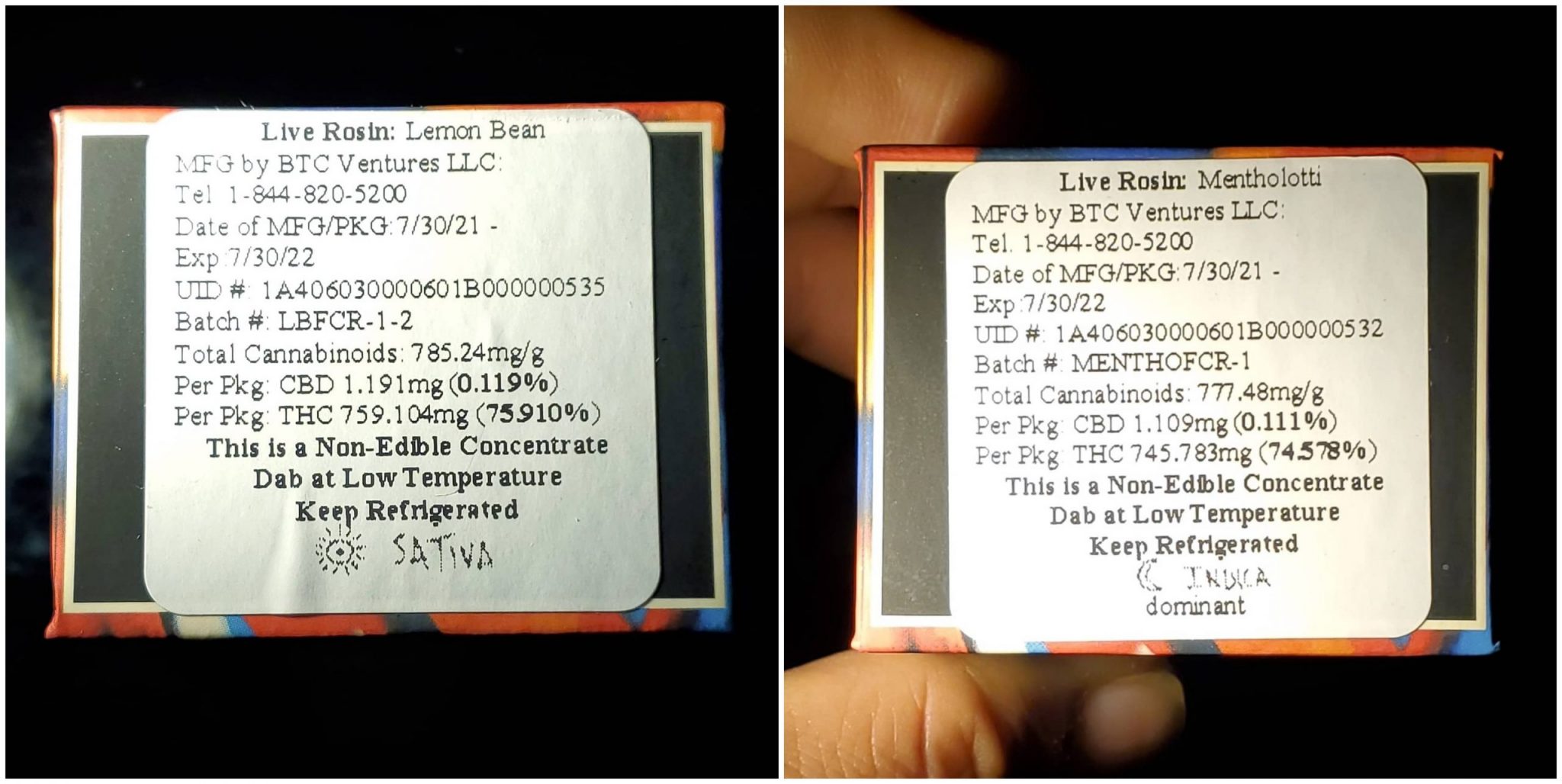 The quality and price of CLSICS live rosin is just as solid and agreeable as Field Extracts, Maven Extracts, and Schackow Farms

The retail price for CLSICS live rosin is usually around $65 for a gram, pre-tax. Overall, this is one of the more affordable live rosins you can find in California. In terms of quality and price, the Mentholatti live rosin is similar to Field Extracts, Maven Extracts, and Schackow Farms. Sadly, the flavor of Lemon Bean wasn’t quite as tasty as Melon Ringz or Mentholatti. Overall, the Mentholatti was the tastiest of the three strains I’ve tried from this brand so far. Although I was disappointed by Lemon Bean, its potency felt just as strong as Mentholatti. While CLSICS isn’t quite as pricey as Feeling Frosty, Cali Stripe Concentrates and West Coast Cure, its quality and price is just as solid and agreeable as the live rosin badders from Field Extracts, Maven Extracts, and Schackow Farms.

Although I was slightly disappointed in Lemon Bean, I would still highly recommend CLSICS live rosin, specifically for their Mentholatti

Finally, to rehash (pun intended) our review, CLSICS Mentholatti live rosin is recommended for its robust flavor, smooth consistency and extremely relaxing effects. However, Lemon Bean is an acquired taste with its hint of burnt rubber, which wasn’t my favorite. In my opinion, the live rosin from Floracal Farms is a slight improvement in terms of potency over their previous Melon Ringz live rosin, which I still enjoyed for its solid flavor. You can find all CLSICS products, including their live rosin concentrates and pre-rolls, with their store locator. You can also find out more about how they create their solventless live rosin pre-rolls here.

Have you tried CLSICS products? Let us know in the comments or on our forum.