Home Culture On That Hollyweed Night : In Those Hollyweed Hills

See You Next Year In Hollyweed

Somebody put the weed into Hollywood! You heard me right. At some point between those final dark hours of 2016 and the rising sun that would greet a new year, someone changed out the big Hollywood sign to read “Hollyweed”.

Looking over the Los Angeles valley that gives the sign its name, the famous hillside welcome is no stranger to alterations. Pulling off the “double o switch” on the Hollywood sign might not seem like much at first. Until one takes into account the steep cliffs, razor fencing, rattlesnakes, and top notch security around the monument. This was surely no rookie job. 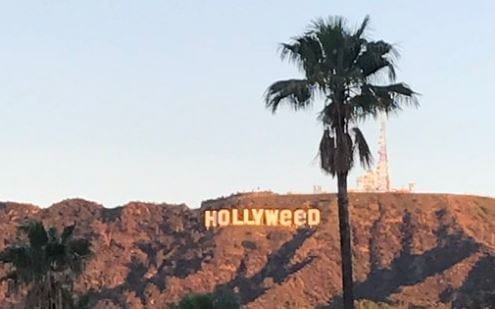 The Times (And Signs) They Are A Changin’

With the recent November election and California’s legalization of recreational marijuana, one has to wonder if the sign wasn’t changed to make a political statement. A close look at photographs shows that white banners were used to fill in both “O”s. Strategically placed black banners then covered the bottom white lettering and completed the change.

The Hollywood sign owns a history rich in change of which vandalism plays a very small role. It’s initial construction in 1923 was larger, covered with light bulbs, and read Hollywoodland. The marketing campaign of a real estate development company, and the sign wasn’t expected to last more than a year. Boy were they wrong.

Most changes to the sign over the years have been due to lack of care, a car crash that took out a letter, and barely surviving a community vote to have it removed. Nevertheless, the sign now prospers. And though weed might be legal, changing a historical monument is not. Still, Hollyweed does seem fitting to the changing of the times.

Smoke Some More – It’s Been Changed Before

Brilliantly replaying the past or ignorant execution of an unoriginal idea? If police ever catch up to the perpetrator(s), they’ll have the chance to ask this question. The fact remains that the very same prank occurred back in 1976. It seems that herbal popularity hasn’t changed that much over the course of 41 years. At least not in Hollywoodland.

The New Year’s day rendition of Hollyweed got its time in the limelight. Enough so that massive amounts of onlookers were able to take plenty of pics, and with plenty of time for coverage by major news sources.

The Hollywood Sign Trust organization that takes care of the sign decided not to keep the changes. Their spokeswoman Betsy Isroelit expected the sign to be fixed in just a few hours. Sure enough, by 10:45 a.m. they put the wood back into the Holly.