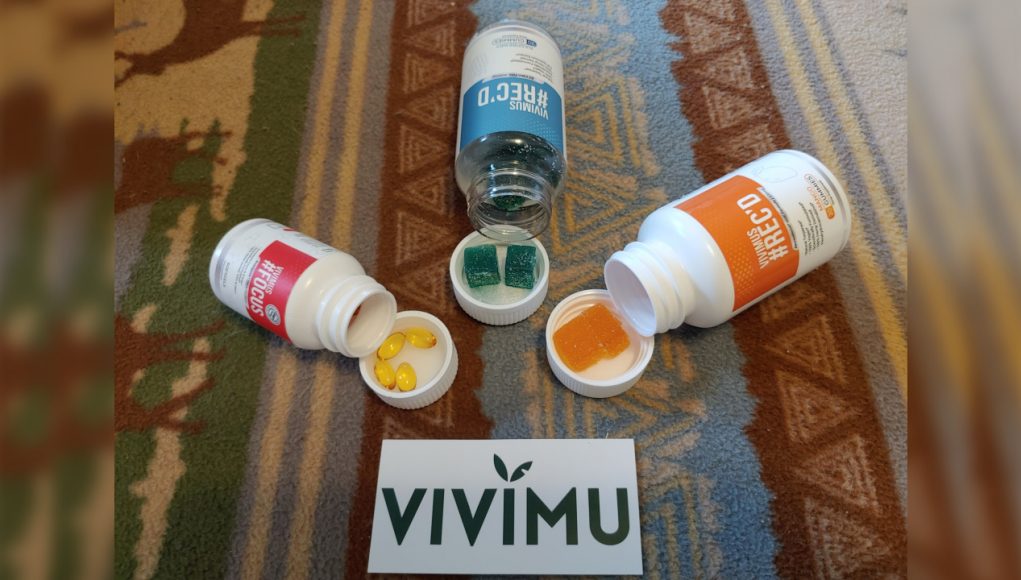 As your humble author has noted in previous rants, cannabis is now a designer drug family with innovative new chemistry coming out every day. There’s a new term we see floating around the canna-sphere: “alternative cannabinoids,” as a catch-all term for isomers, acetates, and other variations on standard THC / CBD. It even has its own subreddit. Recall that cannabis natively contains roughly 100 cannabinoids, and when you count all the isomers like delta 8, there could be thousands of these alternative cannabinoids to explore.

So we’re in alt-cannabinoids territory.

Reviewing edibles is a different business from other types of cannabis consumption. The effects and duration vary for everybody. The alternative cannabinoids should also be approached with caution for the first-timer, because many of these are critically under-researched and different users report different results.

I, myself, when reviewing edibles, also wantonly break the maximum dosage recommendation on the bottle. As they say on Mythbusters, DO NOT TRY THIS AT HOME. I’m an experienced drug reviewer with a sky-high tolerance and the constitution of a Ukrainian tank. You, on the other hand, should follow the recommended precautions. I do this as a standard practice, because cannabinoids are known to have different effects at different dosage. First I start with one dose, wait the requisite 2 hours, note the effects, then use that to gauge how many more to take for maximized effect.

One more thing to note about edibles is that the effects are more potent than other forms of consumption. 30MG of THC in a dry herb bowl, smoked for your morning wake-n-bake, will have far weaker effects that eating 30MG of the same THC. Also, edibles hit you right away first thing in the morning on an empty stomach with a coffee chaser; consume them after a meal and the effects will take much longer to kick in.

Now then, for our pill-popping adventure, let’s take these one bottle at a time. When I test edibles, I have to do them at a rate of one per day, because edibles stay in your system so long, and without any smoking / vaping / dabbing / etc. on that day, because I have to isolate the effect of the edible itself. 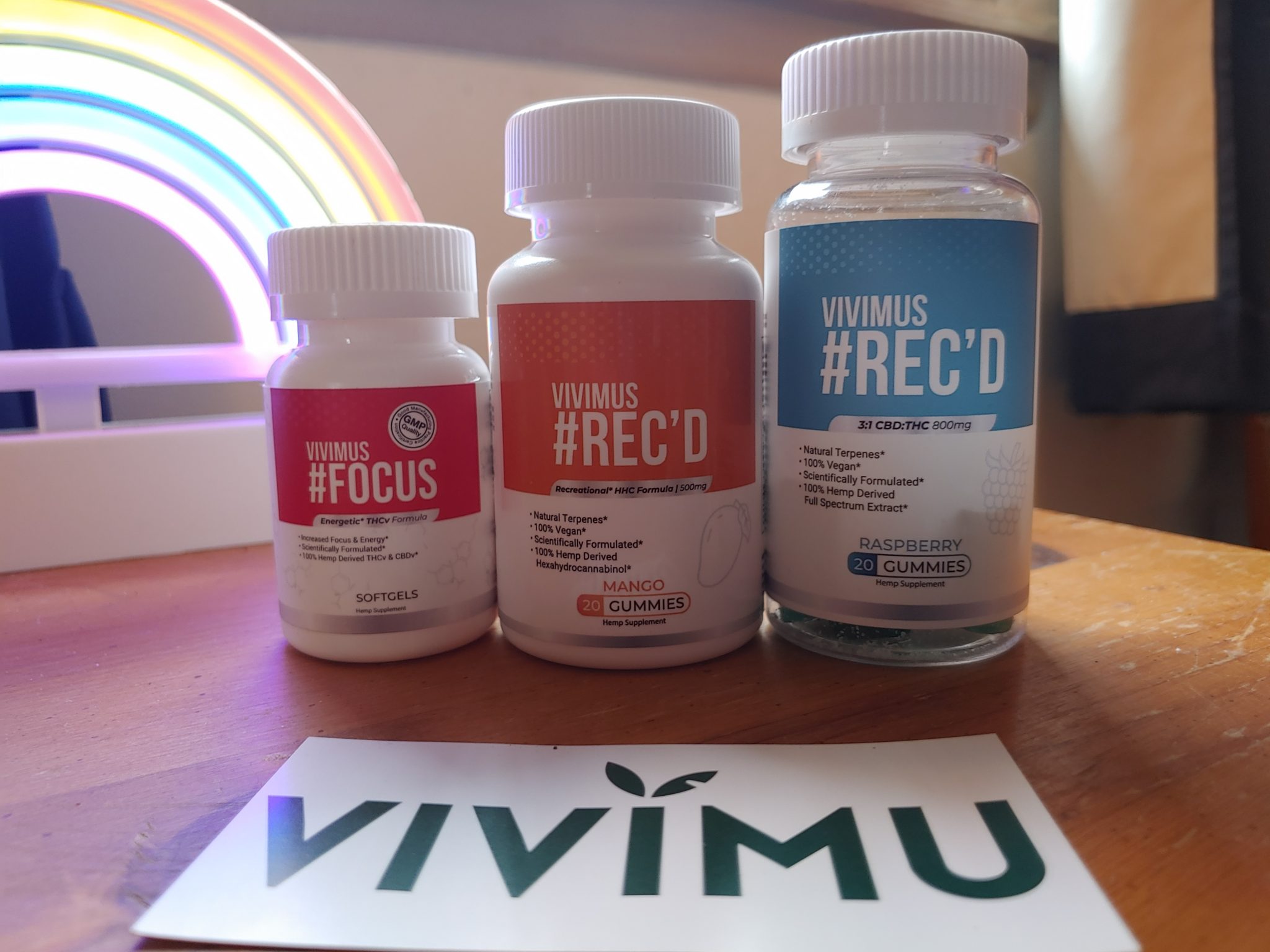 We’ll start with the most familiar cannbinoids on the list. These are “100% hemp-derived full spectrum extract.” I got the raspberry flavor, which had a mildly berry taste but an aftertaste like cough syrup. I mentally deduct a point for flavor on these, but I understand quality control for flavor isn’t easy to nail down.

The 3:1 CBD/THC gummies did exactly what you expect a cannabis edible to do: They got me stoned. One dose had hardly any effect, just a mild tease. Taking two more got me pretty ripped, but still functional. And naturally edibles stay in your system longer so I was good to go for the day off that. I definitely felt the entourage effects from CBD + terpenes. I just can’t pin down *which* terpenes, but they felt hybrid-ish?

I’d recommend Vivimu’s #REC’D 3:1 CBD/THC gummies as just about as good as any other cannabis gummy out there, for recreational / therapeutic users who want a discreet consumption method. It does what it says on the tin, and the small dosage unit makes it easier to adjust to your individual tolerance.

We now set out for unexplored territory! This is my first time trying HHC, and I can testify that first-time users had better be prepared for something different. If you gave me these blindfolded and asked me what drug I was on, “cannabis” would have only been my third-or-so guess. The effects of HHC are poorly documented since this cannabinoid so recently hit the market, and user reports are all over the place. Your mileage may vary.

First off, these were the mango flavor, and they hit it out of the park on the flavor this time! There is a very mild aftertaste, but it overwhelmingly smells and tastes like sweet mango candy.

Now for the effects… HHC is Hexahydrocannabinol. While it is a naturally-occurring cannabinoid found in the hemp family, it is only found in tiny trace amounts compared to the rest of the plant. However, it is easy to fabricate HHC for larger quantities, by introducing a hydrogen atom to a THC molecule, in a process called “hydrogenization.”

My experience with HHC is that its effect on me was similar to CBG, which I’ve tried in dry herb hemp form. One dose of Vivinu’s #REC’D Recreational HHC Formula left me slightly underwhelmed, but definitely feeling something. I felt some CBD-like entourage effects, a relaxing body sensation, but not much going on in the ol’ noggin. If anything, I simply felt alert.

As an HHC first-timer, I tried another dose on top of that one, waited a while, then tried two more. After that whole load kicked in, I had a remarkably focused and motivated state of mind, like I’d popped some Adderall. I had the same “scholar’s high” effect as CBG; I felt like I could memorize the phone book if I wanted to. As it is, I dove into my little art-theater audiofiction podcast side-project. I was a productive, happy little beaver.

Long-time readers will note that I’m not the average bear when it comes to stoners. I’ve gotten baked before; now I’m here for the side quests, among them my hunt for good nootropics. So far I have HHC and CBG marked for further investigation.

There was very mild euphoria effects, but no brain fog at all. If anything, I was unfailingly cheerful, like a really good pharmaceutical antidepressant. It also kept me awake far longer than ordinary cannabis does. I had zero giggles, however, and like I say, HHC didn’t even feel like cannabis to me.

Now I see that some users out there in the altcannabinoid discussion boards report effects ranging from “just as stoned as THC” to “sort of psychedelic.” And I have it on a friend’s anecdote that some users experience HHC as a “trippy” experience. I don’t know how to support that, but I could say that maybe HHC has an edge there somewhere in the space between “uppers” and “trippers.” Ecstasy occupies a similar space, so who knows? Honestly it’s impossible to tell yet, because it’s all so subjective.

So, bottom line: Play with HHC cautiously, see if it finds a place on your cannabinoid shelf. But if you want a tasty and efficient dose of HHC, I can recommend Vivimu’s #REC’D Recreational HHC Formula.

Last we come to the least aesthetic of the Vivimu edible journey, softgel pills. Flavor is no issue here, you just gulp ’em down. One dose, after a long time, had done exactly nothing. That’s when I looked up THCv (which I should have done before) and discovered that at low doses, it’s actually an endocannabinoid antagonist, actually blocking your system so other cannabinoids can’t get through.

On that charge alone, could you count this as a “sober pill” after a session? At higher doses, the story changes. The description of THCv’s effects is now familiar to us from HHC and CBG: Another super-charged, clear-headed effect like Adderall in pill form. I tried a couple more and said, heh, that’s pretty close. Again, I really did not feel “buzzed” in a weed sense, but like I was taking a weaker version of HHC or CBG. I was still a productive beaver for the rest of the day, slightly less cheery. Since the softgels are not full-spectrum like the gummies are, it’s probably the lack of an entourage effect that made it feel like I was missing something.

By this time, I was a little looped out from my exotic cannabinoid trip. I found the softgels to be a let-down after the speedy HHC experience, or maybe THCv just does not hit me the same, or maybe one builds up your tolerance for the other.

But I can recommend them for those who want a squeaky-clean dose of just this one cannabinoid, if you have had better experiences with THCv.

In Conclusion, Vivimu Has a Solid Line of Edibles Worth Checking Out

Vivimu seems a top-flight company in producing near-pharmaceutical products, especially advised for therapeutic use or those whose lifestyles require super-discreet consumption. To look at these in your medicine cabinet, you’re barely know they were cannabis-related without reading the packaging. For the party animals, meh, they serve their purpose, but you’re probably too busy blazing through some diamond sauce extract to bother with gummies.

Find out more about Vivimu products here. Readers, please share your experience with Vivimu, edibles, or exotic cannabinoids like HHC here in the comments or in our kushy forum.