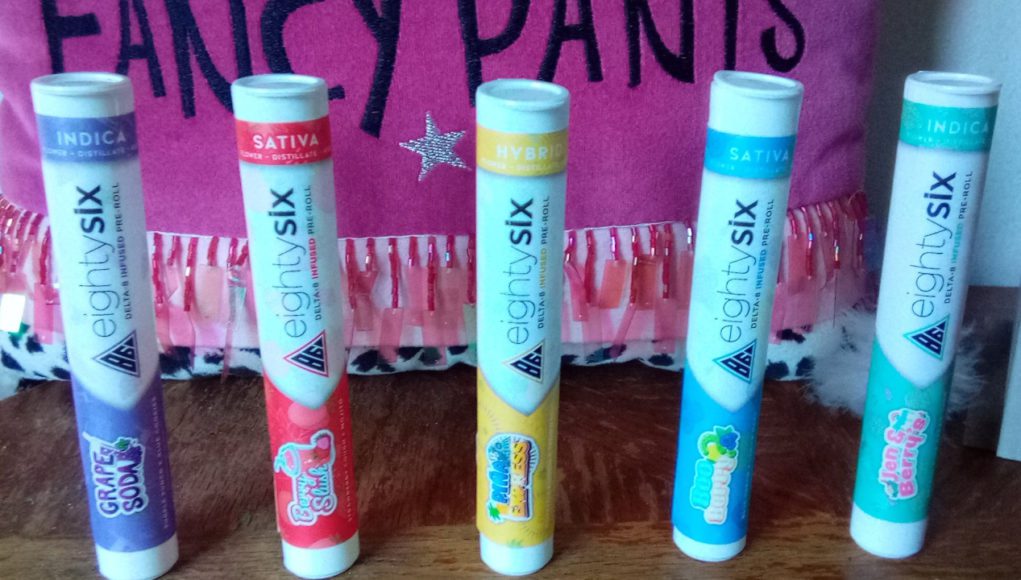 Hello, smokers, jokers, and midnight tokers! Penguin Pete, your Jester of Joints, here with a follow-up our other Eighty-Six Brands preroll review. TR Sun tried the THC-O prerolls, while I got the Delta 8s. Similar to his review, I too found them enjoyable.

Recommendations: Honestly, these are near-perfection now! Maybe you could list the potency per batch and tweak the flavor formula a little. 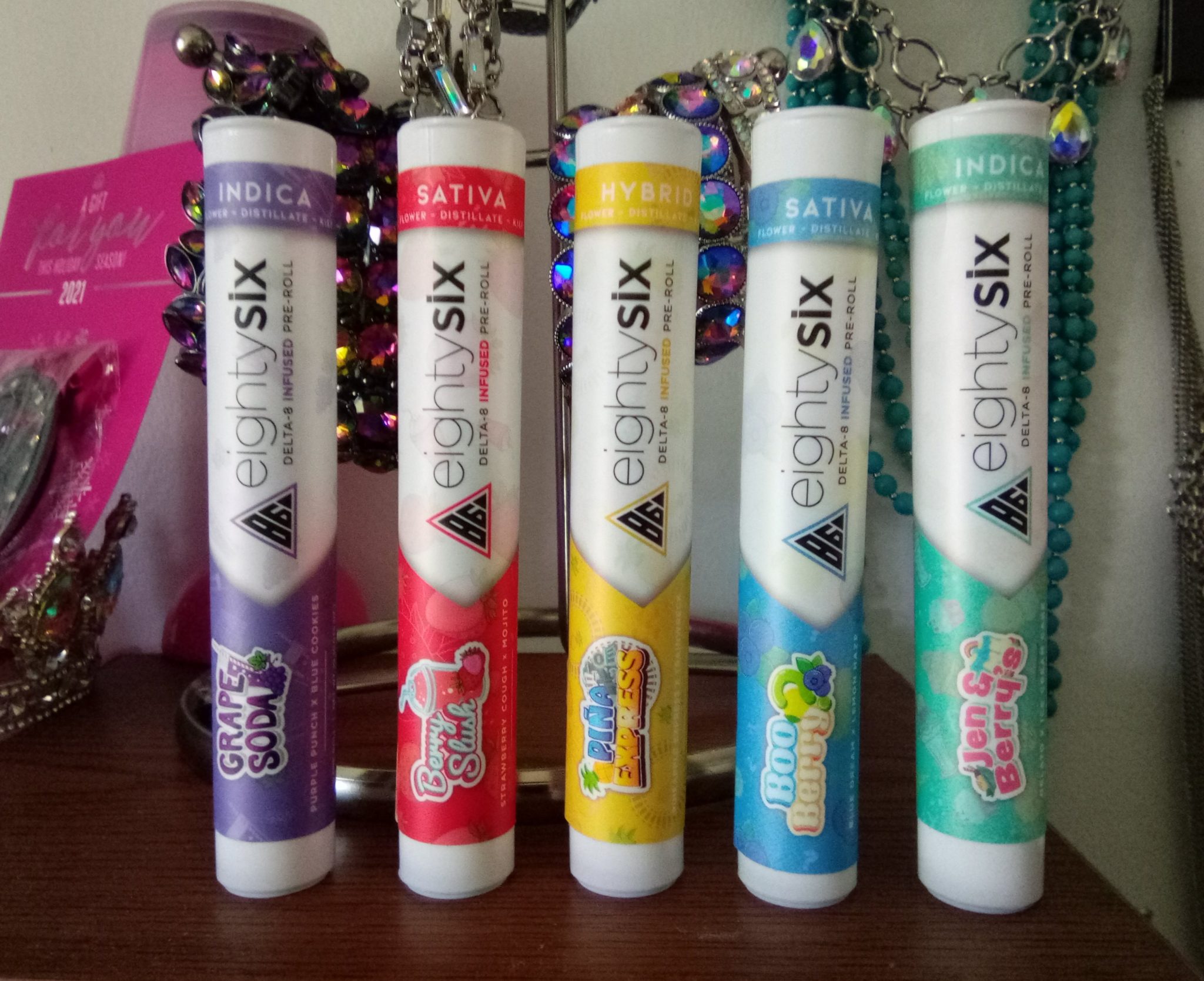 Just An Enjoyable Smoke All Around

I almost forgot these existed, since I’ve been reviewing everything around here from edible gummies to laser-powered hookahs. Oh yes, joints, actual honest-to-god joints, with paper and everything! No batteries to charge, no buttons to fiddle with, no glass to clean! Man, I thought I’d never see the day again.

This is one of the few times when Mrs. Penguin, my spouse of 29 years (anniversary just this last August) joined in on the testing. She’s old-school, strictly using bongs and joints, caring not for the menagerie of vapes and dab rigs which normally festoon my mad scientist’s drug lab. She, too, enjoyed these prerolls tremendously, and so we were transported back to those summer nights passing a joint in the car at the drive-in movie theater, not a care in the world.

These are also quite tasty, but they are also flavored with non-cannabis terpenes. To their credit, Eighty-Six puts the ingredients right on the label, but stops short at explaining “flavorings.”

I also got a five-flavor spectrum just like in TR Sun’s THC-O review, and likewise felt a bit spoiled. In ranking order, our favorite flavors were:

Like TR Sun, I also favor the tropical, South Seas strains and some pineapple flavor – cannabis natively even has terpenes in common with tropical fruits. So this is the one you’d expect they’d nail, but perhaps they backed off on the flavor so it’s not too strong.

With this said, all the flavors were smooth, satisfying, and had great effects. We found all the strains to be giddy and uplifting, but none of them were extreme on the potency. Going by Eighty-Six Brands lab tests, which are comprehensive, we see 11.7% delta 8 and CBG 9.9. That’s right about what I would have guessed, with the CBG adding some extra energy to the formula. 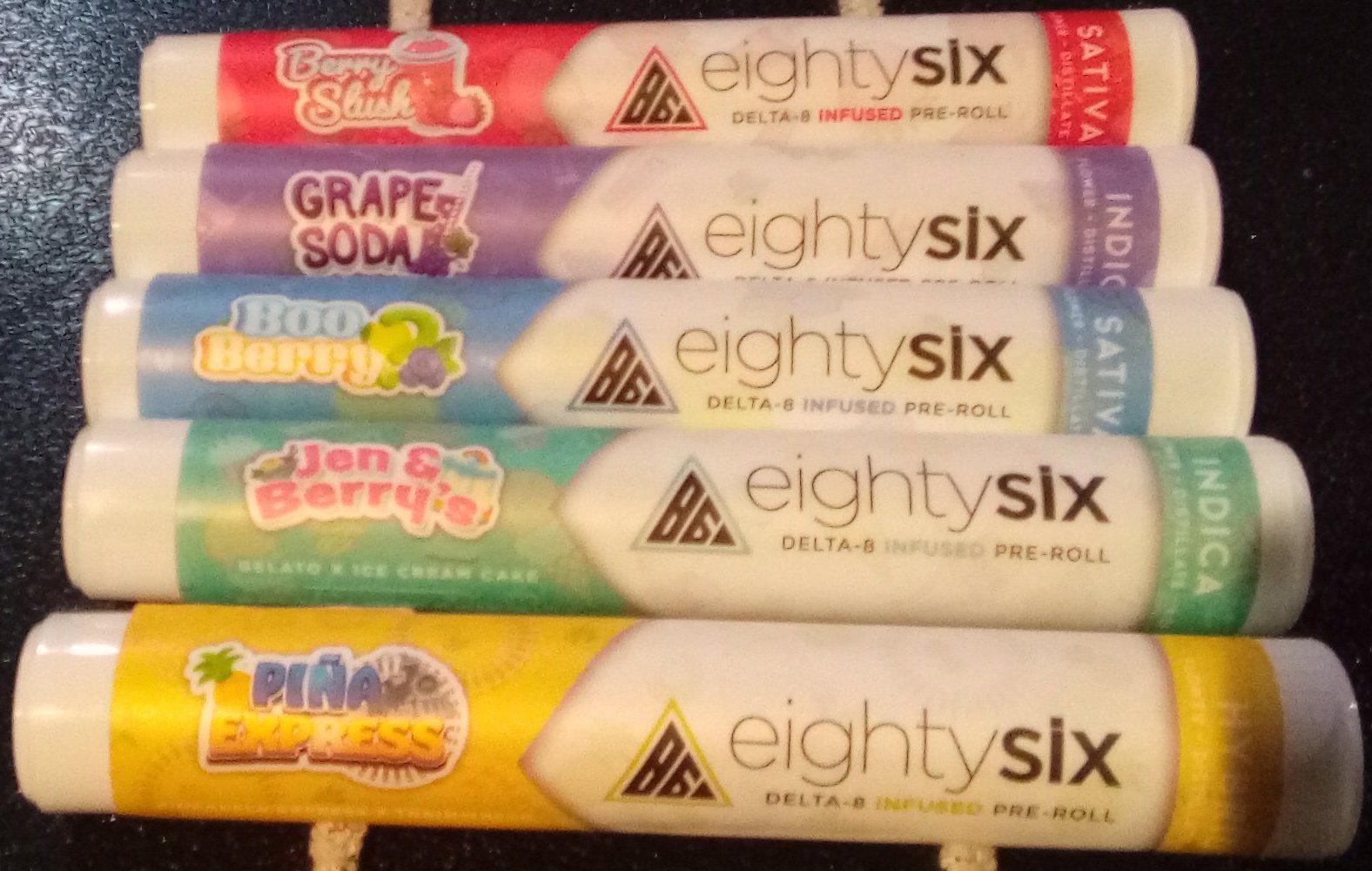 At $9.99 each, these 1-gram prerolls are reasonably priced. You can tell that the product is aimed for recreational users, for those who enjoy hemp products and want using them to be as no-fuss and flavorful as possible. These prerolls burn evenly and taste as good on the last puff as they did on the first. They were made with the inspiration: “smoking joints should be fun.” And while we’re all about the serious business of cannabis around here, it is refreshing to see a product that just wants to be the best joint you’ve smoked today, nothing more. Blazed are the meek.

Hardcore cannabis users may not be that impressed. As said before, delta 8 has about exactly half the effect of THC, so many stoners don’t have the time for delta 8 in the first place. These are good potency, right at the middle of what I’d expect. But not that strong. If anything, CBG always seems to give delta 8 a kick for me, making for a more clear-headed, uplifting buzz. So for average or casual users, these will fit the bill perfectly.

Readers, you can mind-meld your thoughts with the hivemind about Eighty-Six Brands, pre-rolls, delta 8, CBG, the combination of same, or the price of tea in China here in the comments below or in our humble little forum.