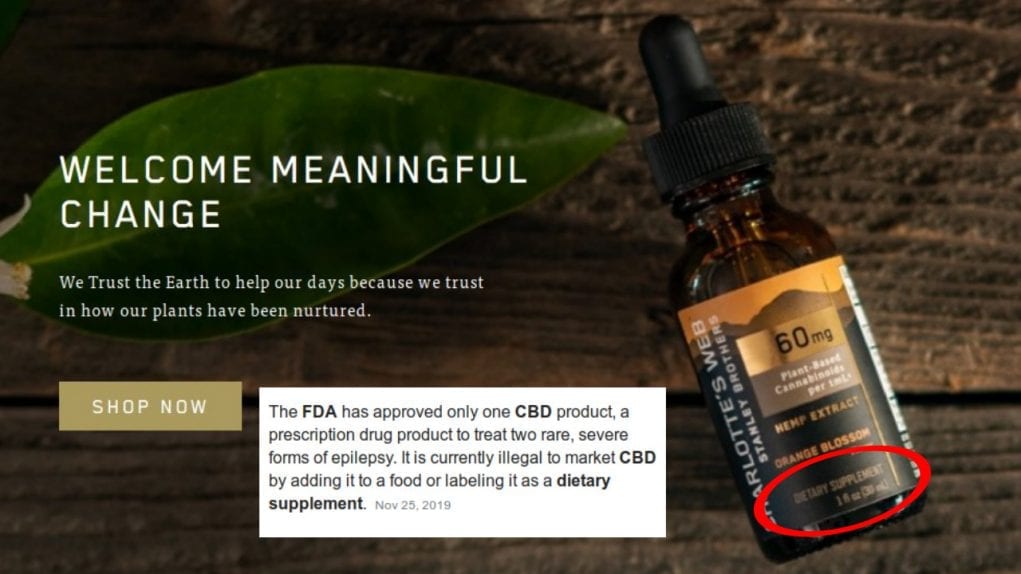 Charlotte’s Web Holdings, Inc., a CBD Oil company, is the latest to be hit with a class action lawsuit concerning the advertised claims allegedly made on their CBD products. If this sounds like a familiar story, it’s because we’ve already covered similar class action lawsuits against:

Charlotte’s Web Holdings (no relation to the classic children’s novel) has been served with consumer class action lawsuits claiming violations of FDA regulations and California law.

Allegedly, Charlotte’s Web CBD oil products are labeled as dietary supplements. That’s an easy claim to check, with these images taken directly from their website:

Yup, it appears to say “dietary supplement” on that label in that picture. Is that a no-no? From the FDA (Food and Drug Administration) website:

> “Can THC or CBD products be sold as dietary supplements?”

Well, that’s a pretty locked-in statement by the FDA from where we sit. Of course, as we’ve covered before, the FDA comes down hard on all CBD / THC medical-related claims. It does not currently matter how much research we do on medical benefits of cannabis and hemp products – the FDA recognizes just a few medical cannabis applications which are available by prescription only, and none over the counter.

The FDA has sent warnings out to several companies that market CBD products, and these warning letters have continued annually from 2015 to 2019. Their precaution: “It is important to note that these products are not approved by FDA for the diagnosis, cure, mitigation, treatment, or prevention of any disease.”

There’s a list on the FDA site of all companies they’ve issued warnings to. Since all the class actions against CBD companies we’ve covered here have all been linked to California, we’re guessing that companies in California are especially prone to be targeted with lawsuits.

Charlotte’s Web has fired back denying the claims

The suit was filed in the name of one customer who allegedly purchased olive-flavored CBD oil from the company’s website. Charlotte’s Web Holdings has allegedly issued the following statement concerning the lawsuit:

> “The Company believes that its products are accurately labeled and that the claims are without merit,” it said in a Dec. 2 statement. “The Company intends to vigorously defend itself against any such suits.”

> “Charlotte’s Web Holdings, Inc. is the market leader in the production and distribution of innovative hemp-derived cannabidiol (“CBD”) wellness products.”

There, see? The FDA has far more relaxed standards for the word “wellness.” At least in certain applications, although we’ll freely admit that it’s hard to place exactly where the FDA stands on each individual word without an interpreter sometimes. Still, if you call it “wellness juice” or whatever it takes, then maybe the lawsuits don’t have a claim.

Are we jumping the gun on CBD?

It really seems as if CBD is beginning to outpace THC as the most controversial compound extracted from the cannabis plant. The Atlantic comments on this CBD fad, noting that even Martha Stewart is launching her own CBD line. Yes, Forbes confirms it, Martha is partnering with Canopy Growth, touting CBD products.

And before you ask, Canopy Growth is based out of Ontario, Canada, so they’re not under the US FDA’s jurisdiction and can therefore claim whatever they want on their CBD oil product labels within Canadian law.

The thing is, everybody seems to be in an all-fired hurry to declare CBD the new miracle drug and give it their kids, dogs, and cats. We might all do better to take a step back and wait for the research to come through. One species at a time, please.

Apparently, you can’t be a doctor getting interviewed by the press and publicly state your observations about companies conflicting with the FDA regarding the selling of CBD oil. Dr. Joseph Dorn in an interview with WBBH-TV in 2016 allegedly alleged that “somebody like this, they’re not playing by the rules” regarding a cannabis product being sold on Groupon.

LexisNexis states the crux of the matter:

The product in question was indeed allegedly “Charlotte’s Web,” but the defamation suit is coming from AFI Holdings of Illinois, AKA “Happy Leaves Inc.” This is the apparent owner of Stanley Brothers, of which Charlotte’s Web is apparently a subsidiary.

The doctor in the lawsuit is a chief medical officer with Medical Marijuana Treatment Clinics of Florida. The lawsuit also names the news station as a co-defendant, whose attorneys assert the anchors and reporter are protected by the First Amendment.

Whew! Good old First Amendment, we were wondering when somebody was going to bring that up. Hey, by the way, we’re a blog, and we are sharing this story in order to inform the public. Exactly like a news station would.

In an FAQ in the Tampa Bay Times, it is asserted that the legality of selling CBD in Florida is at least “contested.”

> “Well, the Florida Department of Agriculture has said it’s not legal to sell hemp or CBD in the state. But Agriculture Commissioner Nikki Fried is pushing legislation currently under consideration that would make state and federal law consistent.”

Wow. Thanks. We’re happy for Mr. Fried’s efforts and wish him the best of luck, BUT IS THE LAW CURRENTLY “LEGAL” OR “NOT LEGAL”? This is a binary question. You don’t get off on a speeding ticket because somebody’s trying to lobby the state to raise the speed limit at some time in the future.

As we note in our state-by-state index of cannabis law, Florida has the permanent status of “It’s complicated.” Will we ever get to the undisputed truth about anything?

Readers, care to weigh in on the situation?

Just be careful what you say, so you don’t get sued next. Join us for a very careful discussion here in the comments or in our forum.