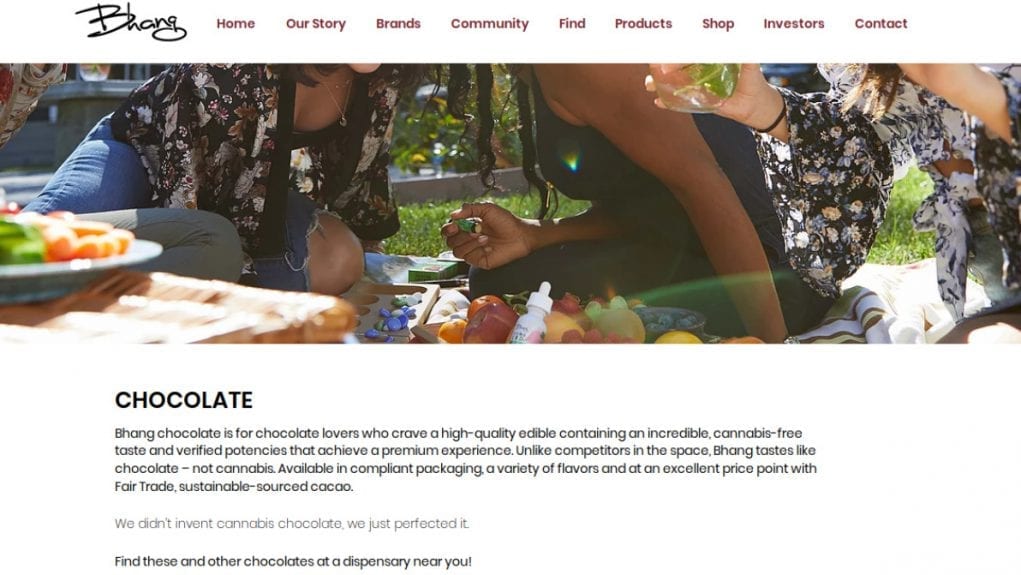 CBD class action lawsuits have become widespread in the wake of partial legalization, but this time the story is different. Today’s lawsuit asks: “Are your edibles potent enough?” That’s the gravamen of the complaint against Florida’s Bhang corporation.

There’s a whole lot to unpack with this story, so bear with us!

The lawsuit (subscription wall link) complains that Florida-based Bhang Corp. claimed its edibles chocolate products contained far greater amounts of THC and CBD than they in fact had, in order to charge consumers inflated prices. The plaintiff alleges that they bought Bhang medical chocolates between 2016 and 2018 and were mislead as to the chocolate’s potency. The lawsuit further claims that the company’s executives “knowingly misrepresented the amounts of THC and CBD in the products.”

The class action lawsuit is representing one national class of customers and one specific class of California customers, totaling “many thousands” of customers and seeking $5 million in damages. California has specific unfair competition and false advertising laws which are apparently seen as particularly relevant to this case.

Bhang is based in Florida, but sells in California, Illinois, and New Mexico. So if you bought THC / CBD edibles in any of these three states, you might be part of this class action.

If you follow our handy state legalization directory, cannabis is fully legal in California and about to be fully legal in Illinois, and nearly full legal in New Mexico. It’s complicated in Florida, so Bhang doesn’t sell in their home state.

We have to note the irony here: Bhang’s award listing establishes that at least some people must find their edible products’ qualities acceptable. Here’s a list of relevant awards:

For a company getting sued over the quality of their chocolate edibles, that is a jaw-dropping run of awards for best edibles covering a solid decade. There had better be some lab tests on these edibles to back up the class action’s claim.

As we mentioned, CBD companies just seem to be lawsuit magnets lately. Similar lawsuits include claims against Hemp Bombs (alleges their CBD products are “grossly underdosed”) and another Florida company, Diamond CBD (alleges misrepresented the amount of CBD in their gummy candy). Actual text from that lawsuit:

> “Unfortunately, as is often the case with emerging industries subject to minimal regulation, the CBD market is ripe for exploitation by unscrupulous businesses, and it has been compared to the ‘Wild West.'”

We’ll go along with that “wild west” part, because this is an exciting time in history which we’ll be telling our grandkids about. When we were all canna-cowboys!

Diamond CBD has fired back asking for a dismissal of their case, saying that regulations allow some leeway for quantities of dietary ingredients, and that the allegation also fails to show any concrete injury. If that dismissal stands, it could set a precedent for Bhang’s case.

How do you regulate CBD potency when the FDA won’t let you make medical claims?

As we’ve covered before, the FDA is fanatical about slapping down any over-the-counter CBD-hemp product which makes any medical claim that their product is effective in “diagnosis, cure, mitigation, treatment, or prevention of any disease.” That goes for people, dogs, anything. The FDA has so far only allowed “one cannabis-derived and three cannabis-related drug products,” but “only available with a prescription from a licensed healthcare provider.”

So we have a catch-22 here. On the one hand, the FDA says “If you bought it over the counter and it contains a single CBD molecule, we don’t allow it, doesn’t matter if it was fish food.” On the other hand, people are clearly buying CBD products for a reason, that reason being that CBD is alleged to have therapeutic effects beneficial to alleviate the symptoms of certain conditions.

So watch this: You have, say, PTSD, and you buy some CBD chocolates to treat that, and the chocolates, hypothetically, turn out to be bunk. Now you sue the company saying their chocolates were bunk. But what is your injury claim? “The CBD content didn’t help me with my PTSD.” But the FDA says NOBODY is allowed to say their CBD helps PTSD at all! So the company, if it complied, made no claim as to the chocolate’s effectiveness in the first place.

Right now, CBD is in the grayest of gray areas. The Florida company Diamond CBD calls it “an ingredient,” no different from sugar or cinnamon. Food ingredients don’t have to be specified on the label down to the last milligram, we only do that for drugs. But the minute you sell CBD as a drug, that gets the FDA throwing warnings at you.

What is your edible CBD / THC chocolate experience?

If you’ve gotten the chocolate edible munchies and have an experience to share, we’re always up to listen here in the comments or in our forums.