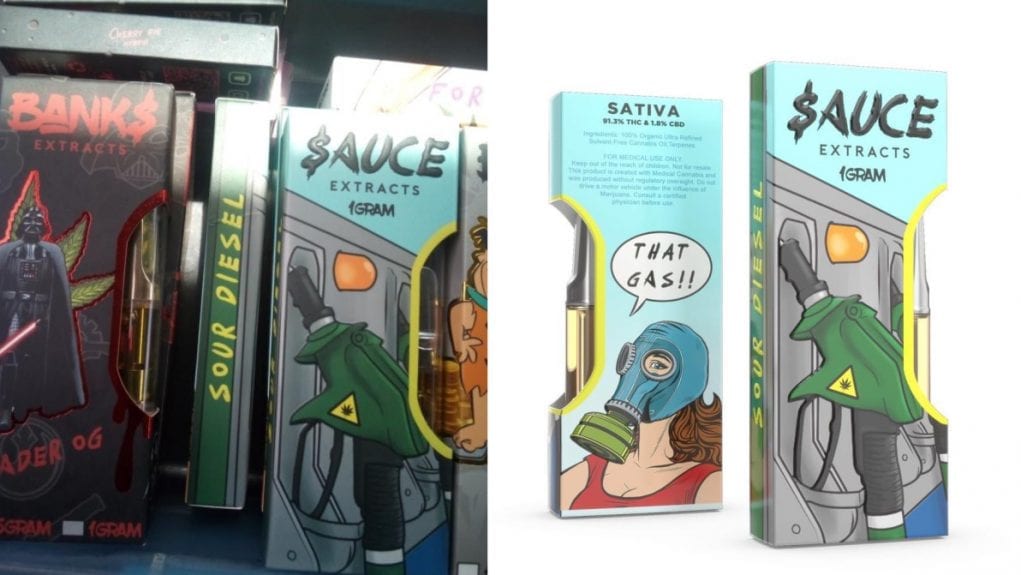 Spinning the wheel of black market carts today, we landed on two apparently linked black market brands of THC carts. One is “Sauce Extracts” which has the Google-unfriendly habit of spelling it with a shift-4 dollar sign: “$auce Extracts.” Another cart that comes up in the same neighborhood is “Banks Extracts,” which is also spelled with the shift-4 “Bank$ Extracts.” Both of them seem to be related to “Ca$h Carts” – you know the drill on the spelling by now.

Sauce and Banks Extracts and Cash Carts are all bogus

We see people asking about these on Reddit a few times:

That second one is asking about a delivery service in Washington D.C. The US capitol is not covered in our state cannabis license directory, so we’ll address this here: Because of D.C.’s special designation within the government, it is legal for recreational and medical uses, but illegal to sell. Possession is still illegal under federal law. Delivery services operate here in a legal gray area – a service may give away the cannabis for a “suggested donation” or toss it in “free” with another purchase of a non-contraband item.

We found one delivery service peddling Sauce. So there it is in California too. As always, need we mention that California law forbids “using cartoons, images popularly used toadvertise to children” in vape packaging anyway. If it has cartoons, candy, comics, anything kid-appealing on the packaging, it’s illegal, before we even need to look for a license.

There’s a Sauce account on Instagram warning us “This is the only real account. Beware of scammers!” We love it when this happens. For every black market brand there’s always five guys screaming that they’re the only real one.

There’s also a Banks account on Instagram. Now notice that they include some shots of $auce vape carts, some “Sauce” branded nug bags, and yet a third brand called “Cash Carts.” Sometimes spelled with a dollar sign as well, “Ca$h Carts,” they pop up in the same channels.

We’re hazarding a guess that Ca$h Carts, Bank$ Extracts, and $auce Extracts are all in a family of variations that will go on mutating through Chinese package-printing infinity.

We’re seeing this all the time for black market brands now. Their Instagram will post a couple pages of lab-like results with some vague meaning attached. This time, the channel posts lab results for Moon Rocks nugs but just to prove potency, but you’ll notice it’s the cropped fractions of two pages which conveniently leave off whose sample it is, and also the QR code is too fuzzy for a scanner to actually use.

The other lab page is for a Fruity Pebbles cart. Well, we are trying that sample ID# there, but it doesn’t seem to be valid. We’re also trying to track down this “Pluto Brands” which has no trademark in the US, EU, or CA. Since Cannalysis Labs (the named lab on the test page) operates out of Santa Ana, California, we also checked for a license in California, but none was found for any company with “Pluto” in its name.

We’re going to call this trail cold for the meantime

In any case, the lab test is still meaningless even if it is legit, since an unregulated brand can intentionally make a clean sample just for the test. We already have the word of the California DPH that there is no way a cart called “Fruity Pebbles” with Fred Flintstone on it can be licensed in California, so a clean test on one cart means squat, it doesn’t matter if it’s unicorn tears.

On of our writters spotted a variant of the “Sauce brand name in the Chicago area, Illinois: 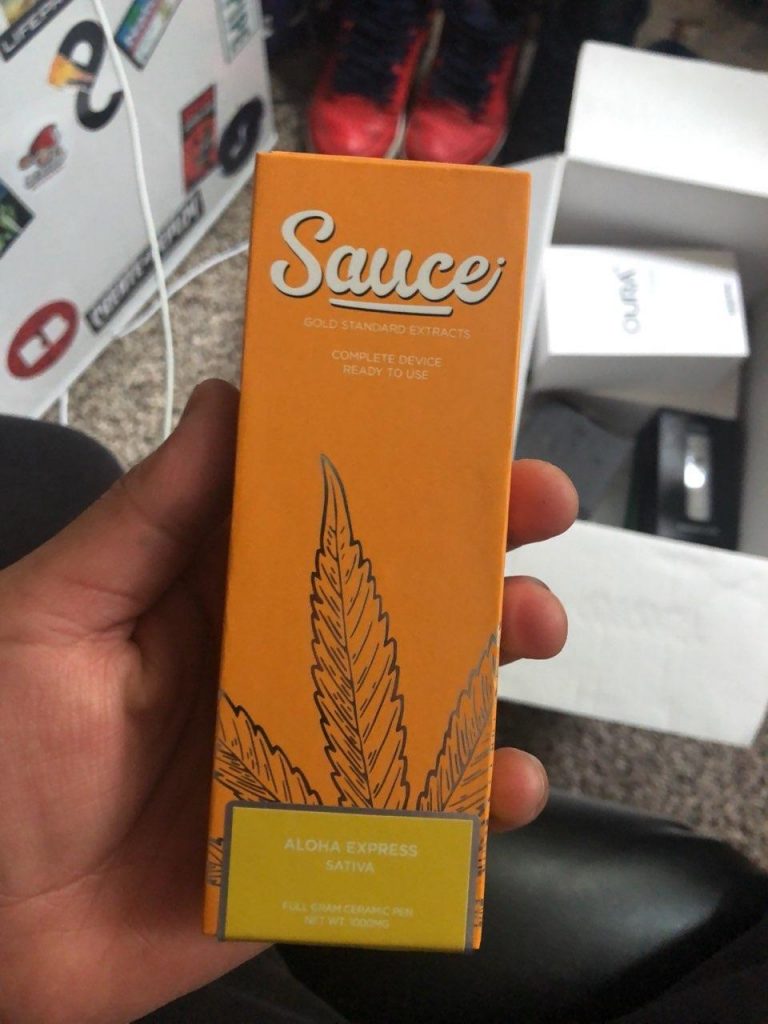 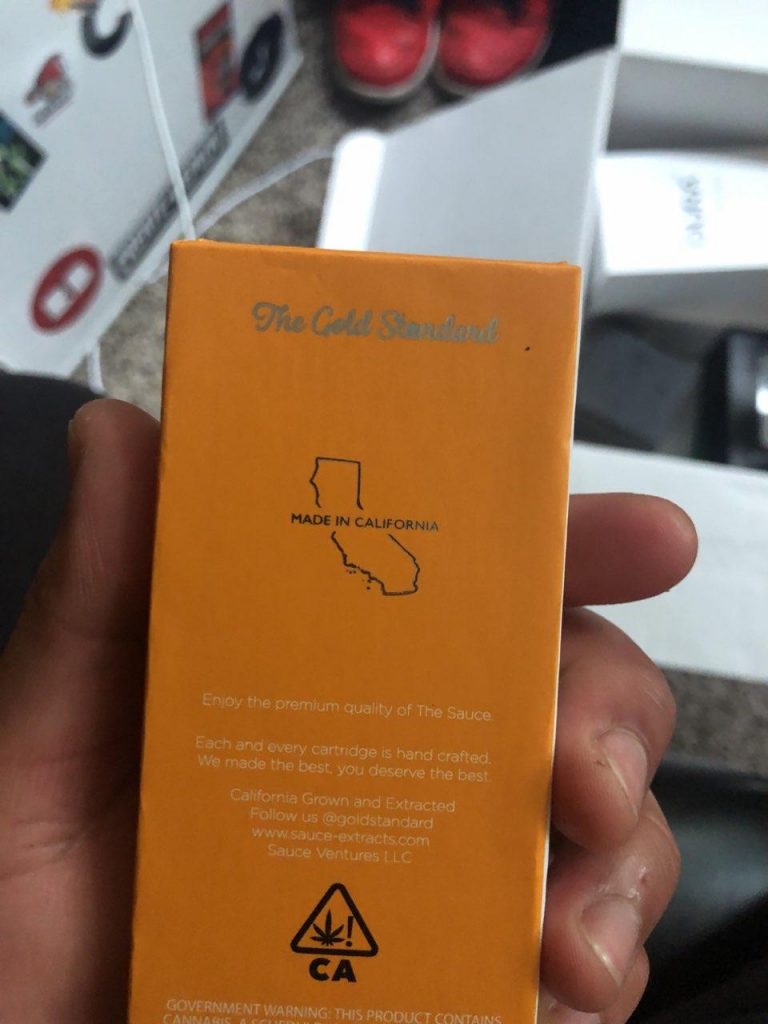 This may or may not be related to our main lineage of black market carts here. However, we found this clue at another online delivery: 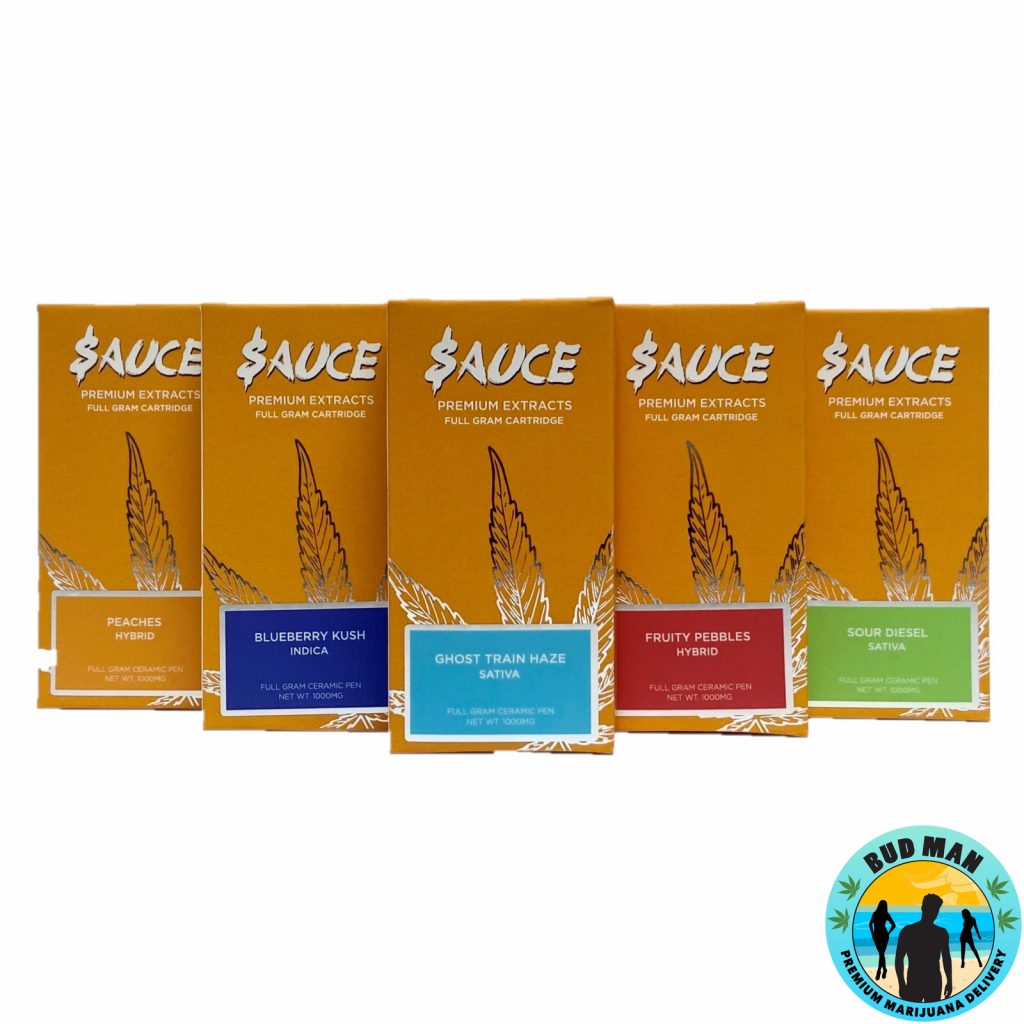 That was from Orange County, California. So we see the same box art, but the same “$auce” stylization as our main cart family here. As we’ve noted before, black market cartridge packaging printers tend to mingle together and borrow hybrid branding from each other. Anything they think will sell will get printed on the next batch. Since they so freely rip off legitimate oil brands with counterfeits, it stands to reason that they’d rip off each other too. There are several more variants on “sauce” out there; it’s a popular term.

Anybody out there have more information on $auce Extracts, Bank$ Extracts, or Ca$h Carts? Have we worn out the $-for-S substitution bit, or is it still just that funny? Give us a honk in the comments or our forum.