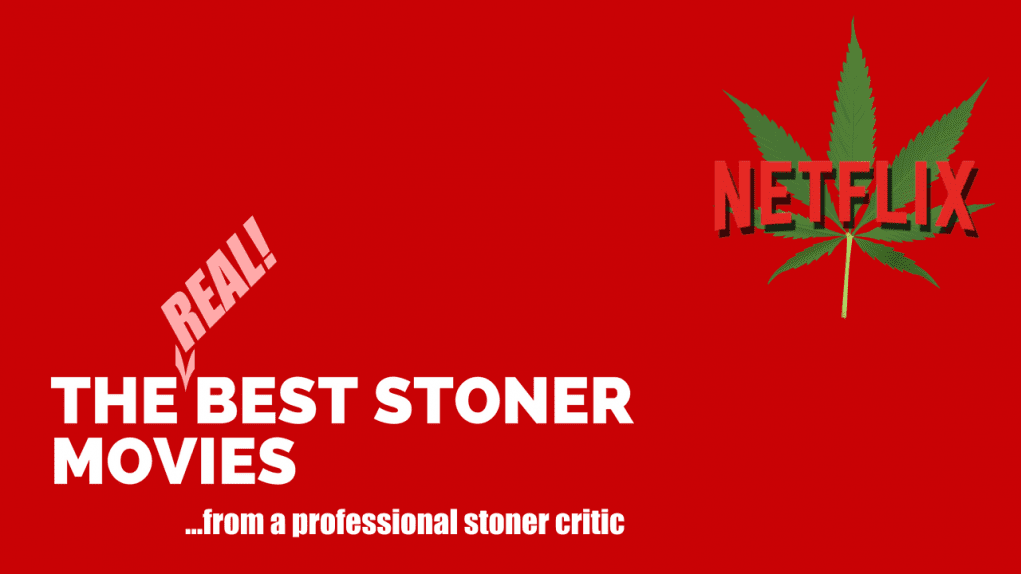 Greetings, fellow stoner movie fans! Let me start by assuring you that you are in the best possible hands on this topic. Your Present Author, Penguin Pete, has movie geek credentials such that I have been on the staff of 366 Weird Movies for going on a decade now, even to the point of getting a review or two into the yearbooks. That’s before you recall my geeky fandom labors with Geeky Domain, or my horror movie expertise with All Horror.

Why stereotypical stoner movies are no good

If you ask most people to fill out a stoner movie list, they’ll fill it with stereotypes…

In real life, get a group of stoners together and put any of these on, and watch everybody get up to go see what’s happening in the back yard. Nope, I’ve hosted a few cannabis-fueled movie parties in my time, and the movies that are a hit with the stoner crowd are a certain kind I cover at the weird-movies gig.

So here’s my formula for the perfect stoner movie:

And if this is your kind of movie anyway, even if you’re straight and sober, help yourself. On with the list:

A dated cult classic, this is a more cerebral comedy that gets compared a lot to Franz Kafka. Don’t worry if you’re not hip to German Bohemian literature though: It’s just this guy who’s flat on his luck stranded in downtown New York surrounded by predatory crazy people who latch onto him all night. Directed by Martin Scorsese to blow off steam in-between more serious films.

The last word in surrealism, this is a post-modern comedy which comes off perfectly for the stoner mood. The humor is subtle and off-beat, while the premise is the stupidest thing you could imagine on paper but works brilliantly in execution. Office workers discover a portal into the head of a famous actor and try to figure out how to exploit it for profit. Everything here makes perfect sense when you’re properly tuned in, trust me.

Recommended strain: Indica that plasters your butt to the couch

My most hesitant recommendation, violating several of the rules I set out. BUT for people who are scared of the unconventional and just want a safe little crowd-pleaser that’s not too threatening, this is one stereotypical stoner comedy movie that’s still decent. Las Vegas has rapidly become the weed capitol of the US, and Terry Gilliam is a trippy enough director on his own to do Hunter S. Thompson justice.

Recommended strain: The spikiest Sativa you have, preferably one that sends you back to kindergarten

It’s tough to describe this movie without referencing The Rocky Horror Picture Show, because it’s made to appeal to exactly the same crowd. Except it’s far, far, FAR more bonkers. It is the definition of an arthouse comedy musical, so campy and zany that you’ll give up trying to make it make sense and just ride along. This was Danny Elfman’s first time doing a film score back when he was with Oingo Boingo, so you know the music rocks.

Recommended strain: The strongest weed you have on hand, strain be damned

Walk cautiously with this one. It was not highly rated and divides audiences to this day. But it is an unbelievably weird half-comedy about a big town banker and his friends getting stuck in a small town as a result of a traffic ticket, with a psychopathic judge out to get them. It’s basically a live-action cartoon. The cast of Chevy Chase, Dan Aykroyd, and John Candy leads you to expect another Ghostbusters or Caddyshack. It is not those, but it is mind-blowingly weird and yet autisticly devoted to its premise.

This movie is best described as a “mathematical thriller,” but don’t let that intimidate you. The math part is well-explained and not that high-level. After that, this is a bouncy arthouse-drama with a kinetic soundtrack and fun visuals. It’s about a computer geek who discovers a mathematical formula so powerful that business goons and ancient religious conspiracies both want it. Will make humanities majors swoon. Directed by Darren Aronofsky as the first and only movie he made before becoming the world’s most depressing downer.

Recommended strain: Medium hybrid with some alcohol on hand

It’s about a tire, yes, like off a car, which is also a serial killer. Isn’t that the stupidest premise you ever heard? The movie will agree, and treat the premise no more seriously than you will. It’s a post-modern comedy and parody of horror movies. In the right frame of mind, it’s amazing, but post-buzz, it’s still clever enough not to be a guilty pleasure.

Recommended strain: Anything, even if you’re dankrupt!

This movie is far too famous and popular for this list, but the reason why we’re including it is because it’s so old that there just may be four stoners who haven’t seen it yet, and they have to. It’s a light-hearted fantasy of wild-eyed proportions about a boy who gets shangheighed along with six hooligan dwarfs who have stolen God’s time machine and are using it to pillage history. It’s got about half the Monty Python cast in it, has a closing theme by a former Beatle, and is the only Terry Gilliam movie to actually make money.

This is an early Linklater film which he made before he discovered what a pretentious bore he could be. It’s not really a movie, as much as a series of vignettes about philosophy. The good news is, you can be distracted, tune out, nap for half an hour in the middle, and still not miss anything important. Yet it makes perfectly capable viewing during your brief moments of attention. Nice music for the background, too.

Oh, are you one of those movie-club crowds that like to laugh at failure? Does weed put you in the mood where only the stupidest things are funny? Is it more fun to cut up with your friends than actually pay attention? But you say (we can hear you) that you’ve seen Reefer Madness, Manos: The Hands of Fate, Plan 9 From Outer Space, Birdemic, and The Room so many times you have them memorized?

We have you covered too. Be advised, these usually turn out to be attempts at horror movies:

Now see, wasn’t that better than the usual recommendations?

Readers, pitch in on this fun post to recommend your own favorite stoner party flicks! The comments below will do or the forum too.