Grinding on the go can be a bit of a headache. Using a rolling tray and getting the weed out of the grinder correctly can be difficult in a mobile situation. We take you through an in depth PenSimple grinder review to see if it really makes grinding and marijuana storage easier.

What Is The PenSimple Grinder?

PenSimple is a grinder that stores and dispenses ground up herbs. It is in the shape of a pen. The grinder portion is at the top, the storage container is in the middle, and on the bottom is a mechanical device that dispenses the ground herbs through a hole at the bottom. There is a cap on the hole so you can keep it sealed for on the go. 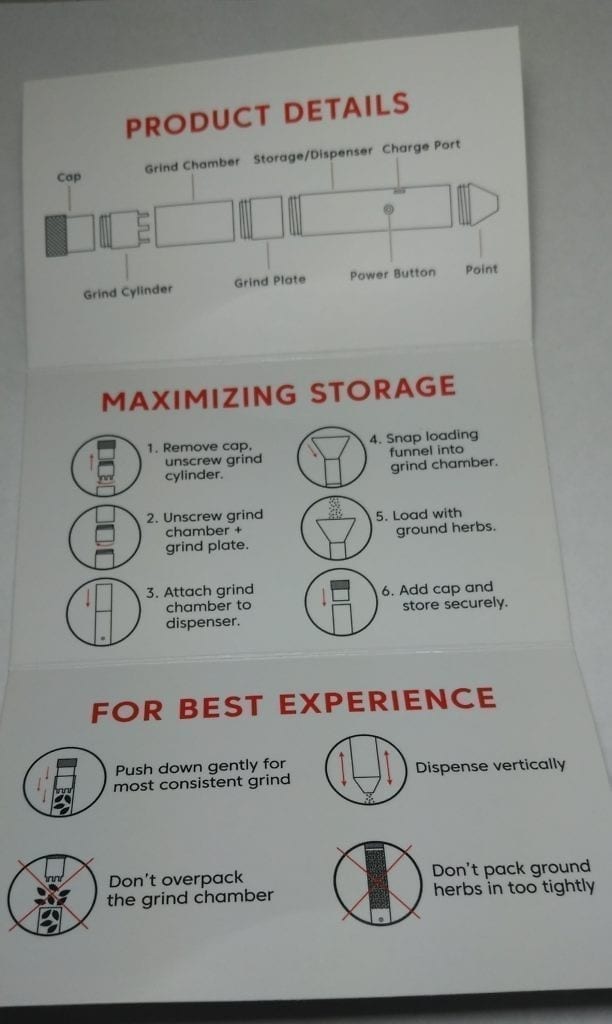 Advertisements have been everywhere for PenSimple and it is an innovative product, but as well see in our review of the PenSimple, it has flaws that hold it back from its full potential.

At first look, many people think that the PenSimple grinder is an electric grinder, but it is not. It is a manual grinder with an automatic, battery powered dispensing mechanism. It is quite long and is pen in style, but not in size.

I first thought it was an electric grinder like we saw in our Atman Mini Hummer review. The grinding is done on top by hand. The weed then flows through to the holding chamber. From there is can be electronically dispensed. I have to say I was disappointed when I realized it was a manual hand grinder.

Build Is Solid, Grinder Teeth Should Be Closer

The PenSimple grinder feels like a solid product. I even dropped it and everything worked fine. Its mostly all solid metal. Take a look at the parts included below.

The issue I had with it was the grinder teeth did not grind the marijuana fine enough. I will go through this more below.

Battery Lasts Quite A Bit

The battery lasts quite a while. This is expected once you know it is not an eletric grinder. Pen Simple is charged via micro USB. Easy and convenient. Never had an issue with the battery dying early.

Motorized Grind Would Be Nice

I was thinking that the Pen Simple grinder was an electronic weed grinder. This would make up for some of the work involved in grinding the weed. But the weed still needs to be ground. The same teeth issue happened on the Mini Hummer, but at least you could just pick them out really quickly since you ground a lot at once. Pen Simple’s grinding area is not very wide, so you have to grind a few times to build up some flower if you plan to take it on the go.

You end up having to grind over and over again to get any bud built up in the center (this is given that it works correctly. See below for explanation on clogging). If your purpose is to take this on the go, it ends up being quite a bit of work to get it going. It is easier to use a device like the Mini Hummer at home and just grind up a bunch of bud. Then roll the joints and blunts you want to take with you.

If you only hit pipes and bongs, then the Pen Simple might be something you could use. Again though, you could just grind up all your weed at once with a full electric grinder, and keep it in a small jar all ground up. This would be just as simple as the Pen Simple grinder. The clogging issue described below could keep you from using the item altogether.

The main feature of the PenSimple grinder is really dispensing. You can hold weed in it then dispense when you take the cap off. The problem is the herbs are quite often not ground finely enough to get through the dispensing tip at the bottom. 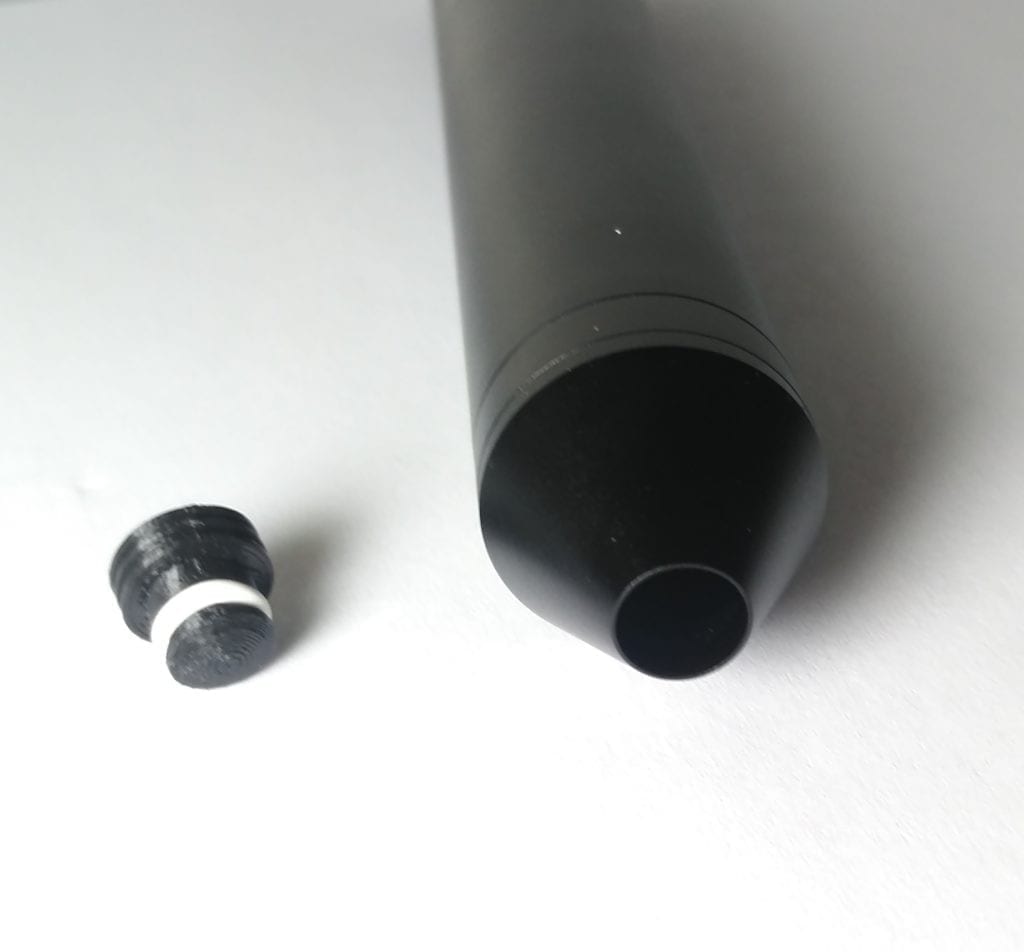 Make sure when you are grinding to do so slowly, this is your best bet to get it fine enough. It often leaves chunks of bud would get through that may be small enough for a blunt or a bowl but not a joint.

The dispensing tip then gets clogged by pieces of bud that are too big to go through the tip.

Other Users Complained About Clogging

Clogging happened enough that I could see why some people have complained about this. On the vape.guide they rated it a 8.9/10, but at the bottom all you have are complaints about the product that are similar to the issues I experienced.

Here is a quote from Mike:

“I used the product and found it entirely useless for its intended use. It’s grinder gums up on even “properly cured” dank. The dispensing system gums up spitting balls of what you can get past the impotent grinder.
My budget says anything over $60 that doesn’t live up to the hype gets One Star and no recommendation to purchase.”

“I agree with the comments from Mike here. This unit is really poor… After using it a few times, it is more hassle than using a traditional method. The thing is so huge that you can’t take it out unless you are a girl and carry a hand bag. Pen in the name is so misleading. Be warned – it’s rubbish.”

People just do not seem that happy with the product and it makes sense with the clogging. If it could have the clogging issue fixed it would have a lot more utility.

Basic Use Is Easy When It Does Not Clog

It is simple like the name when it works right. See the easy instructions below: 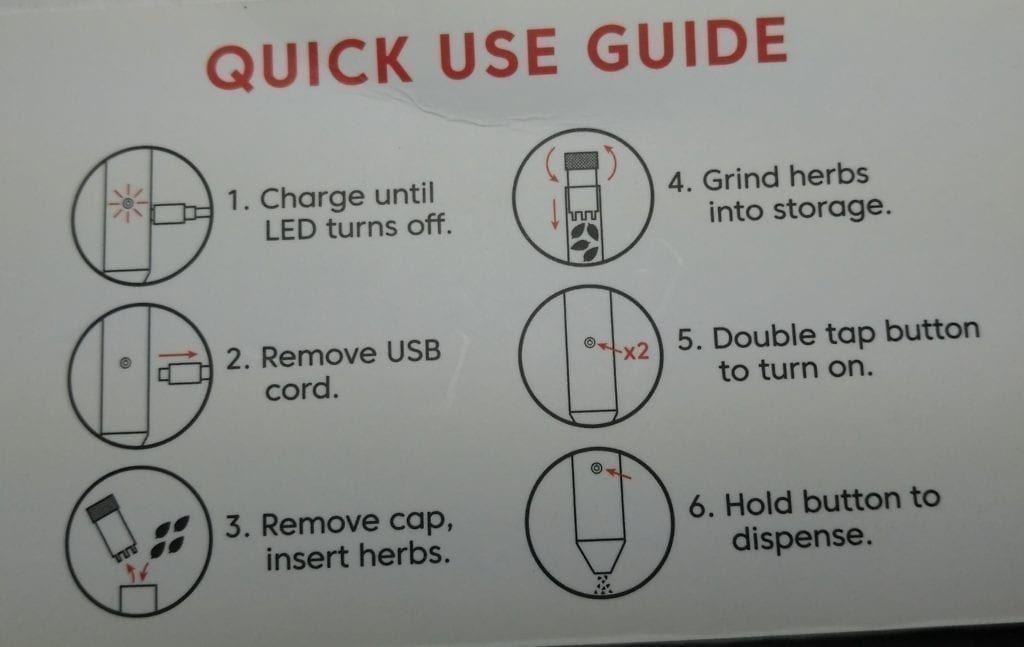 Size Is Larger Than Expected

The PenSimple grinder is pretty large. It is not something you can comfortably carry in your pocket. I do not believe the makers intended to misguide peopel, but if you have seen the ads for it you would think it is a much smaller grinder.

The Pen Simple Is A Bit Pricey

It is hard to justify the price of $69 for a manual grind and just the dispensing portion.  This might be worthwhile for someone that rolls a lot of blunts on the go or likes to have their bowls ground up. However, you could roll them up before you leave. For joint rollers like myself, the weed is often not fine enough and I found myself having to regrind manually with my hands. 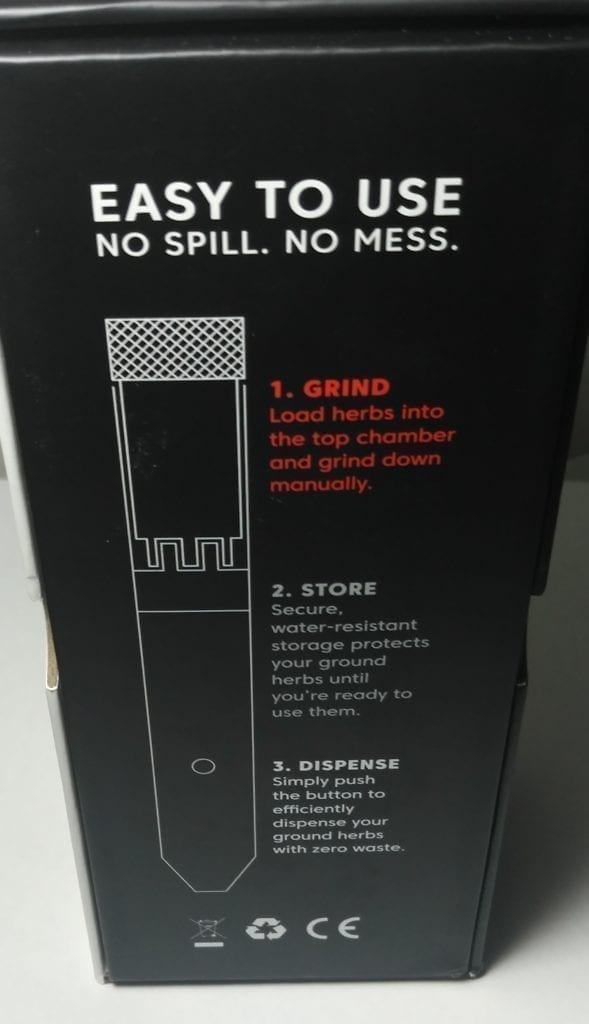 In conclusion, our PenSimple grinder review showed a high build quality product with some technical flaws. Adding motorized grinding and sharpening the teeth on this grinder could make it a very effective product. At the current time the product has issues with clogging that are persistent. At $69 for a manual grinder, it is pretty expensive too. Still some might find use in it for packing fresh bowls on the go or if they just like to try out the newest technology. For joint rollers, the Atman Mini Hummer is a better option. You can find the PenSimple here.