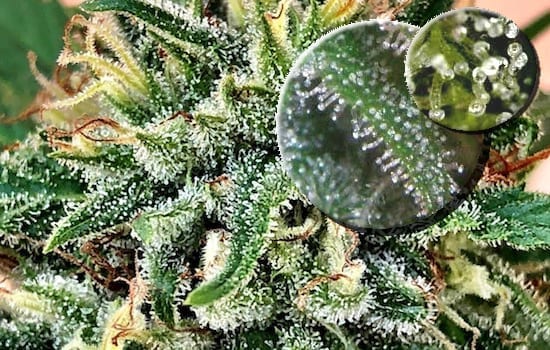 Trichomes are an aspect of plant morphology

Trichomes are best described as the “hair” growing on the outside of plants. These are present in plants, algae, and lichens. In cannabis strains, trichomes contribute to a fuzzy appearance, giving a flower an appearance of velvet, fur, or peach fuzz. For the plant, they function as a layer of protection against insects and other animals who would eat the plant.

Trichomes make a difference in cannabis because the hair-like structures house most of the plant’s cannabinoids and terpenes in resin and kief.

What is the function of the trichomes?

Trichomes serve some of the same functions as hair and skin in the animal kingdom: They help plants stay warm and moist. If exposed to frost, trichomes keep the ice away from more crucial plant cells. They help trap moisture from dew and protect against heat and wind. And of course, since many terpenes serve as insect repellent, it makes sense to distribute them in a hairy coating around the outside of the plant, where a pest will encounter it quickly before venturing further.

What is the difference between trichomes and kief?

Trichomes are the tiny hair-like structures sticking out around the outside of the plant. Kief is the crystalised, powdery secretions from these trichomes, sort of like sap leaking from a tree. Kief sifted from flower has traditionally been pressed into bricks called “hash.”

Do trichomes get you high?

They most certainly do, containing all the active ingredients of cannabis. They’re the part of the plant with the most concentration of the psychoactive compounds cannabis is famous for.