Home Culture Next States To Legalize Marijuana : Who’s In The Batters Box? 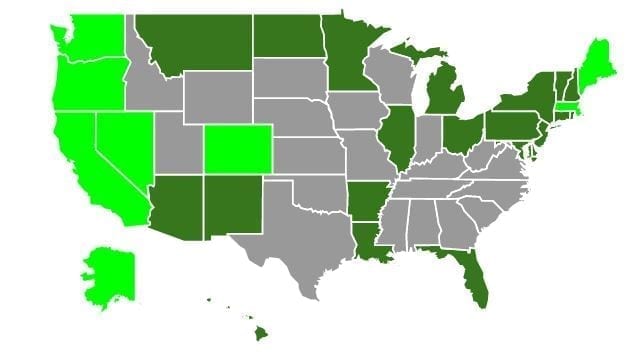 We have red states and blue states which isn’t anything new. Now we have green states too and I bet you’re wondering if yours intends to join them. That’s green as in ganja and half of the United States has already legalized it in some form. Out of 26 states (and the District of Columbia) that have adopted marijuana laws, only 8 have legalized it for recreational use. Weed grows like a weed which means that more states will be joining this movement. So who’s leaning green? Which will be the next states to legalize marijuana?

Are We Guessing About The Next States To Legalize Marijuana?

Unfortunately, we are guessing. No one can really know what the voters will decide. Be assured that we are making an educated guess. How can we do this? By looking at the states who have decriminalized weed. We’ll also check out states that tried to pass marijuana legislation and failed. States that still incarcerate people for having a seed probably won’t be next to legalize it.

The Next States To Legalize Marijuana – They’ve Been Trying

Looking back at the 2016 November election, some states passed marijuana laws while others didn’t quite make it. Let’s take a look at the states that barely missed passing marijuana legislation. When it comes to the next states to legalize marijuana, they’re the ones that are first in line.

In Vermont, Bill S.241, a bill to legalize marijuana, went before the Vermont senate in 2016 and passed. Unfortunately, the measure failed in the House. This bodes well for Vermont in upcoming years.

Studies show that Vermont stands to gain (or miss out on) around 75 million per year by regulating and taxing marijuana. If Vermont’s new Republican governor Phil Scott decides to get behind the bill, belief is that it will pass.

Missouri pushed for the passing of medical marijuana in 2016 by trying to get 2 different bills onto the November ballot. St. Louis fell short of the required signatures and neither bill ending up making it.

Polls had shown that 62% of Missouri voters were in favor of medical cannabis. Hopefully they’ve learned from the mistakes that ended up keeping the measures off November 2016 ballots. It looks like Missouri is ready to say yes, at least to medical cannabis.

Michigan stepped forward in 2016 as another state shooting for medical marijuana. Everything appeared to be in order until several thousand signatures were disqualified from the petition.

Polls again suggested that Michigan was ready to vote green. A petition campaign is already planned in Michigan for 2018. All signs look good notwithstanding another setback due to signature validity issues.

What happened to Arizona? They have medical marijuana already, though it didn’t pass by much in 2010. Arizona’s November 2016 attempt to legalize marijuana just barely missed passing with 52.2% against it.

This was a big loss for Arizona who surely could use the tax revenue. Weed News predicts that Arizona will wait until 2020 to try again. They could be right but things can change after they see the revenue California brings in.

The Next States To Legalize Marijuana Already Have Medical Cannabis

It’s not a set rule but there does appear to be a trend in the process of marijuana legalization. Many states first passed legislation on medical marijuana. After the benefits have been realized and society is still standing, the states then push for recreational weed. Below are examples of states trying to do exactly that. 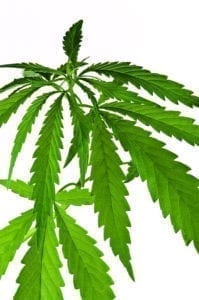 Patients have access to medical marijuana in Delaware and they decriminalized weed in 2016. State officials including senator Margaret Rose Henry have indicated a willingness to look into recreational marijuana.

It’s unclear whether they’re looking towards 2018 or 2020 but a recent poll suggests that 61% of voters would likely agree to comprehensive legislation. Again the pressure will be on once legal states start collecting revenue.

Rhode Island enjoys the freedom of care from medical marijuana. Word is that Rhode Island law makers could introduce legislation themselves. Any dragging of their heels will be followed by Regulate Rhode Island. This activist group dedicates time and energy to legalization efforts in Rhode Island. 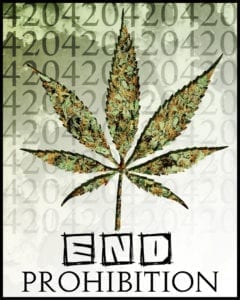 Governor Chris Christie makes it clear that he support recreational marijuana. The rest of the state doesn’t seem to share his sentiment. In fact, Senate President Stephen Sweeney contradicted the governor by stating his belief that marijuana can be regulated.

Governor Christie can have his stand which won’t last long. His term ends in 2018 and he no longer has good public approval numbers. New Jersey could very well make weed legal by 2018.

The great State of North Dakota has current medical marijuana laws. They already have the 2018 initiative drawn up to legalize recreational marijuana. It’s going to take 13,452 valid signatures to make it in front of voters. We’ll find out soon enough as petitioners have a March deadline to turn in the signatures.

Not every state can be said to be following a trend. Some are seeing the dollar signs and turning straight to either medical or recreational marijuana.

Oklahoma almost saw medical marijuana on the 2016 ballot. Printing deadlines held it up but it might the initiative could carry over to 2018. Oklahoma did vote to reduce the criminal penalties for possession of weed in the 2017 election. This bodes well for the future chances of medical implementation.

As it stands, Texas has no current legislation on marijuana. However, Senator Jose Rodriguez has introduced both recreational and medical initiatives in 2017. The medical bill seems most poised and likely to gain statewide support. We could see Texas law makers pass this legislation in 2017 or 2018.

Wyoming may be feeling the pressure from neighbors like Montana and North Dakota. Both already have medical legislation and are North Dakota has a current push towards recreational legalization. There was a vote in 2016 to legalize recreational weed in Wyoming and it lost horribly.

Why they didn’t push for medical marijuana first remains a mystery. Wyoming only needs a few thousand signatures to put their medical marijuana bill on the ballot. It does seem likely that the tough laws in Wyoming will ease, at least concerning medical prescriptions.

We could see some action from state legislatures before the end of 2017, but 2018 and especially 2020 will be key. By the year 2020, the full impact of recreational legalization by states like Washington, Oregon, Colorado, and California will be realized. Other states will be reading their revenue reports. You can be 100% certain of that.

The California Department of Finance reports potential annual earnings of $1 billion now that recreational weed is legal. Can you believe that? If California comes close or surpasses those numbers, every state without legal weed will do a head jerk. It’s our prediction that some action will occur through 2017-2019. 2020 will be another big year for marijuana reform. We’ll know for sure by then which the of the next states to legalize marijuana will be.