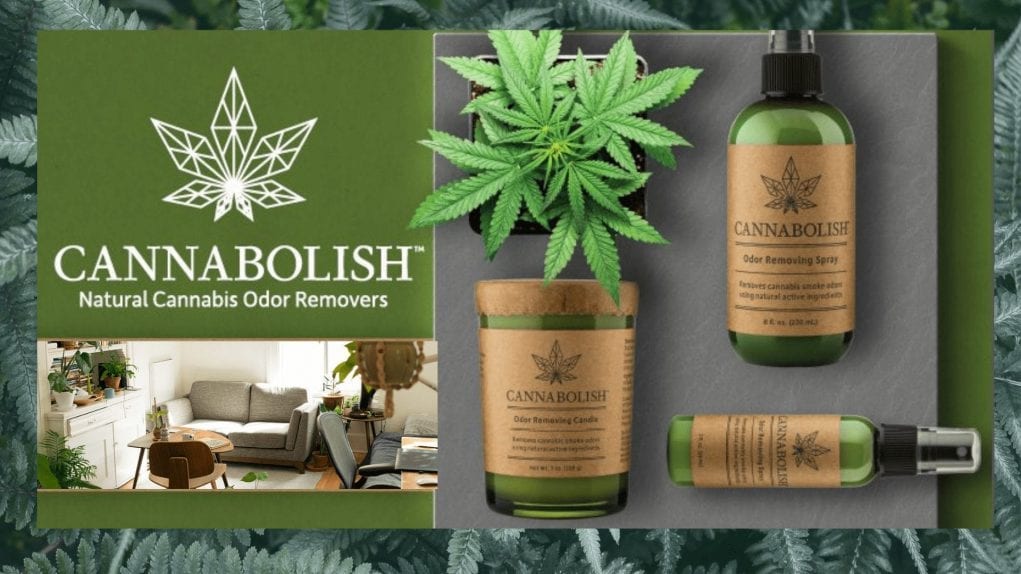 Cannabolish is a plant-based cannabis odor remover made with natural ingredients. It’s scientifically tailored to safely and effectively get rid of weed smell and destroy smoke odor molecules.

The odor you smell in marijuana smoke comes from compounds made in the plant called terpenes or terpenoids. These smelly compounds can removed by introducing similar terpenes from other plant oils (like “fighting fire with fire”).

They designed Cannabolish specifically to destroy the unique chemical makeup of weed smoke molecules. Their team of chemists and engineers use science that they have perfected over 30 years of removing the toughest odors around the world.

Keep your marijuana use discreet

Remove unwanted smoke odor’s from Cannabis and Tobacco, instantly and naturally. Weed, Pot, Marijuana, Dope, it doesn’t matter what you call it, the smell from Cannabis smoke lingers long after the buzz. Enjoy a smoke sesh without having to worry about the heavy smoke odor that clings to our clothes, cars, and furniture.

Leave the odor, Take The High

The Power of Plant Oils

There’s a saying in chemistry that “like dissolves like.” A more common version of this saying is “fighting fire with fire.” The smelly terpene compounds in cannabis smoke can be cancelled out by introducing similar terpenes from plant oils. In other words, Cannabolish uses terpenes from plant oils to fight odor’s from terpenes.

In a study of ingredients, the Natural Resources Defence Council found high concentrations of Di-ethyl Phthalate (DEP) in several popular air fresheners. According to the study, “(exposure to phthalates) can alter hormone levels and cause other health problems.”
Many studies have shown that dangerous chemicals can hide behind “fragrance” on product labels. Others Products have toxic acetaldehyde. It’s best to avoid masking products that include “fragrance” or “scent.” Cannabolish does not use scents or masking perfumes. Instead, it relies on natural ingredients like plant oils and water.

How to Use the Spray and Candle to Remove Marijuana Odors

Mist a few pumps of weed smell spray in areas where marijuana smoke smell are strong. The natural plant oils in Cannabolish find and eliminate weed smoke smells, without fake perfumes or harmful chemicals. Spray bottles are available in two sizes.
Carry the 2 oz. spray bottle in your purse, backpack, and luggage, for on-the-go smoke odor control as you travel. Or stash a bottle in your car glove box or center console to remove weed smells from your car.
The 8 oz. spray bottle works well for use in your house or apartment to get rid of pot odors in rooms, hallways, and common areas.

Set a chill mood with the Cannabolish weed smell eliminating candles and remove smells from weed smoke. Light the candle in rooms where odors are present, either before or after a smoke sesh. As it burns, the natural ingredients in Cannabolish find and eliminate pot smoke odor molecules.
Other scented candles contain harmful chemicals that are released while burning and synthetic scents to cover up odors. Cannabolish is clean-burning soy candle which has natural plant oils — no paraffin wax, phthalates, sulfates, and parabens.

Remove Smells From Baking With Weed

The process of making canna-butter or canna-oil for use in edibles (pot brownies, anyone?) can cause odor’s throughout your kitchen and apartment. Turn on your stove vent, open windows and light up a Cannabolish candle while you cook. As you wait for your edibles to finish baking, spray away any remaining odors with Cannabolish spray.

Get Rid of Marijuana Smoke Smell in Cars

Pungent weed smell can linger in cars long after the smoke clears. Because of the nature of weed smoke, it can embed deep into vehicle interiors, including seats, carpet, dashboards, cloth ceilings, and air conditioning systems.

Traditional air fresheners — like those pine trees, aerosol sprays, or vent clips — can temporarily mask pot odors. But they’ll just come back as fragrances wear off.
Stash a 2 oz. bottle of Cannabolish weed smell spray in your center console or glove compartment. It’s scientifically-designed blend was developed specifically to neutralize the odor molecules fro cannabis smoke. Just pump a few sprays in your air vents, on your seats and carpets, and in the air. Turn on your AC, and let it do the rest.

To Know More About Cannabolish…