Home Reviews Extracts Cannavative Shatter Review : The Best Shatter I Have Tried So Far
Cannavative is a cannabis company located in Northern Nevada. Here, we will review their shatter concentrate particularly the MTF strain. Overall, they put out the best shatter I have ever tried after trying different types in 3 states. For this review I used the Vivant DaBox and also mixed it in with joints.

Cannavative’s MTF shatter turned out to be so far the best shatter I have ever tried and I’ve tried different kinds from all over California, Colorado, and Nevada. Cannavative products are only available in Nevada at the current time. Hoping to see them pop into California and other states when legalization goes full scale. The only shatter I have come close to this level of quality has been from Moxie and for that I tried the California versions. Even though it was on par with strength, it felt like the Cannavative was of higher quality on other points.

Extract Quality was best of best

You can clearly see the quality of the Cannavative shatter just by looking at it. It has excellent color. It is completely stable. Most people like stable shatter which is crisp and hard like candy over unstable which gets all sticky. This is the highest quality shatter I have ever seen.

Strength was excellent, better than other shatters with higher THC %

Don’t let the THC percentage fool you. I have tried much stronger shatters including an 82% from Kabunky. This Cannavative overall still felt much stronger when you hit it. It was really top notch in strength even though there are stronger things out there. I would say one type of extract I found that’s close to this on strength is Moxie’s Cake Batter.

Effects were as stated, truly a euphoric, energetic concentrate

There was a great amount of energy with this shatter and it did not make me feel sleepy. I really like the effects and found it to be very pleasant overall. It did not feel “cracky” at all. I have never felt such “clean energy” from hitting shatter out of a wax pen.

An overall clear headed feeling went with the Cannavative shatter.

Best tasting shatter I have ever tried. Extremely impressed on taste here. Of course, given it’s from Nevada, there’s not going to be butane taste present. The shatter is very clean. It looks like it would taste good and it tastes just like it looks.

Smoothness, even on a sub-par wax pen

Again not only it is the best tasting, probably one of the smoothest shatters I’ve ever tried as well. I am not sure what they are doing to get it this smooth but I actually hit this using the DaBox dab pen which is usually pretty rough. And this shatter still came out with a nice smooth hit.

I also threw it in some joints and those joints burned pretty smooth. No extra harshness from the shatter.

Cannavative shatter was not cheap. I believe it was $40 for a half gram. However, this is on par with all other extracts that are in Nevada, save the occasional special. Luckily, prices have been coming down lately on a lot of extracts in NV. I would say the value here is really good. Considering the quality, taste and smoothness are all on point. I feel like I don’t have to hit nearly as much of this shatter to get the same effect which in the end really adds to value as well.

In conclusion, Cannavative’s MTF Shatter is the best shatter I’ve ever tried at this point.I look forward to trying the rest of their products. And if I do see their shatter on the shelf again, definitely something I’ll be getting!
You can learn more information about Cannavative extracts on their website here.
Have you encountered excellent shatters that have yet to be featured here in DabConnection? Did you like Cannavative? Have something else for us to review? Comment below or post in our forum! 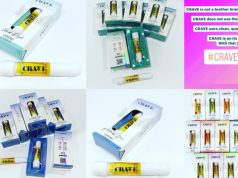 Cravemeds : A Large Black Market Operation Out of California

Tonix Concentrates : No License, No Regulation, No Information!