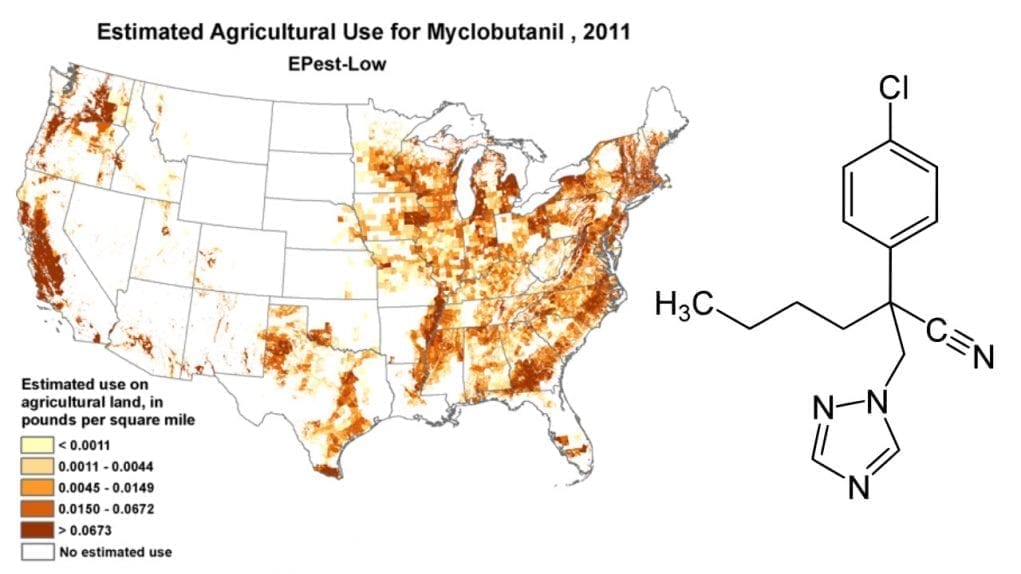 This fungicide is heavily used to control fungi affecting grapes, largely in California. California accounts for around 50% of all use of Myclobutanil in the US and has a number of other applications, used mainly with food and crops.

Myclobutanil has also been found to be used as a pesticide on marijuana.

According to Colorado Green Lab, “the passage of pesticides into the bloodstream varies considerably between inhalation and ingestion routes of exposure, and the application of high temperature is known to alter the chemical composition of myclobutanil.”

Though myclobutanil is stable at room temperature, it releases highly toxic gas if heated past its boiling point (205°C/401°F).  (Commonly used to ignite marijuana during consumption, disposable butane lighters can produce temperatures of 450°C+)

“As Myclobutanil decomposes, triazole, cyanide and chlorine moieties are released and form toxic gases, including hydrogen cyanide (HCN) and hydrochloric gas…Chronic exposure to dilute hydrogen cyanide (ex. 0.008 parts per million) is not immediately deadly, but is known to cause serious neurological, respiratory, cardiovascular, and thyroid problems. Cannabis retaining even marginal amounts of myclobutanil (ex. 0.03 ppm) could potentially expose consumers to non-lethal, but clinically relevant levels of HCN.”